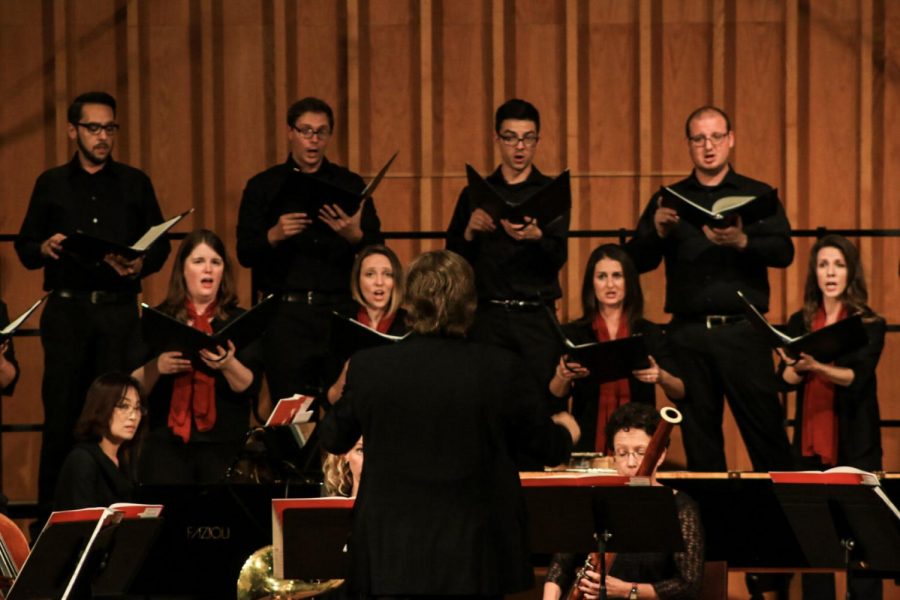 Cor Cantiamo is comprised of a professional chamber choir and seven professonal instrumentalists. The ensemble performed “The Seven Heavens: The Life of C.S. Lewis in the Planets of the Middle Ages” Thursday at the Boutell Memorial Concert Hall.

NIU School of Music hosted professional chamber choir Cor Cantiamo for the premiere of “The Seven Heavens: The Life of C.S. Lewis in the Planets of the Middle Ages,” a beautifully melodic and emotionally moving piece.

The chamber version of “The Seven Heavens: The Life of C.S. Lewis in the Planets of the Middle Ages,” was written by British composer James Whitbourn for Cor Cantiamo and seven instrumentalists. Whitbourn composed a separate version for the Belfast Philharmonic, which was written for a large orchestra.

The composition moves through the life of C.S. Lewis, author of “The Chronicles of Narnia,” using the seven medieval planets. The composition has seven sections, each named after one of the seven medieval planets of the middle ages: “The Moon,” “Mars,” “Mercury,” “Jupiter,” “Venus,” “Saturn” and “The Sun.” Lewis described these planets as spiritual symbols of permanent value, according to a press release from the NIU School of Music.

Whitbourn was working on the idea of using Lewis as inspiration for a composition when he found a book called “Planet Narnia” by Michael Ward.

“[Ward] wrote this book putting forward the hypothesis, very convincingly, that each of ‘The Narnia Chronicles’ relates to one of the medieval planets,” Whitbourn said.

Whitbourn worked with Ward to develop a theory that when Lewis’s life was broken down into seven parts, his life also related to the seven medieval planets.

The sections of the composition reflected the seven parts of Lewis’s life and the seven planets. The lyrics were written using medieval hymns, Shakespeare quotes and quotes from Lewis’s writing. The music itself never directly mentions C.S. Lewis, instead the show’s program included a narrative of Lewis’s life written by Ward.

The composition was well written and very well performed. In some sections, the voices of Cor Cantiamo created layered harmonies. In other sections, their voices blended together so smoothly they sounded like one voice.

Whitbourn said that he writes in layers of meaning, because Lewis wrote in layers of meaning. These layers were apparent in the composition. Each section was very dynamic in sound and emotion. The emotions felt during each section reflected the corresponding section of “The Seven Heavens” of C.S. Lewis’s life.