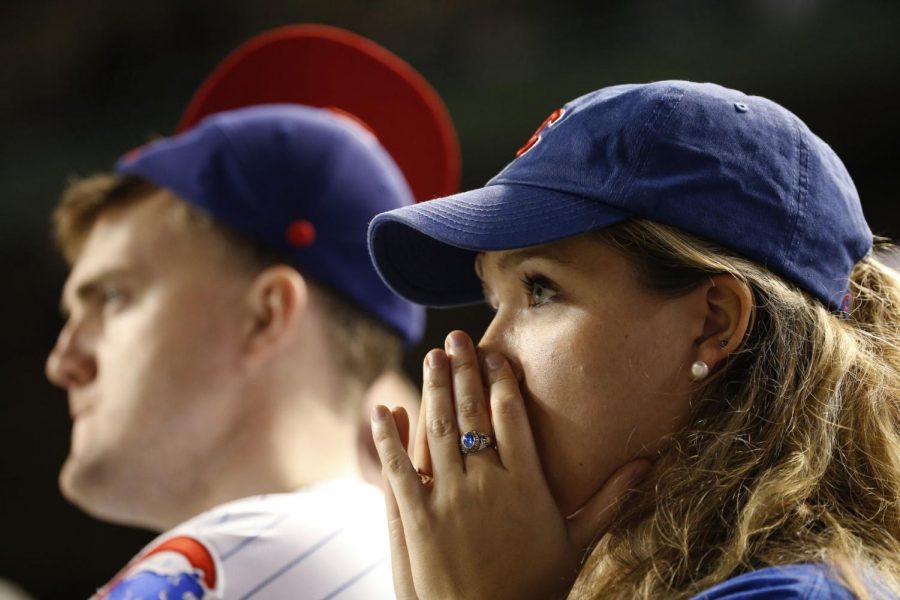 Chicago Cubs fans watch during the ninth inning of Game 2 of the National League baseball championship series between the Cubs and the Los Angeles Dodgers Sunday in Chicago.

For the last 108 years, Chicago Cubs fans have been deprived of celebrating a World Series in the streets outside the friendly confines of Wrigley Field. Fans anticipate that feeling of deprivation will soon come to an end.

Since 1995, the Cubs have been as close as five outs away in 2003 from a shot at the baseball holy grail — the World Series.

With former players such as starting pitchers Mark Prior, Kerry Wood and outfielder Sammy Sosa in the prime of their career, the 2003 Chicago Cubs looked to be well on its way to a World Series opportunity, especially after witnessing the team celebrate its game seven National League Divisional Series victory over the 101 game-winning Atlanta Braves at Turner Field in Atlanta.

A certain aura revolved around the Cubs team after winning the NLDS series, something similar to this year’s Cubs.

Fans hoped to see the team eliminate the young, inexperienced Florida Marlin’s led by Josh Beckett, Derrek Lee and rookie Miguel Cabrera, and the team was well on its way to doing so before the top of the eighth inning with one out in game five — forever changing Cubs history.

This game is forever known as the ‘Bartman game’ — when Chicago Cubs fan Steve Bartman’s reach appeared to interfere with outfielder Moises Alou while Alou was trying to catch a ball — which led to a collapse in the game and a collapse in the series, with the Cubs losing in game seven, furthering fan’s pain.

In 2008, the Cubs looked to reverse the curse as their 97-win season marked the teams most wins since 1945, which happened to be the last time the Cubs made it to the World Series.

With Lou Piniella, Cubs Manager and manager of the Year in 2008, leading the way, the Cubs looked at their veteran leadership as an advantage going into the playoffs.

The Cubs would again be swept in three games by the Dodgers in the NLDS, something that resonated with Cubs fans as many expected the same result last season when the 97-win team faced division rival St. Louis Cardinals in the NLDS.

With the roster filled almost entirely with young talent and playoff inexperience, the 2015 Chicago Cubs showed characteristics of a bright future as they completed the unexpected, cruising past the top two teams record-wise in the MLB, defeating the Pittsburgh Pirates in a one-game Wild Card and the St. Louis Cardinals in four games in the NLDS.

After being swept in four games by the New York Mets in the National League Championship Series last season, the team retooled and never looked back.

Instead of drowning in their sorrow, the Cubs used last year’s playoff run as a building block for all of their young talent.

The hype surrounding this team headed into going into 2016 became reality as the Cubs proved they are the best team in all of baseball with 103 wins on the season, their most since 1910.

Now, the Cubs find themselves in the same place as last year, in the NLCS and a chance to make it to the World Series. An obstacle they have yet to overcome for more than 70 years.

Curse or no curse, one thing is for sure: The 2016 Chicago Cubs are overflowing with talent. As they face off against starting pitcher Clayton Kershaw and the Los Angeles Dodgers, only one thing will be on the Cub’s mind: Redemption.

As Harry Caray, the former Cubs legendary announcer, once said, “[As] sure as God made green apples, someday the Chicago Cubs are going to be in the World Series.”

This may finally be the year Caray was referring to as seven games separate this relentless team from making history.