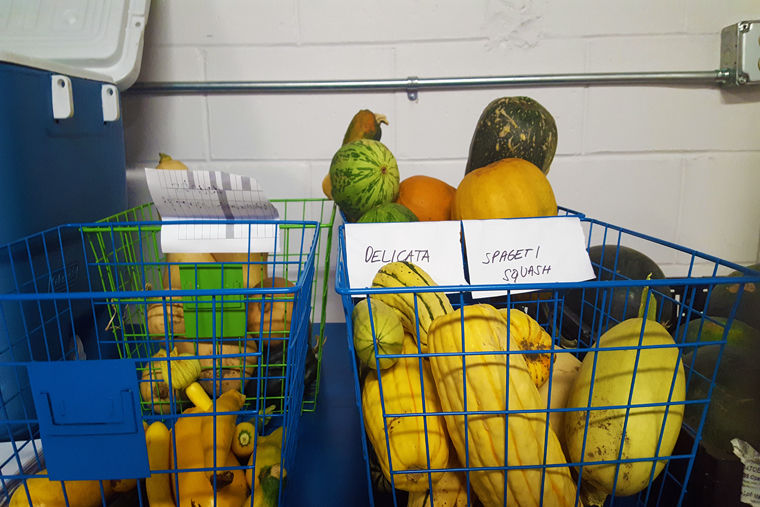 The Huskie Food Pantry gets vegetables from the DeKalb County Community Gardens.

Finding sustainable financial supporters has become a priority for the pantry, as its budget is decreasing. The state budget makes it difficult for officials at the food pantry to ask NIU for money, said Liz McKee, Huskie Food Pantry supervisor. She hopes the pantry will be sustained by enough involvement from the community.

The pantry is volunteer-operated and serves non-perishable foods and fresh produce from the DeKalb County Community Gardens and the Northern Illinois Food Bank. Students must have a valid OneCard for access. Students with a meal plan are not eligible for the pantry, according to the pantry’s website.

“[Typically, campuses] are finding some strong donors who really want to support [food pantries] and [work] on writing grants to support personnel,” McKee said. “So we’re looking at hiring [more] interns and currently have a donor who is very interested in supporting that, but we want to have a sustainable way to support interns. So, we’re looking at how [to do that] with that assistance now for a little, but then stand on our own and make sure we can move forward.”

University members, including officials from the Student Financial Aid office and Community Affairs, are coming up with action plans for students who are in a difficult living situation, so students who are facing living insecurities other than hunger can get by.

“We’ve done a lot of benchmarking with other pantries,” McKee said. “This year, [we’re going to] make sure we have food to provide to our students but also gather a lot of data to see how we can [run the pantry] better in the future, and I think we are being very successful in being able to feed our students, and I’m very proud and excited about that, but I think there are a lot of things we can do in the future.”

For her pantry internship, Sam Wrzesinski, senior family and child studies major, completed a benchmark interview consisting of how the food pantry at the University of Nebraska Omaha worked and included the methods the university uses and what fundraising events it holds.

Her role includes fundraising, coming up with event ideas and updating the pantry’s Facebook page.

“It’s just really nice getting to be a part of helping out the NIU student population, because I’ve never really had a job [on campus],” Wrzesinski said. “I feel that it kind of ties in with my major a little bit, at least like the population and demographic network serving.”

The food pantry became a NIU-supported operation this summer and moved from the Grace Place Campus ministry, 401 Normal Road, to the Chicken Evans Fieldhouse.

The food pantry’s new location is rent free and includes renovations, such as electrical work and redoing the carpeted floors.

“Now that I have gotten a start through the Huskie Food Pantry, I definitely would love to stick around and continue helping out NIU and [the] DeKalb community,” Wrzesinski said. “I just think it’s really important to give back because I got such a great experience here at NIU.”

A grand re-opening is being held Thursday at the food pantry.