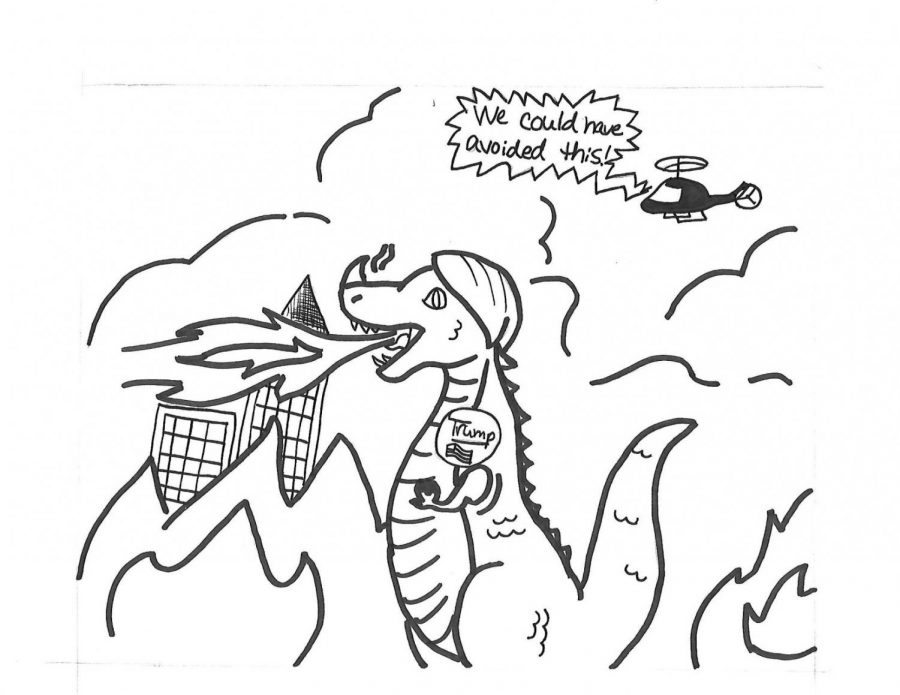 Students should not vote for Republican presidential nominee Donald Trump.

In the past few months, many newspaper editorial boards have chosen to endorse a candidate for the U.S. president; the Northern Star editorial board decided not to do that.

However, the Northern Star editorial board chooses to reject Republican candidate Donald Trump as a viable option for presidency.

The Republican Party failed miserably in presenting the American people with an acceptable candidate. Instead, America’s Grand Old Party has presented us with a reckless and unqualified billionaire businessman.

The Washington Post reported Sept. 13 that 62 percent of Americans believe Trump is not qualified to serve as president.

If Trump were to be elected, he would become the first president to do so without holding a political office or high military rank.The top item on his resume, chief executive officer, does not transfer directly to what is required of a leader of the U.S.

Trump’s experience in the business realm meets only one standard a president needs: financial experience.

Other than financial experience, a president needs to understand how to speak with other world leaders, manage the largest military in the world and be the voice of a nation.

Trump has contended that his financial experience will help him solve the nation’s rising deficit. Even though this may be true, he lacks experience in many other important areas such as foreign affairs, national security and education.

There has been much deliberation about Trump’s temperament which was on display in the three presidential debates. During the debates, Trump spoke impulsively with continuous interruptions of the moderators and his Democratic opponent Hillary Clinton.

In the final moments of the most recent Oct. 19 debate, Trump said “such a nasty woman,” into his microphone as Clinton answered a question about raising taxes.

“Nobody has more respect for women more than I do,” Trump said earlier in the debate.

This inconsistency has happened many times throughout Trump’s campaign.

Trump mocked women who had come forward to announce he had sexually assaulted them in the past at a campaign rally in Greensboro, North Carolina, which was five days before the Oct. 14 debate, according to a Huffington Post article.

“Believe me, she would not be my first choice; that I can tell you,” he said of one of the women.

These three presidential candidates on the ballot have political experience. Clinton most recently served as U.S. Secretary of State from 2009 to 2013. Johnson served as governor of New Mexico from 1995 to 2003. Stein has served on a number of medical boards since 1998 and ran for governor of Massachusetts in 2002 and 2010.

These nominees have the experience to lead people and make levelheaded decisions—experience Trump does not have.

Although Clinton leads the popular vote at 49.5 percent, Trump only trails by about 6 percentage points at 43.6 percent, according to fivethirtyeight.com.

The Northern Star editorial board refuses to believe in the old adage that voting for a third-party candidate is a waste of a vote, especially in an election in which public opinion of the two main party candidates is so low.

In a year that presidential campaigns have focused more on the entertainment side, there are still a lot of voters on the fence about who to vote for.

An endorsement for a candidate other than Trump is not necessary, as it is not our job to tell people who to vote for.

However, we feel it is our responsibility to discourage all voters from voting for Trump.