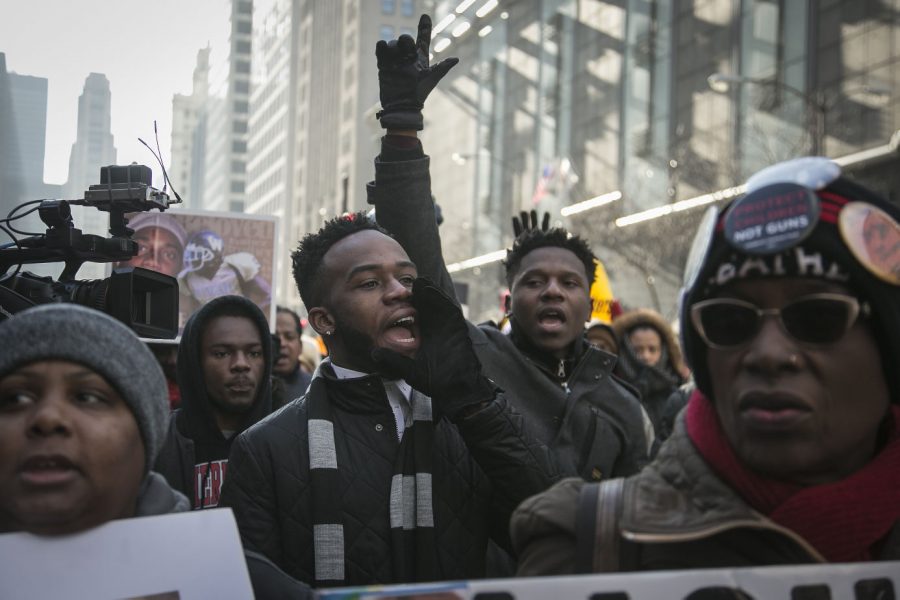 NIU junior Alirius Clinton, friend of Quintonio LeGrier who was shot and killed by Chicago Police Dec. 26, protests with Father Michael Pfleger against gun violence in Chicago on Michigan Avenue on Dec. 31. LeGrier’s high school and NIU’s Black Male Initiative plan to create a scholarship and GPA club, respectively, to commemorate his accomplishments.

LeGrier was killed after “an incident with Chicago police” on Dec. 26, according to a Jan. 5 campus update. LeGrier, 19, died from multiple gunshot wounds and his death was ruled a homicide, according to the Cook County Medical Examiner. LeGrier attended Gwendolyn Brooks College Preparatory Academy before attending NIU.

The scholarship will be awarded to a student who has shown that they have persevered through obstacles at the school and at home, which can be demonstrated creatively through poetry, song or essay, said Daniel Bauer, assistant principal of Gwendolyn Brooks College Preparatory Academy.

“Any kid that wants to make a reality on that kind of impact deserves it,” Bauer said.

The Quintonio LeGrier Determination Award, named for the determination shown by LeGrier in his time at Gwendolyn Brooks College Preparatory Academy, will be awarded to one student on college signing day, 6 p.m. May 18, Bauer said.

In high school, LeGrier and a group of 40 students participated in the October 2013 Bank of America Chicago Marathon and raised $12,000 to allow for clean water to reach children in Africa, Bauer said.

LeGrier ran through Team World Vision which provides a lifetime of clean water to a needy child in Africa for every $50 raised, according to the organization’s website.

Bauer said he admires any high school student that would run a marathon to help children obtain access to clean water.

Reginald Bates, former president of Black Male Initiative, said he was a community advisor in Neptune Residence Hall and knew LeGrier for about two years. The two got to know each other better when LeGrier joined Black Male Initiative in October with hopes of eventually becoming the president.

This semester Black Male Initiative’s goals will be to emulate LeGrier’s drive by bringing back their fitness club and adding a 4.0 GPA club to commemorate LeGrier’s accomplishments, Bates said.

Bates said it is sad to know LeGrier can not continue to carry forward Black Male Initiative’s mission, but his legacy will still live on.