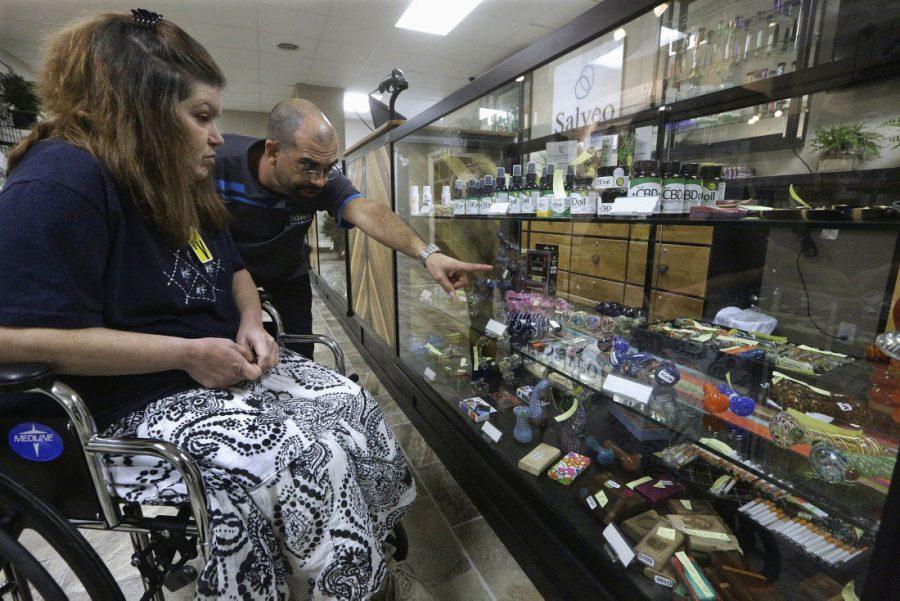 Shamay Flaharty, of Lewiston, Ill., who has multiple sclerosis and is hoping cannabis will help ease her pain and headaches, meets with Eric Sweatt, partner and manager of Salveo Health and Wellness, a licensed medical cannabis dispensary, on Oct. 20 in Canton, Ill. Illinois will begin its first medical marijuana sales this week.

Decriminalization of marijuana possession in Illinois may be losing steam as the two bills hoping to do so have lost traction.

“It has been no secret that we incarcerate far too many people, particularly for non-violent drug crimes including marijuana possession,” Cassidy said. “Having passed medical marijuana, the time is ripe to go after the destructive and unfair legal structure we currently have.”

SB0753 was placed in assignments on Oct. 10 and for the time being “is not going anywhere,” Noland said.

The second bill had passed both houses four months after its filing on Jan. 16, but was vetoed by Gov. Bruce Rauner on Sept. 9. HB0218 would result in a decrease of 115 inmates with $29 million in potential cost savings over the first 10 years after enactment, according to the bill.

Noland and Cassidy were active in the creation of both bills and hope to come up with a similar one during the next session after resolving what was objectionable for the governor and members of the General Assembly, Noland said.

“The bills should be looked at not so much as individual bills but an issue, and issues in Springfield never die, they never go away,” Noland said.

Rep. Bob Pritchard (R-Hinckley) said he is against any bill that encourages marijuana use because it impairs brain function and slows reaction times.

“A similar legislation was not passed last year,” Pritchard said. “I just do not understand why you would need to take something to cloud your mind and cloud your experiences. There are plenty of things to do here.”

A third bill, HB4276, filed by representative Ken Dunkin (D-Chicago) on Aug. 25, would establish the Cannabis Regulation and Taxation Act, which would legalize the sale, possession and consumption of cannabis and cannabis accessories.

If passed, an excise tax would be imposed on the sale or transfer of cannabis at a 10 percent rate.

“What this bill is doing is allowing an individual to grow or to possess way more amounts recreationally, not medically,” Pritchard said. “I think we have to be very cautious about making it easy and turning our state into a state like Colorado.”

Colorado was ranked third of best economies in the United States, and Illinois was tied for fifteenth, according to a 2015 Business Insider study. Colorado also saw marijuana tax revenue of $40.9 million nine months after legalization — not including medical marijuana licenses and fees — of which the state allocated $8 million for youth prevention and education, mental health and community-based developmental programs, according to DrugPolicy.org.

“If you got an addictive drug that you are pricing high, you’re going to have a growing economy, but how is that productive?” Pritchard said. “To me, a growing economy is creating wealth, make something, make a product that you can sell. That to me is economic growth. That is where you are adding value to the economy and the society.”

Colorado also saw a 32 percent increase in marijuana related traffic deaths from 2013 to 2014, accounting for 20 percent of all traffic deaths in 2014, according to a study done by Rocky Mountain High Intensity Drug Trafficking Area.