The Return brings Beatles music back to life 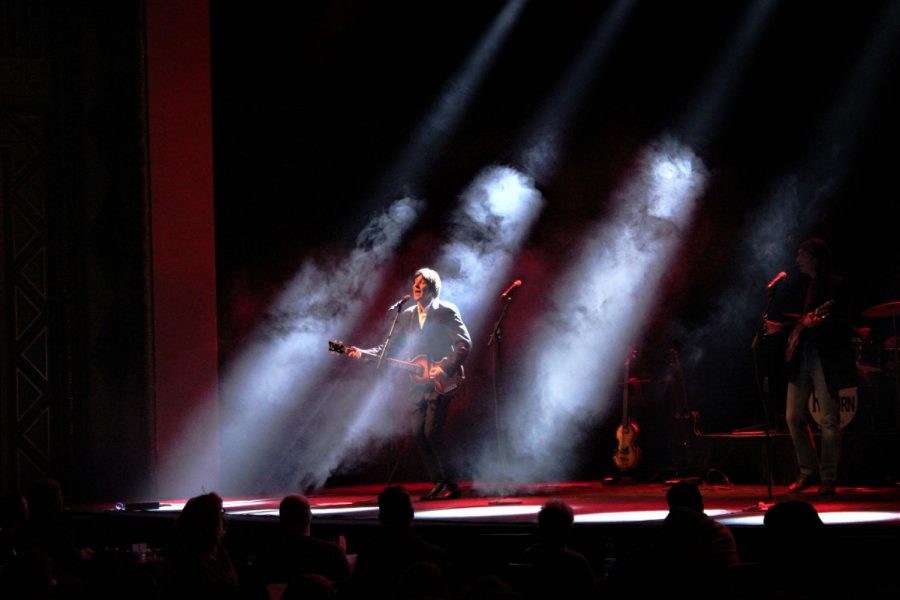 DeKALB — When the lights dimmed on the Egyptian Theatre stage, four Georgian musicians rushed on and became the iconic, Liverpudlian, mop-top Beatles.

The Return, an American Beatles tribute band, performed Friday with a mix of the early hits and later classics of The Beatles at the Egyptian Theatre, 135 N. Second St. It was an excellent tribute starring Richard Stelling, Shane Landers, Michael Fulop and Adam Thurston as John Lennon, Paul McCartney, George Harrison and Ringo Starr, respectively.

Dressed in matching black suits with “Beatle boots,” The Return performed many hits from the early Beatles’ albums, including “A Hard Day’s Night,” “Help!” and “Beatles for Sale.” Since the weekend of the performance coincided with the anniversary of the famous “Ed Sullivan Show” appearance of The Beatles, The Return started out its performance with Sullivan’s introduction of The Beatles and the song “I Want to Hold Your Hand.”

The band’s biggest challenge is emulating The Beatles, Thurston said. However, The Return imitated with ease. The Return replicated the musical style and mannerisms of The Beatles perfectly. This could be seen through Stelling chewing gum like Lennon and Landers, a right-handed guitar player, playing a left-handed Hofner bass with ease.

“Everyone has a favorite Beatle,” Landers said. “So when you’re on stage playing the songs, the audience looks at you very closely. It’s almost like religion.”

The musicianship of the band was impressive with Landers and Thurston on the bass and drums. They did a marvelous job imitating Starr and McCartney’s styles and made the audience feel like it was the `60s.

Fulop and Stelling played on a wide arsenal of guitars, including semi-hollow, solid body and acoustic, and they replicated Harrison’s solos and Lennon’s rhythm. Stelling also played the harmonica on songs like “Love Me Do” and “I Should Have Known Better” which added a touch of blues influence. Stelling, Landers and Fulop took turns playing the piano both as a rhythm and leading instrument.

The set continued with classic hits like “Eight Days a Week,” “Help!” and “Love Me Do.” While The Beatles are known for innovative studio albums like “Sgt. Pepper’s Lonely Hearts Club Band” and “Abbey Road,” the band’s early hits had simple but effective melodies. The Return showed that even without orchestras and studio gadgets, the Beatles could stand on their own.

The group also had great chemistry with the audience. With every song the the band played, the theater boomed with people singing along to timeless lyrics. On the song “Eight Days a Week,” The Return instructed the crowd to clap and would stop singing, letting the audience take over.

“There’s an energy with the audience,” Landers said. “There’s a pure joy when people hear the songs, remembering their past or people who have passed.”

After intermission, The Return walked onto a darkened stage to the sound from “A Day In The Life” and “Blue Jay Way.” When the lights came on, the group was dressed like the Beatles from the late `60s.

The set began with the first two tracks off “Abbey Road:” “Come Together” and “Something.” Much of the setlist matched the band’s apparel with psychedelic tracks being played, including “I Am the Walrus.” Unlike the first half, which had minimal lighting emulating The Beatles’ days in The Cavern Club, the lighting effects in the second half reflected a more stylish, psychedelic setting.

The classic, more subdued songs of The Beatles, including “Yellow Submarine” and “Here Comes The Sun,” also made it into the show. Both of these songs were a good change of pace and gave Thurston and Fulop a chance to sing. For the most part, the lead vocals were handled by Stelling and Landers as Lennon and McCartney.

With Landers on piano and Fulop, a right-handed player, taking up Landers’ left-handed bass, The Return began to round out its set by playing “Hey Jude.” The audience sang along and waved. For the final chorus, the band stopped singing, and the audience loudly took over.

After departing the stage, the group returned for one last song, “Back in the U.S.S.R.” The song was a rousing conclusion and finished a great night of music.