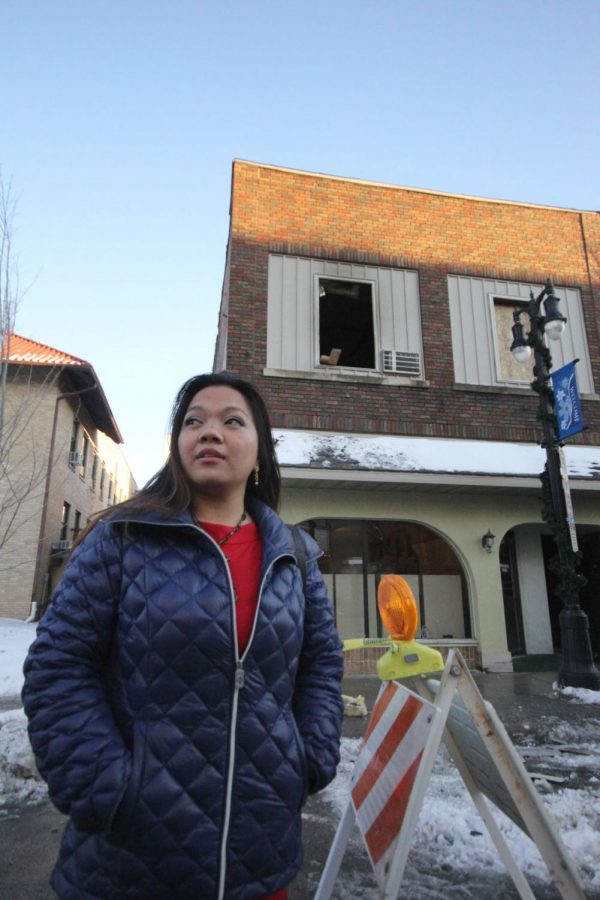 Gladys Sanchez, junior special education major, stands in front of her burned-out apartment building on Third Street. Sanchez and her son, Buddy, 6, lost their home and most of their possessions in a Jan. 7 fire, but the DeKalb community has raised more than $8,000 to help them start over.

Gladys doesn’t know if it was the screaming or smoke that woke her.

She remembers sitting up in bed and seeing her friend batting at a patch of fire spreading across a painting on her apartment wall. She ran to the extinguisher and turned around to use it. It took about 15 seconds, but by the time she pressed on the extinguisher and found it wasn’t working it was too late to try anything else: The fire had reached the ceiling and the smoke was unbearable.

Gladys fled the apartment with her friend and son, 6-year-old Buddy. Halfway down the stairs she realized they’d left behind a dog they’d been pet-sitting — Naya, a mixed breed — and Gladys went back. Saving Naya was impossible, though: The smoke was overpowering and Gladys had to turn around and follow her son and friend outside the apartment.

“We couldn’t breathe,” she said. “I remember going in the room looking for the dog, but I was … coughing so hard, I was like, ‘I have to go.’ … I was the last person out because I kept trying to look for this dog.”

They stood in the snow until Gladys’ friend was able to hail a driver who called 911. Gladys didn’t care about the cold — there was a low of -9 degrees that night, Jan. 7 — or the loss of all the possessions she’d worked for years to acquire.

She was just happy to have Buddy safely beside her.

The fire wiped out almost everything Gladys Sanchez, junior special education major, and Buddy had. A DeKalb Fire Department news release attributes the fire to an unattended candle: Gladys said it was left burning after a long day of celebrating Buddy’s sixth birthday. She expected someone else to put it out, she said, but they all fell asleep.

The fire caused about $100,000 in damage to the Third Street apartment building, and Gladys’ apartment had “extensive fire and smoke damage,” according to a DeKalb Fire Department news release. Another apartment in the building had smoke damage, and a business underneath the apartments had water damage.

There was no furniture left after the fire, and Gladys — who had been taken in by a friend for the night and was put up in Northern View by NIU for a week — quickly realized she didn’t have money to put down for another apartment.

That’s where her friends throughout the DeKalb community stepped in: Gladys’ coworkers at Career Services donated clothes, her friends salvaged the apartment and found some of Buddy’s baby clothes and his baby book and Gladys’ Alpha Phi Omega service fraternity brothers made her food. Other Unitarian Universalist Fellowship members wrapped gifts for Buddy, who celebrated his birthday the day of the fire, and gave them to him to help replace what was lost.

Gladys’ family — as she calls them — at the Unitarian Universalist Fellowship of DeKalb set up a GoFundMe account to gather monetary donations so Gladys and Buddy would have money for a new apartment.

GoFundMe is similar to Kickstarter in premise: Users create a campaign and set a goal for how much money they want to raise. But, GoFundMe focuses on helping people through fundraising, while Kickstarter is used to gain money to create and sell products.

Gladys’ GoFundMe raised more than $1,300 in 21 hours starting Jan. 9. Organizers raised the goal, hoping they could get $6,000 in donations for Gladys to use for furniture. Again, the group met and then surpassed its GoFundMe goal, and by Wednesday night more than $8,100 had been donated through GoFundMe to help Gladys and Buddy.

The support reaches beyond donations, though, Gladys said: People have stopped her on the street to ask how she’s doing and tell her they’ve been worried about her.

Receiving instead of giving

Gladys has always tried to reach out and help others: Among other things, she teaches religious education at the Unitarian Universalist Fellowship, helps the non-profit DeKalb County Community Gardens and works with women through Safe Passage, a domestic violence and sexual assault prevention agency.

She’s tried to teach Buddy to be the same, and this year they were gathering donations for Mooseheart, which provides care for children in need in Chicago, when the fire struck.

The feeling of receiving so much was new to her, Gladys said.

“I guess I didn’t know how it felt because that’s what I do,” Gladys said. “I want to help people out and give to people. … I got a call from a friend from NIU We Care and she said, ‘OK, I’m going to ask you what you need, but you can’t be Gladys. You have to be somebody that’s going to accept the help, you have to tell me the truth what you need … .’”

That outreach has shown Gladys she is loved, she said.

“It’s such a beautiful thing. Who was it that told me the love that I give to the world is coming back full circle?” Gladys said. “All that positive energy is finally giving me back a hug — like, a really big hug — because that’s what it feels like. I feel like I’m levitating.

“I can’t question anymore, ‘Does someone love me?’ And I used to. … Now, it’s just like this amazing feeling … and I want everyone to feel that way because it feels really good.”