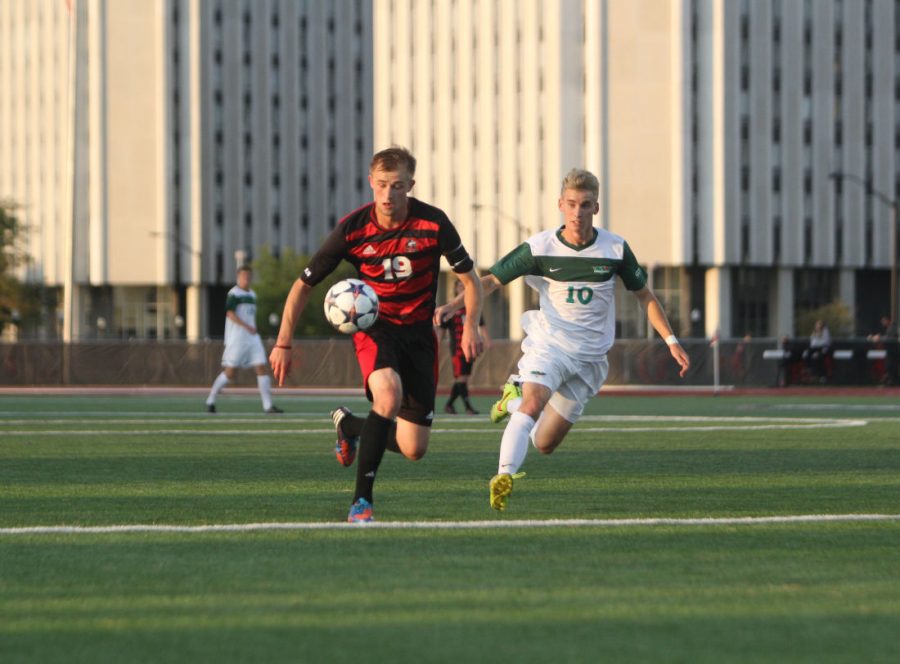 Senior defender Dusty Page (19) looks to play the ball Sunday against Green Bay at the Soccer and Track & Field Complex. Page and the Huskies upset the No. 23 Illinois-Chicago Flames Friday and tied the Green Bay Phoenix Sunday.

Men’s soccer (2-2-2) opened up its first pair of home games with back-to-back solid performances that resulted in a 1-0 victory against the No. 23 Illinois-Chicago Flames (3-1-1) Friday and a 2-2 draw against the Green Bay Phoenix (3-2-1) Sunday at the Soccer and Track & Field Complex.

Sophomore forward Chris Paton scored a goal in the 74th minute, which was enough to give NIU the win at home against the Flames Friday. Senior goalkeeper Andrew Glaeser played a key role in the match, recording four saves. Paton posted five shots with three on goal.

The first half showed attempts by both teams, as UIC was finding most of its attacks on the Huskies’ left side, where multiple shots and flair plays occurred. Senior midfielder/forward Isaac Kannah showed his fair share of talent, creating opportunities and making passes while also taking two shots beyond the 18 that went high.

The action in the second half began with a save by Glaeser after UIC’s Zack Judickas got a header on target. Just one minute later, the Huskies were rewarded a free kick that resulted in a scramble in the box as senior Dusty Page got a shot off a rebound. The attempt was blocked and that rebound found freshman Len Heinson, but his shot went high.

In the 69th minute, Heinson found another opportunity after hitting the ball off a volley shot from a corner, but his attempt was blocked by UIC goalkeeper Andrew Putna.

The Huskies were finally able to find the back of the net on a combination play after Kannah connected a pass with sophomore Richard Hall. Hall found Paton in the box, and he placed the ball out of the reach of Putna for the game’s lone goal.

After a win Friday, the Huskies tied the Phoenix in an intense game that saw the Huskies down 2-1 before Bertrand Gaschot scored a goal in the last 30 seconds of the game to tie it up for the Huskies. Gaschot recorded five shots with two on goal and one assist, along with the goal.

“Scoring felt good, obviously,” Gaschot. “It was awesome to score in the last 30 seconds. We didn’t come out too strong, but it was good to see that we can come back after being down on the scoreboard and down a man in overtime.”

Kannah scored the first goal for the Huskies in the 55th minute with a header from a cross by Gaschot. Kannah finished the game with two shots, one goal and one assist.

“We started off bad tonight,” Kannah said. The “first half was not that good, but we turned it around and thanks to our great leaders we turned it all around and we ended up getting a good result.”

Green Bay’s Audi Jepson opened up the scoring in the 26th minute of the game. The Phoenix’s second goal game from a free kick that was placed just out of Glaeser’s reach.

“There’s not a lot of teams in the country with the resiliency to come back in the last 30 seconds of the game to at least get a point out of it,” Luzzi said. “Green Bay is a really decent team; they have good pieces. I feel like we gave them an easy pass in the first half. We just have to get to the point where we give 90-minute performances. We are a good team now, but we are not an outstanding team yet. This team has the potential to do big things.”