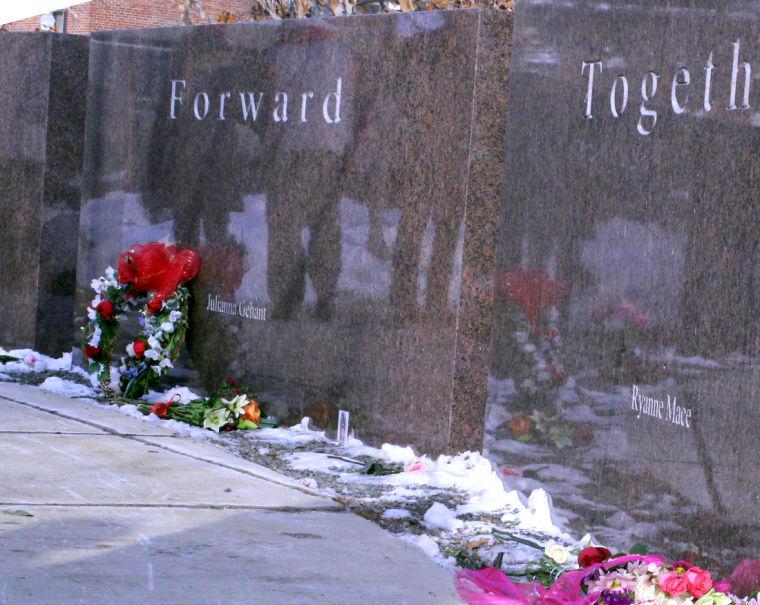 Memorial stones stand in front of Cole Hall to honor the students who were killed Feb. 14, 2008.

Gary Parmenter was surprised to see a bit of Tugs rope left in the Peaceful Reflection Garden in front of Cole Hall Friday.

“Oh, how special,” Parmenter said of the rope, which laid at the base of the memorial stone for his son, Dan, who had battled his way through Tugs as a fraternity member before his death at 20 years old.

Dan Parmenter was a victim of the Feb. 14, 2008, Cole Hall shooting, when gunman Steven Kazmierczak killed five students before killing himself. Friday, the victims were remembered with five bell tolls and a moment of silence at 3:06 p.m. Despite the lack of ceremony and 16-degree weather, dozens gathered at the Peaceful Reflection Garden in front of Cole Hall to pay their respects.

Among the crowd were family members and friends of the victims, community members and students who, though they hadn’t attended NIU in 2008, wanted to show they honored victims Catalina Garcia, Julianna Gehant, Ryanne Mace, Gayle Dubowski and Parmenter.

“It shows how much the university values all their students as a family, which draws us all closer together,” said Gary Parmenter, who, to escape the cold, stepped inside Cole Hall after the Friday ceremony for the first time since its reopening in 2012.

Those who wanted to listen to the bell tolls at the memorial garden fell silent as they approached Cole Hall. Flowers, prayer cards and mementos were left in front of the stones, and the victims’ family members embraced as the bell rung out five times.

In years past, the victims were honored on the anniversary of the shooting with a wreath-laying ceremony where hundreds gathered to hear speeches from the university president and Illinois governor. The anniversary was small this year to reflect “the continued healing of our campus community, while still ensuring that Gayle, Catalina, Julianna, Ryanne and Daniel are not forgotten,” according to an NIU announcement.

University marketing director Brad Hoey, who stood in front of Cole Hall during the moment of silence Friday, said honoring the victims has become “less communal” as students who were at NIU in 2008 have graduated, but the “personal factor has taken over” and more people now reflect on Feb. 14, 2008, in their own way.

Hoey said the Peaceful Reflection Garden — where five stones mark the victims’ name and a statue, Remembered, reaches toward the sky — is “hallowed ground” and he often sees students on the garden benches or strolling by.

“Always somebody remembering those who we lost,” Hoey said. “It’s a gathering place.”

Among those who gather regularly is Maria Krull, Northern Star business adviser, who takes a group of Northern Star student employees to the memorial every Feb. 14 and tells them what Dan Parmenter was like: “full of promise, caring, committed.”

“And I told them in particular to live [life] to the fullest because he really couldn’t,” Krull said. “Be the best they can be.”

The victims’ legacies continue in other groups: Recipients of the Forward, Together Forward scholarship, which honors the Feb. 14, 2008, victims, were present at the garden for the moment of silence, though none attended NIU when the shooting occurred.

“[It’s nice] that the university recognizes the importance of this occasion for students, family, friends to remember, get together,” Gary Parmenter said. “I think each of the families and students look forward to this time every year,” so they can remember the students.

He didn’t want to take the Tugs rope, though, because it was part of another person’s way of remembering his son.

“I will leave it here in case the Pikes come back to get it.”