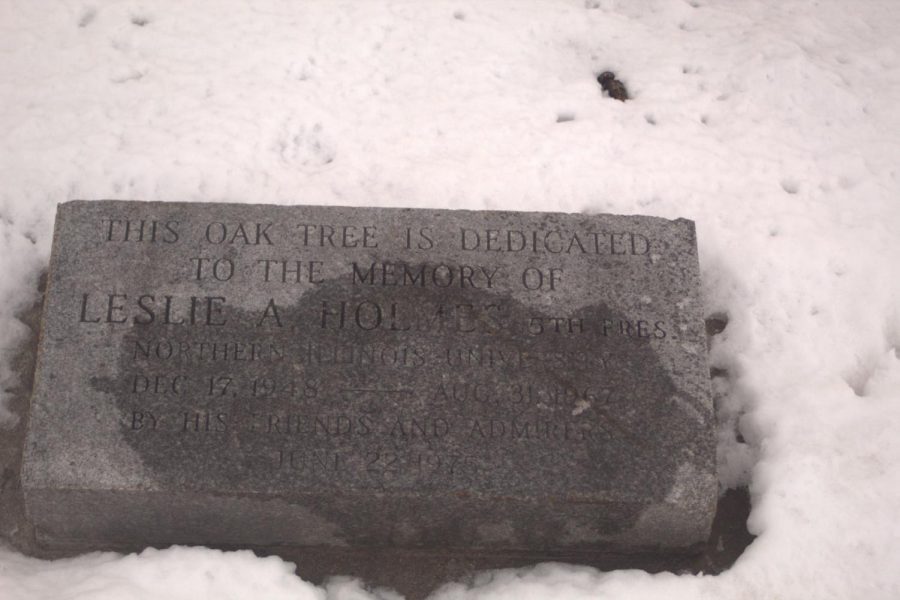 A plaque placed below the tree has Holmes' name and dedication written on it for students and anyone who walks by.

On the East side of the Holmes Student Center, facing Normal Road, is an oak tree with a plaque dedicated to a man named Leslie A. Holmes from 1975. While this tree may go unnoticed at times, the oak and the student center behind it are both named in honor of a man who played a large role in the development of Northern Illinois University.

Born in Freeport, Illinois, Holmes received a doctorate in geology from the University of Illinois Urbana-Champaign in 1942 after teaching the subject during the Great Depression in Chicago high schools.

Holmes became NIU’s fifth university president in 1948, after the death of president Karl Adams. Once in office, Holmes sought to expand the university, then called Northern Illinois State Teachers College, in students, faculty and buildings.

At the beginning of his term, Holmes was president of 1,500 students, 122 faculty and six buildings, according to a August 1974 editorial from the Northern Star.

When he left office in 1967, the university had increased to 18,000 students, 1,026 faculty, 38 buildings and had opened the Loredo Taft campus in Oregon, Illinois. A decade earlier, the Northern Illinois State Teachers College was given its current name after receiving recognition from the General Assembly as a liberal arts university.

Among these 32 buildings made during Holmes’ term were Swen Parson Hall, which currently houses NIU’s law school, and the University Center, now called the Holmes Student Center.

Opened in 1962, the University Center was called a “hearthstone” by Holmes who believed it to be a place for the unification of students. The University Center housed elements that survive to this day including the first campus bookstore, auditoriums, bowling and pool tables.

After retiring in 1967, Holmes became a visiting professor of geology at Arizona State University, according to a eulogy written by NIU education professor Martin Bartels. During his retirement, the University Center was upgraded with a west wing and a 16 story tower in 1968 making the Holmes Student Center the tallest building in DeKalb County.

In 1974, Holmes returned to NIU one last time for the rededication of the University Center, which was renamed the Holmes Student Center. An oak tree was dedicated outside of the center on June 22, 1975.

That same year, on Aug. 21 in Tempe, Arizona, Holmes died at the age of 71. He was buried in his hometown of Freeport, Illinois, according to the August 1974 editorial from the Northern Star.

Holmes was part of the “greatest generation” and was witness to both World Wars, the Great Depression, the Cold War and its “Red Scare,” The Civil Rights Movement and the Vietnam War which gave birth to a hippie counterculture.

During his term, Holmes made the template for what NIU is today with a large student population, many buildings and turned a school for future educators into a liberal arts university with schools ranging from engineering to theatre and dance.

Holmes is not just immortalized in an oak tree and the Holmes Student Center, his legacy lives in the size of NIU, its students and its opportunities.