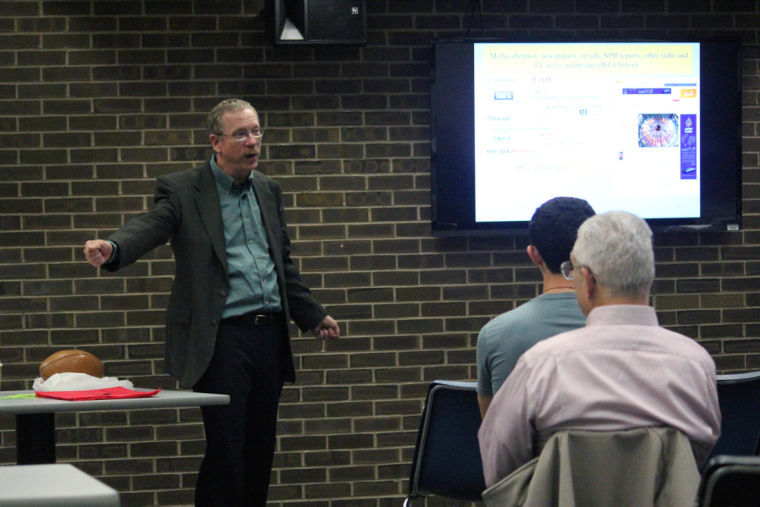 Professor David Hedin explained qualities of the universe and the possibility of multiple universes at an event Tuesday.

The speech was part of the annual programming for the Friends of NIU Libraries. Hedin, a Board of Trustees professor of experimental particle physics, explained the nature of matter, particles and the scientific advancements he has helped make in those subjects. The talk was called Understanding Our Asymmetric Universe.

Hedin worked at Fermilab for a number of years where he, along with a group of scientists, discovered a quark in 1995. Fermilab is an Illinois research facility where scientists experiment with high-energy physics.

Hedin said the quark was originally named the “Truth Quark,” but after discussion in the scientific community determined the name was too cute, it was named the “Top Quark.”

“The most enjoyable part for me was the explanation of the possibility of multiple universes, which is a science fictional concept I am familiar with through things like television and books, but I have not really heard a lot of physicists talking about it in public events, so it’s nice to hear an actual scientist discuss this,” said Lynne Thomas, faculty liaison of the Friends of NIU Libraries.

In his speech, Hedin explained the theory of multiple universes through snowflakes. He said all snowflakes form in the same process, but every snowflake is unique because even though they are made up of the same materials, the way they form and the conditions they form in differ.

“The universe is constantly expanding, and so are other universes. They are expanding into nothingness, which is what divides the universes,” said Hedin, who said this is only a theory and he does not and cannot know for sure about the existence of multiple universes.

The Friends of NIU Libraries puts on between two and four speeches per semester that are open to the public.