Pass/Fail: Standing up to the NSA & pointless protest at the Shedd 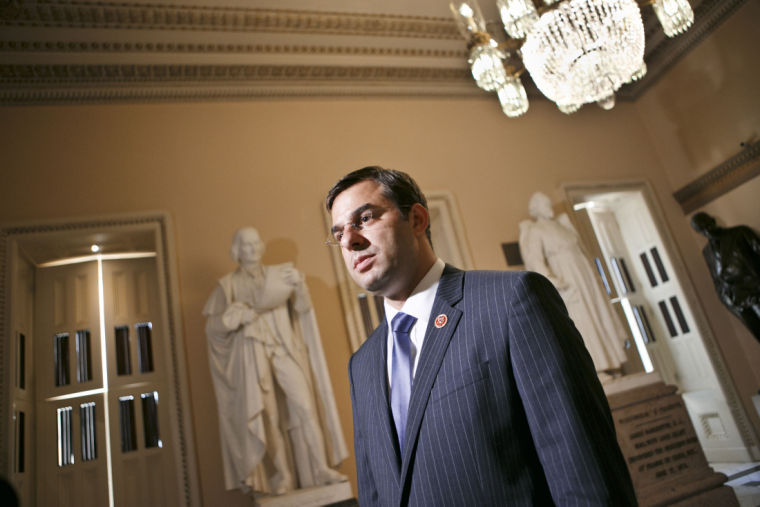 Rep. Justin Amash, R-Mich., comments about the vote on the defense spending bill and his failed amendment that would have cut funding to the National Security Agency's program that collects the phone records of U.S. citizens and residents, at the Capitol, July 24, 2013. The Amash Amendment narrowly lost, 217-205. The White House and congressional backers of the NSA's electronic surveillance program lobbied against ending the massive collection of phone records from millions of Americans saying it would put the nation at risk from another terrorist attack.

The House of Representatives voted down an amendment July 23 that would significantly reduce the data-collection powers of the National Security Agency.

Typically, I would say our government failing to view the people’s rights as a priority yet again would be a massive fail. But this time, it’s actually a disguised victory for the rights activists.

The representatives posted a final tally of 217-205 in favor of the $512.5 billion appropriations bill, nulling the amendment Michigan Representative Justin Amash had offered to the House.

Had only seven of those “yes” votes been “no,” the leaders of the anti-NSA movement would have had a solid foot in the door.

But, the reason NSA opponents actually won is the amendment, co-sponsored by both Democrats and Republicans alike, finally began one of the first national conversations about privacy rights since the Patriot Act was passed.

It was even a tense enough situation for the White House to issue an emergency statement urging representatives to avoid jumping on the privacy-rights bandwagon.

Both parties were split in the vote, with Democrats and Republicans joining hands to fight against the massive meta-data collection.

That means this issue is transcending party-politics, which is exactly what we need to eventually defeat the NSA raking in every American’s phone records.

From here, it’s hard to say what’s next. It will take more than simply another proposal or amendment to persuade the rest of Congress to get on board with curtailing the astonishing mass data sweep.

But one thing is certain: The activists and politicians opposing the NSA are here for the long haul.

The “Empty the Tanks” campaign protested at the Shedd Aquarium Saturday, according to an article by the Chicago Tribune.

Protests occurred all over the U.S. and also in many other countries around the world. The group had hoped to spread awareness of the dangers of captivity for both animals and human trainers.

Being a vegetarian, I understand the sentiment of wanting to let animals live freely without being confined to enclosed spaces, and I don’t completely disagree with their position on the surface.

The problem is “emptying the tanks,” as this group is suggesting, is certainly not the right way to end animal captivity.

After all, chances are the dolphins and whales at the Shedd Aquarium are already so conditioned to their environment they wouldn’t be able to survive on their own if they were ever released back into the ocean.

And even on that note, what is the point of demanding the Shedd, or any aquatic zoo, release the animals they already have in their possession? Considering releasing them wouldn’t necessarily end well for the animals, unless there is proof the trainers are abusing the animals they work with, they have no reason to give them up.

When it comes to continuing the practice of animal keeping, it’s certainly up for debate.

Though there are cases of abuse in zoos and aquariums, they offer people great insight into their lives, and I doubt every zoo and aquarium engages in cruel behavior. With the knowledge people can gain from witnessing animals interact with each other and their surroundings in a simulated environment, there’s little reason to assume animals are always being harmed in captivity.

As for the harm to the trainers the group preaches, I think it’s safe to say those incidents aren’t common, and trainers are most likely aware of the risks associated with working with wild animals.