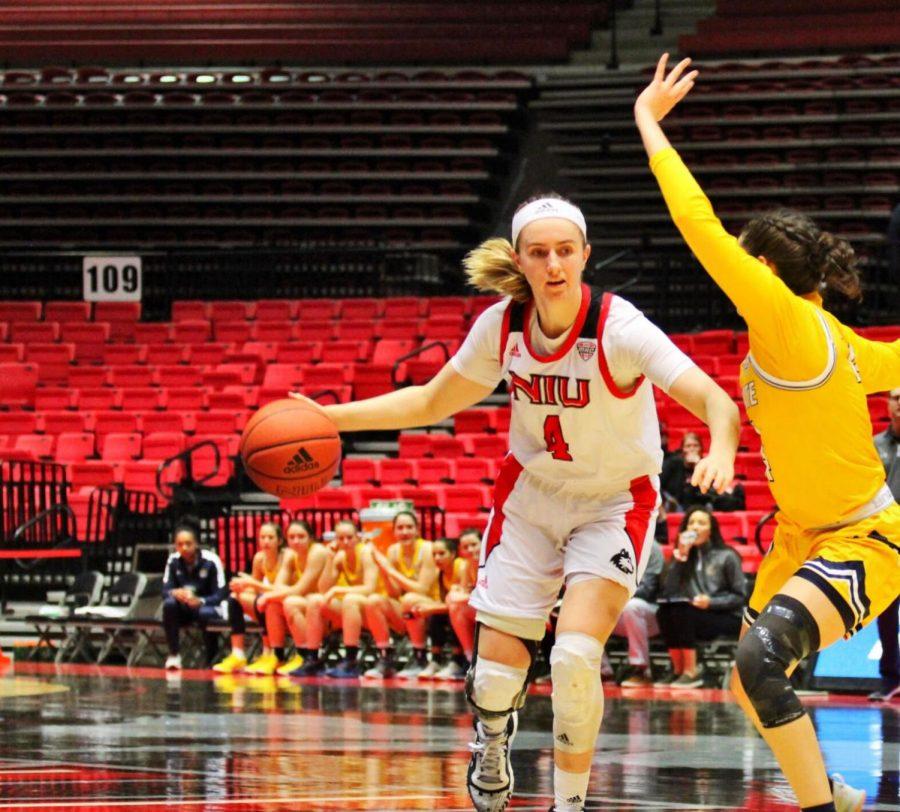 Woods was NIU’s top performer against the Zips, scoring 20 points and grabbing seven rebounds in 31 minutes of play.

“I think because of balance you see on the stat sheet, there were key possessions in the course of the ball game when were talking about it being a one or two possession game,” Carlsen said. “[Davis] hit big buckets, [junior forward Gabby Nikitinaite] hit some, [junior forward Riley Blackwell] and [sophomore forward Mikayla Brandon] did a really nice job for us in different possessions throughout the game that we will look back at say ‘that was a huge one for us,’ and it wasn’t just coming from a starter.”

“[Nikitinaite] had some great possessions for us when we needed her to step on the floor; it really started with her defense, being able to step in and get at it defensively,” Carlsen said. “That’s what got her comfortable on the floor and then within the flow with the offense and hit some shots.”

NIU’s defense was also a key factor in the win, forcing the Zips into 14 turnovers, which NIU turned into nine points on offense. The Huskies’ defense only allowed Akron to shoot 37.5% in the fourth quarter.

“The one thing I think the players understand is you can control things a lot easier on the defensive end by just the effort they put out; when you’re struggling to score, shoot the ball well or turning the ball over,” Carlsen said. “You can rely on your defense at times, and it can give you a little bit of a resolve.”

NIU got off to a great start in the first quarter, scoring 17 points and knocking down 50% of its shots. Akron did not fare as well, as the Zips made only 31.3% of their shot attempts and had seven turnovers.

NIU took a 17-11 lead after the first quarter, led by Woods and Davis who scored seven points each. Akron’s top performer in the first quarter was senior guard Shaunay Edmonds with four points.

Akron bounced back in the second quarter as it outscored NIU 6-2 in the first three minutes of the quarter. The Zips took their first lead of the game on a 3-pointer by sophomore guard Kendall Miller with a little over six minutes remaining in the quarter.

NIU retook the lead late in the second quarter 26-25 after a field goal by Starks with a little over two minutes left in the quarter. The Huskies took a 29-27 lead into halftime led by Woods with six points, while Akron’s top performer for the second quarter was Miller with seven points.

Akron’s offense was red hot in the third quarter as it knocked down 60% of its shots and outscored NIU 21-15 in the quarter. While the Zips thrived, NIU’s offense struggled, only knocking down 37.5% of its shots.

The Zips took a 48-44 lead after the third quarter, led by Edmonds and junior forward Jordyn Dawson with six points each. NIU’s top performer in the quarter was Woods with six points and two rebounds.

The intensity level picked up in the fourth quarter as neither team led by more than six points. NIU retook the lead after a 3-pointer by Nikitinaite with 7:30 to go in the quarter.

Nikitinaite extended the Huskies’ lead to 61-55 after a 3-pointer with a little over four minutes left to go in the quarter. Akron would cut the deficit to 66-65 with under two minutes to go, but NIU was able to hang on and win 70-65.

NIU was led by Nikitinaite with eight points in the fourth quarter, while Akron’s top performer was senior forward Haliegh Reinoehl with nine points.

NIU’s next game will be 6 p.m Wednesday against the University of Ohio Bobcats at the Convocation Center. That game can be seen on ESPN+ as NIU looks to pick up their second win in MAC play.