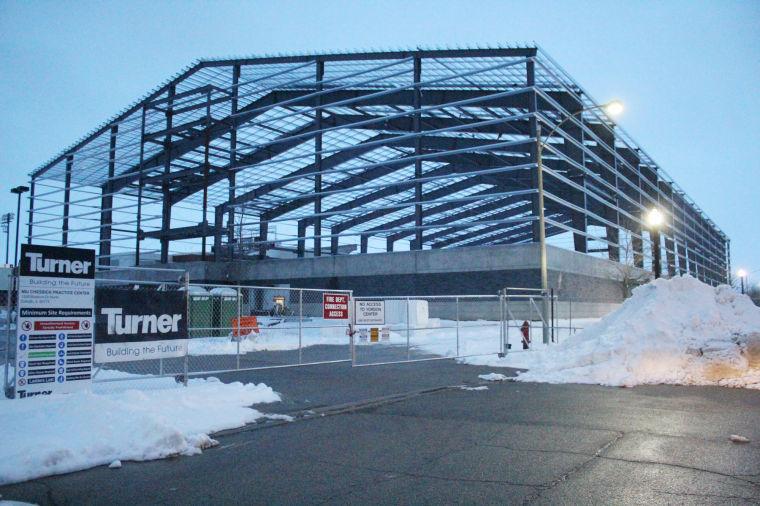 The Kenneth and Ellen Chessick Practice Center as of 2/27/13.

NIU officials are already looking forward to using the Kenneth and Ellen Chessick Practice Center, though construction is not scheduled to wrap up until fall 2013.

The Chessick Practice Center will serve as an indoor practice location for athletes on any of NIU’s 17 intercollegiate teams.

Mark Muhlhauser, associate athletics director, said he anticipates the facility will be open for 16 to 17 hours a day, if not more.

Turner said the facility will be beneficial to all athletes, especially those who have to practice in the winter and experience difficulty finding indoor practice space that fits their team’s schedule.

“We have several sports getting ready for their spring season now that have to use facilities around town or the Rec,” she said. “Once it’s done, this will be 120 full yards where they can do lots of things they’re unable to do right now.”

Muhlhauser said that although the facility will most likely not be open until after the football season starts, the indoor practice space will be beneficial to all teams when the weather gets bad.

“It gets our teams out of the elements and allows them to practice,” he said. “If we have a lightning storm, we can’t practice, so if we have an indoor facility, you know we won’t have to delay practice. Right now, if we have a lightning storm, the team just has to hang out in the locker room until the all-clear comes through, which happens a lot. If we have practice space in a controlled facility, it will be beneficial.”

Head football coach Rod Carey said the thing he is most looking forward to is being able to practice on a high-quality field no matter what the weather is like that day.

“It’s not a matter of not being able to practice for us; it’s a matter of having to go over to the DeKalb Rec, and that field is two soccer fields. It’s not big enough for us to practice on,” he said. “The surface is good, but it’s not great, so we’re affected when we have to modify our practices.”

According to Muhlhauser, the Chessick Center will feature a 120-yard regulation football field, a running track, pole vaulting and long jumping pits, netting for golfers to practice and batting cages. On the west side of the facility there is also going to be storage space for every sport’s equipment.

Carey said he looks forward to having the full 120-yard field and hopes it attracts new students.