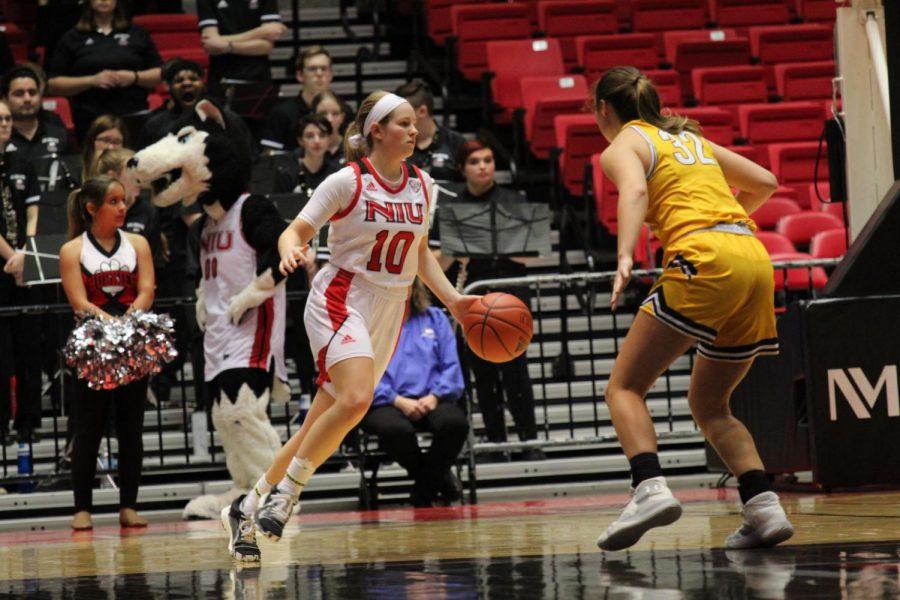 NIU had major issues with ball control in the game, turning the ball over 24 times. Those turnovers turned out to be the determining factor of the game, as Kent State scored 33 of its points off of them.

“I’m sure we will look at the stat sheet and understand any time you turn the ball over 24 times you just put your team in a tough position, especially from behind,” Head Coach Lisa Carlsen said. “I will say that I love the fight and resilience that we showed down the stretch, really giving ourselves a chance when it didn’t seem we would have a chance.”

“Anytime you give [a first-year] significant minutes, I think it’s going to bode well for their development,” Carlsen said. “I thought [Davis] handled it well, I think what we have seen from her, and what we definitely saw tonight, was what she’s going to bring to the table. She’s definitely a presence around the basket, and I think her teammates trust her to give her the ball around the basket.”

Kent State got out to a quick start in the first quarter, outscoring NIU 12-4 through the first three minutes. NIU was able to lower the deficit to 18-15 after a field goal by senior forward Abby Wollacott with 3 minutes and 7 seconds left in the quarter.

NIU’s momentum carried over to the second quarter as the team took a brief 24-22 lead following a 7-0 scoring run.

The Huskies’ lead did not last long as the Golden Flashes took back the lead 29-27 with roughly 4 minutes left in the quarter.

Kent State extended its lead to 42-31 at the end of the second quarter, holding NIU scoreless in the last 2 minutes. The Golden Flashes were led by sophomore guard Hannah Young and first-year guard Asiah Dingle with five points each during the quarter.

Both teams came out red hot to start the second half, as they combined to shoot 75% from the field and score 30 points in the first 5 minutes. NIU’s offense started to falter late in the quarter, allowing Kent State to score nine points on six turnovers.

Kent State took a 64-50 lead after the third quarter, led by Dingle with eight points, while NIU’s top performer was Woods with 10 points in the quarter.

NIU’s defense picked up in the fourth quarter, only allowing Kent State to shoot 25% from the field and forcing 7 turnovers in the quarter. The Huskies cut the deficit to 75-71 after a 3-pointer from first-year guard Chelby Koker.

That was not enough for the Huskies, as Kent State went on to win 79-71, led by Young with seven points in the quarter. NIU’s top performer of  the fourth quarter was Koker who scored eight points and one assist.

“I was just thinking about shooting when I’m open, and it happened to go in,” Koker said. “I was feeling it.”

NIU’s next game will be 3:30 p.m. Saturday against the University of Akron Zips at the Convocation Center.