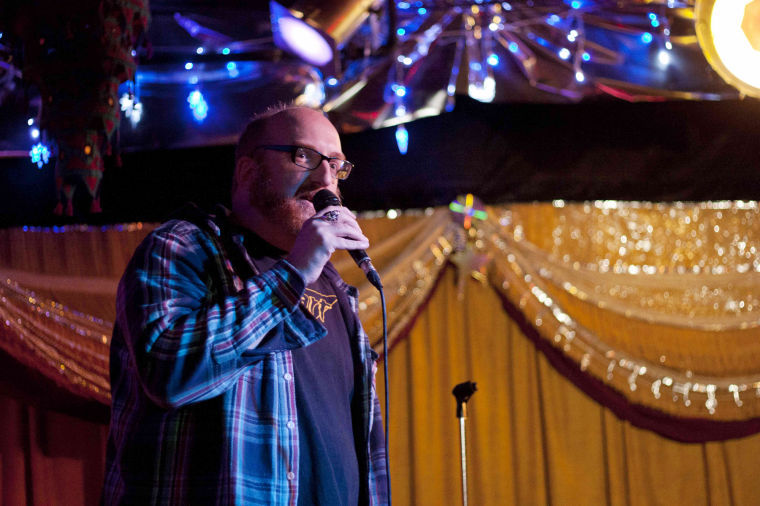 Comedian Brian Posehn performs his stand-up comedy act at the House Cafe on Friday night. His stand-up focused on personal anecedotes and his love for all things nerdy, particularly Star Wars.

This comedian won’t even touch religion and politics. Everything else, whether it is his own body or equating Star Wars with drugs, is fair game.

Otto’s, 118 E. Lincoln Highway, was the original venue of the show, but it could no longer host Posehn and opener Jeremy Essig due to power restrictions, said Alex Beach, production manager for Kickstand Productions, which arranged Posehn’s visit to DeKalb.

Posehn was brutally honest about himself in his act, whether his focus was on growing older or him sticking to his nerdy roots with constant references to Star Wars.

“It’s really about how old and gross I am,” Posehn said. “That’s really what the whole set is right now. It’s really self-deprecating.”

Some of those Star Wars references were derived from the most unlikely of places. Posehn told a comedic bit about smoking marijuana with a group of people after it was legalized in Oregon. A circle member asked him, “Have you ever smoked Yoda’s Brain?”

Posehn responded, “Smoke it, I will! Pass it, you shall!”

The audience laughed, and that bit in particular set the tone for his entire show.

Essig, like Posehn, comments on the oddities of his life–like being clueless about what to get his niece for her christening–in his stand-up act. He started doing shows with Posehn while he was going to school for journalism at the University of Missouri.

While taking up Posehn’s offer to do a show with him in Colorado, he became reacquainted with his love for stand-up.

“I was like, ‘This is amazing,’” Essig said. “Why would I want to walk away from this to argue with legislatures?”

Most members of the audience knew what they were getting themselves into. Some, like junior hospitality major Carrie Burt and doctorate English major Andrew Burt, had no idea.

“We were looking for something to do, more than anything,” Burt said. “I’ve seen [Posehn] in things, but I’ve never seen his stand-up.”

Posehn is well-known for his role in “The Sarah Silverman Program” on Comedy Central. He also performed alongside comedians Maria Bamford, Patton Oswalt and Zach Galifianakis.

Posehn’s material was easy to relate to throughout his act. He reiterated that complexity isn’t what he’s going for with his new material; his newest album’s title, “Fart & Wiener Jokes,” only supports the claim.

Regardless of subject matter, he regards his act as sort of high-brow and low-brow at the same time—-while he is talking about something as juvenile as farts, he says he also approaches it from a smart angle.

“I don’t tell fart jokes, I’m telling fart stories,” Posehn said. “I do see myself as sort of a fartist.”