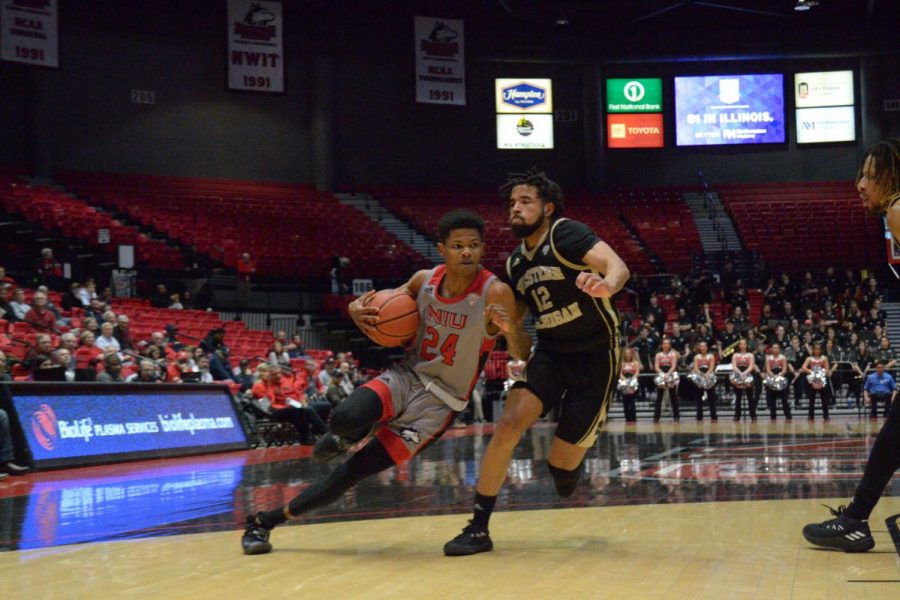 Then sophomore guard Darius Beane drives to the basket in a Jan. 25 game against Western Michigan University at the NIU Convocation Center. Beane scored 13 points in the last game against UIC.

“Typical MAC game,” Montgomery said. “Unbelievable defense [was] played on both ends — hard to score. I think we finally broke loose in the second half where we finally got some stops, got out in transition and then us getting the ball to the paint.”

The first half saw a lot of back and forth from the teams, as the lead changed four times. NIU’s largest lead was six points and came early in the half, while WMU’s largest was five, taking place not long before halftime.

The Broncos drew blood first with a 3-pointer from first-year guard B. Artis White. He finished the half with a game-high nine points. White was a problem on both sides of the floor against the Huskies, registering three assists and four steals by the end of the half.

The Huskies would answer with a 7-0 scoring run led by German.

German struggled in the first half despite a hot start early in the game. He scored six points after going 3-9 from the field. German went scoreless over the last 16 minutes of the half.

“He plays a huge role in scoring, but also distributing,” Hankerson said. “A lot of people don’t see that. He did a great job with distributing the ball tonight too as well, and it was there for us to just knock them down.”

NIU was kept afloat by Beane’s play, as he contributed six points on 50% shooting in the first half. He hit major buckets to bring the Huskies back from being down five toward the end of the half, including an emphatic put-back dunk, energizing his team and the arena.

The Huskies brought out a new focus on defense in the second half. After giving up seven 3-pointers in the first half, NIU allowed WMU one 3-pointer in the second, as the Broncos shot 1-11, resulting in an abysmal 9.1% from behind the arc. The Broncos finished the game shooting 32% from deep.

White was held scoreless in the second half on 0-3 shooting.

NIU took an early three-point lead in the second half behind a 3-pointer from German. German connected on another 3-pointer the next possession. He would go on to miss the rest of his shot attempts, finishing the game with a team-high 12 points.

After being tied at 41 with just under 11 minutes to go in the game, NIU went on a 9-2 scoring run over the next three minutes, distancing itself from WMU by more than two possessions for the first time in the game.

After the stretch, the Broncos never came within five points of the Huskies, thanks in part to the continued perimeter defensive aggression of the Huskies and first-year guard Tyler Cochran.

NIU’s game plan shifted in the final few minutes of the game as the team focused on running out the clock, waiting until the final seconds of the shot clock before shooting. While several of those shots missed, Cochran was there to grab the offensive rebound and give NIU a fresh 30-second clock on multiple occasions.

“I think it was a huge boost for my teammates while picking me up, telling me to keep going, keep attacking the glass,” Cochran said. “Even though I don’t score as much, or I’m not scoring, there’s always something you can do out there to contribute to the team.”

Cochran’s hustle on offense was frustrating for WMU as time was running out for a legitimate chance at a comeback. He finished with six points and rebounds, including three offensive boards.

“I thought [Cochran’s] energy off the bench, you know his six rebounds, six points sparked us,” Montgomery said.

The Huskies will return to the hardwood 7 p.m. Tuesday when they will host the Ohio University Bobcats at the midway point of their three-game homestand. The game will be televised on ESPN3.