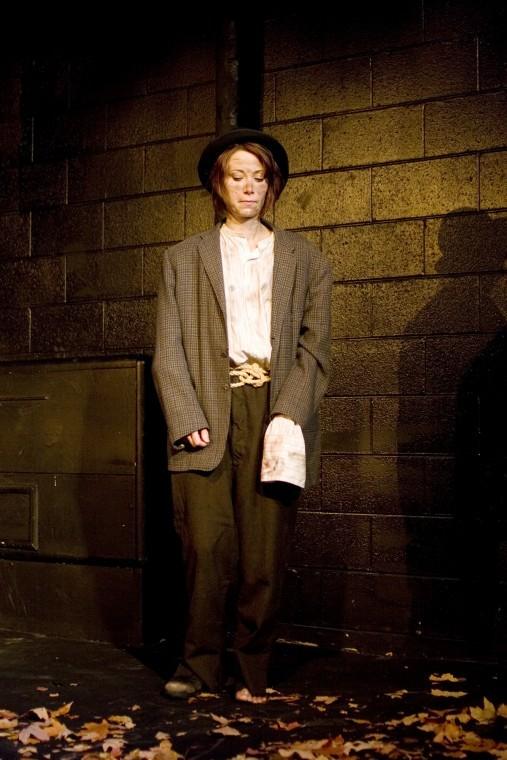 Graduate student Christie Maturo practices her role as Estragon in a dressed rehearsal of the production Waiting for Godot by Samuel Beckett. The play will run in the Corner Theatre Wednesday through Friday at 7:30pm with two performances on Saturday one at 2:00pm, and a second at 7:30pm. The final performance will be held on Sunday at 2:00pm.

The NIU School of Theatre and Dance will present Samuel Beckett’s classic play Waiting for Godot at 7:30 p.m. today through Saturday and 2 p.m. Sunday in the Stevens Building’s Corner Theatre.

Beckett’s famous play about nothing tells the story of two men, Vladimir and Estragon, who spend their days awaiting the arrival of a man called Godot. However, it appears Godot will not come. The result is a tedious, monotonous passage of time which makes the two men struggle to remember where they are and why they are there. Renowned for its existentialist themes and rather bleak tone, Waiting for Godot is a thought-provoking piece of tragicomedy.

Actors Nick Ferrucci and Christie Maturo mostly hit all the right marks as Vladimir (Didi) and Estragon (Gogo). Godot is a difficult play to perform, given that Didi and Gogo are constantly on stage—and with a runtime of approximately two hours and 20 minutes, that is a lot of spotlight to handle.

The casting of Maturo as Gogo seems puzzling, as the play is almost always cast with two males in the lead parts. One wonders what dynamic director Patricia Skarbinski aims to convey by presenting a male-female duo to the audience in lieu of the traditional male-male. The perceived result is a Gogo who is not just unhappy with life in general but also with her chosen partner. When she yells, “I’m unhappy!” and Didi responds with “Since when?” it seems as though Gogo is claiming she is dissatisfied with their relationship. In turn, Didi appears to be constantly persuading her to stay.

However, Skarbinksi simply may have cast Maturo due to her remarkable chemistry with Ferrucci. Their onstage physicality, which at times borders on slapstick, is impressively timed and executed. Their synchronized movements never appear forced—the audience is reminded of a fluid dance more than scripted stage directions. Their facial expressions are perhaps a bit less natural, but both actors’ talent for facial exaggeration will serve them well in the larger theater realm.

Didi and Gogo do not spend all of their stage time alone. As Pozzo, actor Dan O’Reilly amps up the volume and absurdity of the play. Self-important and swaggering, Pozzo crosses paths with Didi and Gogo while on his way to an unspecified destination. Traditional stage directions call for Pozzo to be a bit over the top, but O’Reilly takes it even further. His acting itself is admirable, but the theater space is so small and his voice so loud that it is almost a relief when Didi and Gogo are on stage alone again.

Volume is the lone snag in this production. The play reads as mostly quiet and bleak, with bursts of bravado whenever Pozzo is on stage. But this production spends the entire time on a vocal roller coaster, with voices rising and falling almost constantly. It is hard to truly understand the significance of the characters’ unhappiness when lines are continuously shouted.

One scene which falls victim to vocal gymnastics is Lucky’s (Hunter McHugh) “thinking” monologue. Written as a single-sentence stream of consciousness, the scene is instead delivered as a crazed rant. Perhaps McHugh wants to make the most of his only lines—in that case, he is more than effective.

The minimal stage decorations and lighting, coupled with the absence of any sort of music or sound effects, does a great job at conveying the desolate and somber tone of Waiting for Godot. The unchanging setting evokes sympathy for the characters, and when Godot sends a boy (John Reichenbach) to tell Didi and Gogo they must wait another day for his arrival, the audience will understand their misery and disappointment.

All in all, small snags aside, the team of students presenting Waiting for Godot do a bang-up job with such a complicated play.