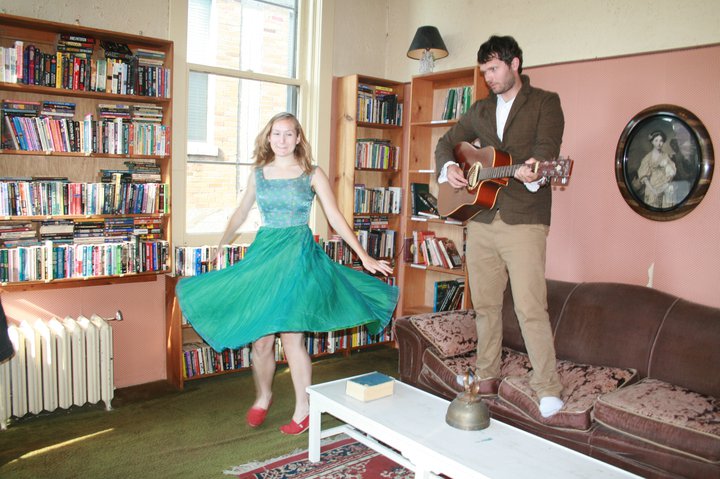 Then stop by the House Cafe, 263 E. Lincoln Highway, on Sunday and introduce yourself to Illinois band Coed Pageant.

Hailing from Urbana, the band consists of husband and wife team Bradley and Gretchen Bergstrand. Formed in early 2012, Coed Pageant has spent the year writing and recording an EP for every season. So far, they’ve released Winter Blitz, Rumspringa and Sundry Summer—collectively known as the Seasons EPs. Hard at work on their fall album (from their very own living room-turned-studio), Coed Pageant took time out to answer a few questions for DeKalb Scene.

Northern Star: How did you decide to form this side project?

Bradley Bergstrand: We were in another band together called The Palace Flophouse, but the two of us were writing a lot more songs than the band had time or space to use. So we needed another place to use them. We started recording without really knowing whether it was a separate project or not, but somewhere along the way it became clear that it was its own thing.

NS: Where did the idea for seasonal EPs come from?

Gretchen Bergstrand: We’d had numerous conversations where we’d discussed the idea that a song, album or even band sounds best in a particular season. One of these conversations led us to the idea of making our own album for a specific season, and why not an album for each season, and heck, why not do it all in one calendar year? The albums are inspired by their respective seasons, [and] are meant to bring you in to that season with how they feel and sound.

BB: It started out sort of like pairing wine with food. Some songs and seasons just bring out the best in each other.

NS: Do you have an actual favorite season?

GB: Fall. But without the other seasons, it wouldn’t be what it is.

BB: I would say fall is the best for music listening, but I love long, hot summer days.

NS: How would you describe your sound?

BB: I always tell people folk-rock, but I think we definitely have pop tendencies. We listen to a lot of indie rock, so that’s in there too.

GB: I don’t know if we’ve coined this phrase or not, but we’ve started calling ourselves “living room rock.” There are garage bands, there are arena bands and then there are living room bands.

NS: Making music with the one another is… (finish the sentence)

GB: I’ve been really into Regina Spektor’s newest album What We Saw from the Cheap Seats.

NS: Upsides of recording in your home? Downsides?

BB: We like to kind of write and record simultaneously, so it’s nice to be able to sit down and add something to a track whenever it comes to us. Also, we really like having total control of our recording. I’m sure in ways we could benefit from having someone there to run the board, but we are much freer to experiment when it’s just us in our living room.

GB: Downside is it’s hard to get away from your living room. The recording stuff is always there reminding you of work that needs to be done.

NS: Do you have any favorite memories from on the road, certain venues, bands you’ve played with?

GB: Anytime we tour is awesome. The fact that we can drive around the country together doing what we love without draining our bank account is really all we could ask for.

BB: This summer we played in an old high school swimming pool that had been turned into an apartment. That was pretty cool.

NS: What, ultimately, is your goal for your music?

BB: We would definitely love a bigger audience overall, but as long as we can keep writing and recording music we love, we will do our best to appreciate it for what it is. I guess the real goal is to create something uniquely us and sustain ourselves doing it.

NS: Have you been to DeKalb before?

GB: Oddly enough, I was at House Cafe a few years ago to see Mates of State.

BB: My older sister went to NIU so, yes, but it’s been a long, long time.

NS: What are you going to be for Halloween?

BB: Wayne and Garth! It would be perfect.