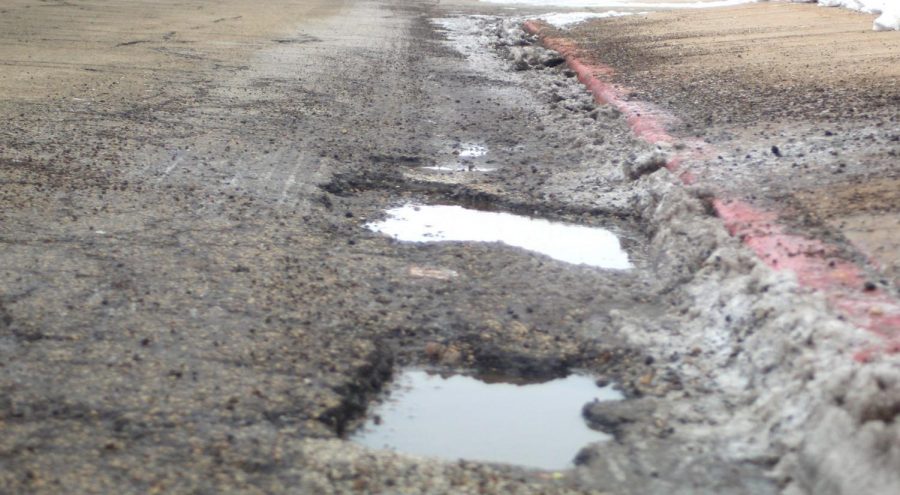 City Council members voted to impose a service tax on retailers in the Market Square Shopping Center to pay for annual infrastructure repairs, including the potholes near Walmart, 2300 Sycamore Road.

DeKALB — The City of DeKalb is working to improve roads by imposing a special service tax on the 18 retailers in the Market Square Shopping Center off of Sycamore Road to pay for annual repairs.

City Manager Bill Nicklas said potholes are back, and the city has no ownership or responsibility for the interior road work such as the main drive into the Market Square Shopping Center.

Before a tax can be imposed, a public hearing must be held, and retailers must be notified of their opportunity to be heard at the hearing. The public hearing is scheduled for the regular City Council meeting 6 p.m. Feb. 24.

In 1994, a reciprocal easement agreement was established among retailers to maintain roads around the shopping center, according to the Jan. 27 agenda.

“Last year, when the potholes were becoming gaping holes and started to eat up small vehicles and lots of tires, people were angry with the city, not knowing that we didn’t have the responsibility,” Nicklas said.

Nicklas said the city reached out to retailers in 2019 to address the problem but wasn’t met with support from them.

“I’m concerned, and I don’t think we’re getting anywhere with them out there, and it just looks shady out there, as someone told me, and I have to agree with them; it looks bad,” Tracy Smith said.

“When we have our constituents who call our aldermen and call the mayor and call the staff and say ‘when I drive to this particular shop and my car gets [hit] like that, what can we do?’” Smith said. “This is almost like a last resort; we don’t want to do it, but we may have to do it.”

A resolution to amend the Intergovernmental Agreement with NIU for the coordination of Integrated Transit Services to include advertising on HuskieLine buses was passed unanimously.

The resolution gives the city and NIU access to 25% of external advertising space on HuskieLine buses. The remaining 50% of advertising space would be available for commercial consumption and is managed by Geowayne Williams, the Student Government Association Director of Advertising, and City Transit Manager Marcus Cox.

Before the resolution was passed, the Intergovernmental Agreement didn’t include any policies concerning advertising on HuskieLine buses.

At a Jan. 13 City Council meeting, former owner Rosa Balli requested the city fund 50% of the project that would turn the second floor of the family’s two-story building into four apartments.

McAdams said he supports the project but would’ve preferred if the city were to fund 30% rather than 40%.

“I have decided that I’m going to support the project, but we, as a board, have a fiduciary responsibility to make sure those TIF funds are spread wide, and then everyone has an opportunity,” McAdams said.

A resolution and development agreement for consideration will be brought back for a vote at the Feb. 10 City Council meeting.