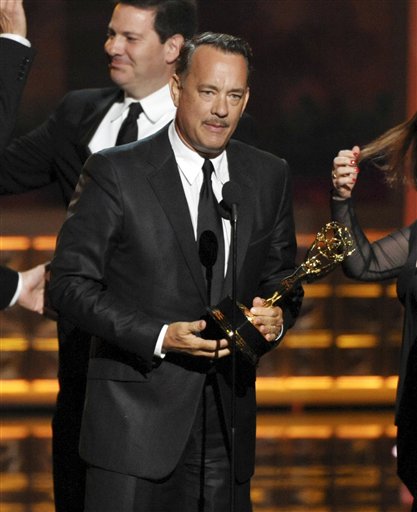 Tom Hanks accepts the award for outstanding miniseries or movie for 'Game Change' at the 64th Primetime Emmy Awards at the Nokia Theatre on Sunday in Los Angeles.

The 2012 Primetime Emmy Awards Ceremony was full of surprises and disappointments Sunday.

Frontrunner Amy Poehler (Parks and Recreation) lost Best Actress in a Comedy Series to Julia Louis-Dreyfus for Veep. In a surprising triumph, Jon Cryer (Two and a Half Men) beat out Louis C.K. (Louie) and Larry David (Curb Your Enthusiasm) for Best Actor in a Comedy Series.

HBO’s Game Change, which swept the Miniseries and Movie categories, with Julianne Moore winning a Best Actress in a Miniseries or Movie for her dead-on portrayal of Vice President hopeful Sarah Palin.

Host Jimmy Kimmel kept onstage banter funny and mocking, while acceptance speeches were laced with semi-fake humility and appreciation for fellow actors. All in all, it was an enjoyable and predictable evening in Tinseltown.