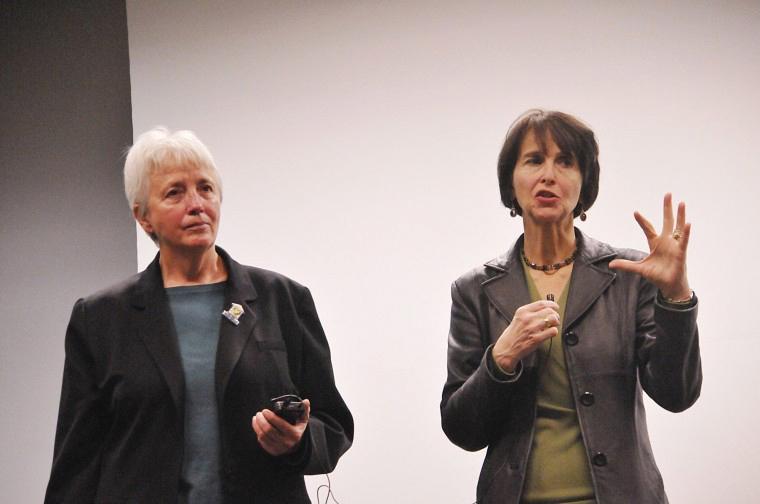 Dr. Laura Vasquez (right), professor of communications, and Diane Nilan, (left) founder and president of Hear Us Inc, answer questions in Wirtz Hall on Saturday night after the showing of their documentary "on the edge." The film focused on eight women from all over the country and their struggle with homelessness.

Laura Vazquez will soon be back behind the camera.

The associate professor in communications plans for her next production to be led by her Communications 496 Special Topics class. Two years ago, she finished a documentary on women trying to escape poverty; the film was called On the Edge.

Earlier this semester, Vazquez was notified NIU would be receiving a $200,000 grant from the Wyncote Foundation of Philadelphia. This project is a shared collaboration among universities in New Jersey, Colorado, Massachusetts and California.

The Wyncote Foundation of Philadelphia was founded in 2009 and is a charitable foundation that focuses on media and journalism. It has teamed up with the Clery Center for Security on Campus to produce Vazquez’s upcoming documentary about sexual assault on college campuses.

Before Vazquez found out about the grant, she was approached by a women’s rights group on campus about sexual assault. Soon after, Vazquez and some colleges produced two short films to be shown to NIU faculty and students. These films focus on sexual assault prevention tactics for men, women and bystanders.

“I believe you make a better film with solid research,” Vazquez said.

“I don’t want to turn this into a gender war,” Vazquez said. “[Sexual assault] happens on both sides. This is about awareness and prevention.”

By November, the students will start the pre-production process. In that time, Vazquez’s next documentary’s official website and Facebook page will be up. Then, in spring semester, filming will begin. Vazquez expects the film to be finished by August 2013.

“My goal is to make my students into activist filmmakers, so they believe in what they make and can defend it,” said Vazquez.