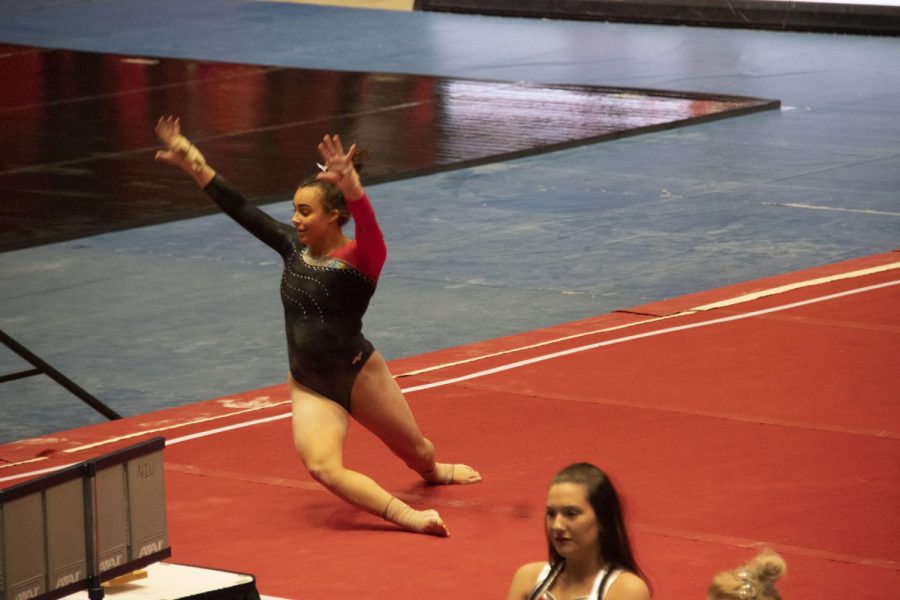 Junior Morgan Hooper performs her floor routine Friday during NIU's loss to Western Michigan at the Beauty and the Beast event at the Convocation Center.

DeKALB — Small mistakes broke the Huskies at the Beauty and the Beast meet Friday. The Western Michigan University Broncos won the meet with a score of 193.900, while NIU trailed close behind  at192.775.

“We’re having trouble transitioning from what we do in practice, what we do in warmup and then just performing it,” Head Coach Sam Morreale said. “Truth be told, I’m frustrated. I’m disappointed in our result, but not in the kids. They’re doing everything I’m asking them; they’re busting their butt every day, and they’re doing what the plan is.”

The Huskies began the meet on vault with all gymnasts scoring a 9.200 or above. Sophomore gymnast Tara Kofmehl tied for first with Broncos first-year Amanda Gruber, junior Morgan Spence and junior Stacie Harrison, all with scores of 9.750.

The Huskies struggled on bars, with many gymnasts fighting to maintain control of their movements. Junior Morgan Hooper placed first with a score of 9.825, just under her personal best of 9.900 made on March 9 last season at the State Championships. Kofmehl scored an 8.325; her personal record of 9.700 was made at last season’s Central Michigan University meet on March 15.

NIU continued to trail close behind the Broncos after the second rotation, the Huskies with a score of 96.750 overall and WMU with a total of 96.975.

Junior Mia Lord scored a 9.850 on the balance beam, just under her personal best of 9.900 which she scored at the March 23 MAC Championships. Lord tied for first alongside WMU senior Amelia Mohler. Senior Allison Richardson posted a 9.775 on beam, placing third.

On floor, Kofmehl placed first with a score of 9.875 while Hooper placed second with 9.850, beating her old personal record of 8.550 made last season at the January 18th 2019 meet against Western Michigan.

In all four events, Sears placed first with an overall score of 38.775. Morreale said he’s proud of Sears and the talent she’s shown as an underclassman.

“She’s just a really good kid,” Morreale said. “She trains really hard. She’s having no issues with competing as a college-level athlete as a [first-year]. She looks calm, cool and collected. I’m nothing but proud of her, and that’s something we saw in her during the recruiting process, and it’s nice to see her stepping up and getting that done.”

Although the Huskies struggled, Morreale said he’s optimistic about what the future holds for the team.

“I’m not worried,” Morreale said. “I feel like we’re going to be fine as we move forward. Each meet we’re [going to]  get a little better; we learned stuff about ourselves tonight. We had a lot of really good stuff tonight, and that’s the hard part, you lose sight of some of that stuff [when you lose a meet].”

The Huskies’ season continues 7 p.m. Friday when they take on the Illinois State University Redbirds in Normal.