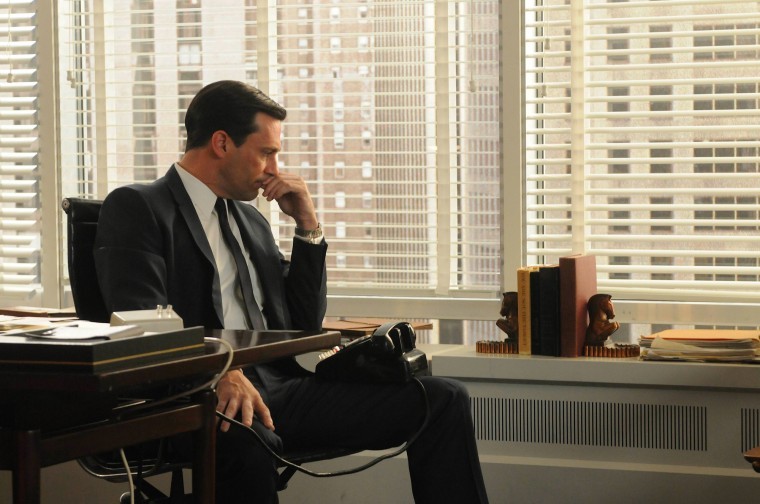 Cheesy as it is, the line rings true for most everyone in our despondent times. So if we all are in need of a hero, why the hell are we watching Mad Men, a show in which every character is a complete mess?

There are many wonderful things about Mad Men: Elizabeth Moss’ impeccable acting skills, Christina Hendricks’ gorgeous figure (and, subsequently, the positive self-image it promotes), the excruciatingly detailed set design and writing and Jon Hamm’s jawline. We tune in to revel in the elegance of the characters and their little world, and to laugh at their dated and hopelessly un-P.C. worldviews. The fifth season of AMC’s monster-of-a-hit drama will light up television sets on Sunday, and with the premiere comes a big question: “Why? Why? Why this show?”

Honestly, it’s not all that hard of a question to answer. In fact, I can lay it out for you in one sentence: Mad Men is a hit because it shows its viewers… themselves.

Mad Men may be a show about the ’60s, but moreover it is a show about people of all milieus; lucky, beautiful people, sure, but real people with severe emotional complexes and a plethora of moral ambiguities. Under the gloss and glamour, the show’s draw is its blatant portrayal of the ugliness of the human condition.

But let’s really take a close look at Mad Men and all of its glory. The show’s protagonist, Don Draper, is a successful advertising director with killer wit and looks to match. At first glance, he exudes everything a man would want to be. However, once the façade lifts, we find Draper is a serial cheater with a screwed-up past and made-up identity who is barely holding it together on a daily basis. He fluctuates between self-loathing and supreme egotism, and he refuses to take responsibility for any of his flaws. Yet, Draper continues to rivet millions. Women swoon and men emulate. Ratings soar. This flagrantly bad person wins us over week after week.

Why? Because Don and the other Mad Men characters triumph big and fail even bigger, and that is what we do on a daily basis. We love them because we are them. We have the same aspirations and the same fears. We’d like to be rich, but like Roger Sterling, we don’t want to be useless. We’d like to impress people with our talents but, like Peggy Olson, we don’t want to be married to our career. Just like Betty Draper Francis, we want to be at peace with our lives. We’re feel for them as we feel for ourselves, and their struggles sometimes force us to examine the messiness of our own lives. Without doubt, Mad Men hands us the truth bombs that other hit shows simply lack.

I’m going to get a little personal on you all, readers. I need this show. Need. Like other 24 year olds, I constantly ask myself, “Who am I?” I feel pressure to know the answer already, to be evened-out and secure in my own morals and ideologies. It’s a nightmare, and I feel like an utter failure. But when I lose myself in the world of Mad Men, thing start to calm down. The characters may be fictional but their struggles are so raw, so exquisitely real, that I feel assured that no one in the real world could possibly ever have all the answers.

Now, I don’t mean to say that we all prefer the company of prostitutes like Don or are all dead inside like Betty. But are we not all complex? We ache, we shine, we run around searching for something to believe in. Mad Men gives us a window of time, even if it is an hour-long one, to ponder who we are and what we do, all the while knowing that we’re not alone in the pondering.