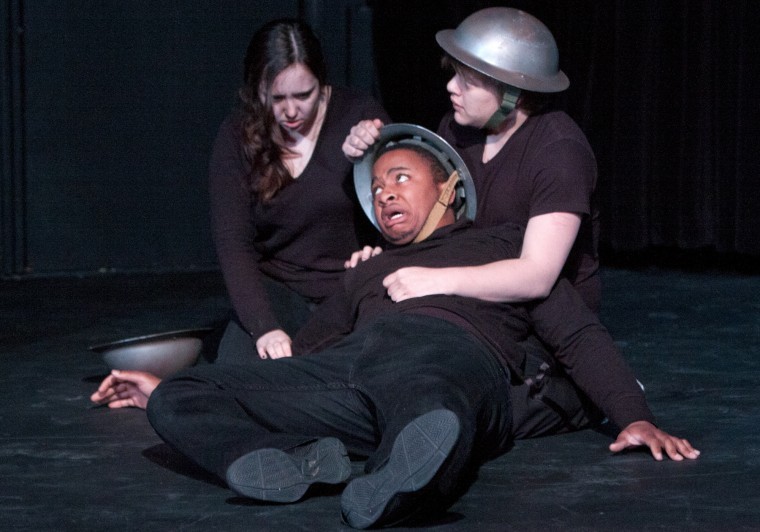 The King Is Dead.

And so is Banquo, so is Cawdor and so is everybody else. Why all of this death?

Because the NIU School of Theater and Dance’s production of Macbeth has hit the stage.

Long proclaimed as Shakespeare’s bloodiest, most brutal play, Macbeth is the tale of an ambitious couple and the mayhem they create. After a trio of witches declares that he will eventually become King of Britain, Macbeth and his wife embark on a series of dastardly deeds in order to secure the crown. The result is two and a half hours of regicide, ghostly apparitions, backstabbing and eventual insanity.

Lady Macbeth with impressively measured skill. She manages to avoid playing Lady Macbeth in the typical “completely bananas” style and lets her character’s love for her husband shine through her ambition. As for the rest of the cast, they tackle creepy dialogue and inventive staging with aplomb. Every actor clearly has a handle on the density of the play, and they carry the weight of each word in every scene.

It is always refreshing to experience a Shakespeare production that is relatively free of gimmicks. Director Alexander Gelman’s Macbeth takes place on a bare stage and the cast is garbed in simple black clothing. These choices allow the production to seem timeless as well as modern; even more so, the lack of adornment truly lets the power and gruesomeness of Shakespeare’s supposedly cursed play take center stage. From the Weird Sisters’ ghostly councils to Lady Macbeth’s “out, damned spot!” monologue, all attention is focused on Shakespeare’s masterful writing.

So if the grey skies and rainy evenings haven’t done enough to put you in a deliciously spooky mood, get yourself a ticket and transport yourself to the bloody world of Macbeth.

Macbeth opens Thursday and runs through February 19th, in the Corner Theatre of the Stevens Building.