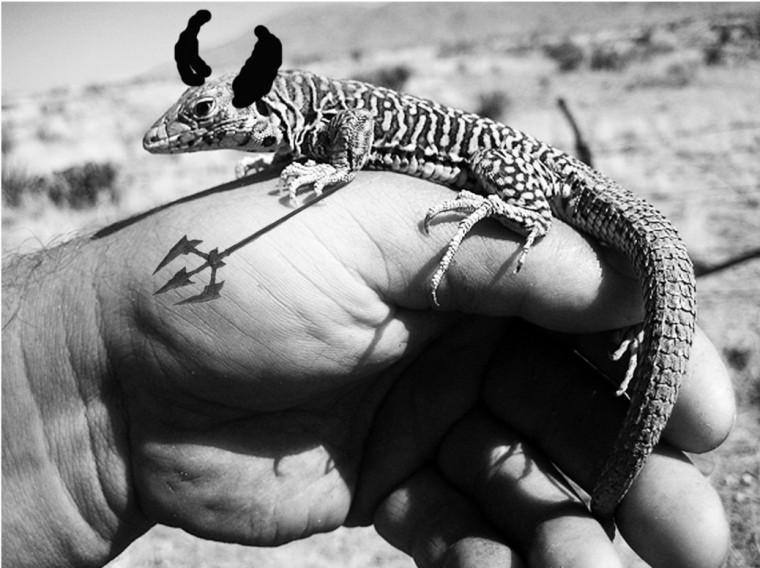 In this photo illustration, a checkered whiptail lizard is altered to look like a devil. Junior English major Lauren Nix used the photo as part of her zine, which went viral.

NIU was the birthplace of an Internet phenomenon, and it’s called “God Hates Checkered Whiptail Lizards.”

Featuring some great zingers like “It’s Adam and Eve, not Checkered Whiptail Lizards and Eve” and a bald eagle crying, the zine humorously parodies homophobic arguments, yet the object of hate is instead the checkered whiptail lizard species, a species which rather than the traditional male/female practice of reproduction, practices parthenogenesis.

Or as the zine puts it: “more like parthe-not-in-the-book-of-genesis, am I right?”

This zine is called LAMP, which stands for “Look At Me Please,” and is produced single-handedly by junior English major Lauren Nix.

While it’s not new – the first issue was published in January 2011, and there have only been three since then – LAMP normally doesn’t cover political issues.

But the idea for this current issue stemmed from a heated Facebook argument that one of Nix’s friends got into with a homophobic individual. Nix, a self described “ascended-level Internet argumenter” was coaching her friend on what to say, and in response to the argument that “homosexuality is unnatural”, went off to find a list of all the animal species that exhibit homosexuality in nature.

She stumbled across one species called the checkered whiptail lizards, thought the name was hilarious, and “God Hates Checkered Whiptail Lizards” was born.

Nix printed the usual 100 copies, distributed them around campus and thought that was it; some fellow NIU students would get a chuckle and maybe a bit of enlightenment.

But one of those students didn’t just chuckle, he or she decided to snap pictures of the zine and upload it to a popular website called Reddit, where he or she realized it would be a big hit.

From there, it spread wider and farther than a sinful whiptail lizard spreads its legs during mating season.

“Most of the time you don’t expect something you write to get any audience, let alone 2.3 million,” she said.

The zine even made it’s way to the website BoingBoing, which itself started as a zine and is now the most daily-read blog on the Internet.

Nix described seeing her work on BoingBoing as “the equivalent of a poet getting published in the New Yorker.”

While she does appreciate the publicity and attention her creation has gotten, she is also concerned some may not comprehend the message it is trying to get across.

“My biggest fear is that someone will think that I’m insulting religion itself,” she said. “But I was raised Catholic, and am not an anti-religious person.”

Nix said the purpose of “God Hates Checkered Whiptail Lizards” is to take the homophobic arguments out of context, so people will realize how illogical they are.

“It’s pretty easy to get the wrong idea about it though, as my inbox has shown,” Nix said.

Expect to see one or two more publications of LAMP, with one out hopefully before spring break.