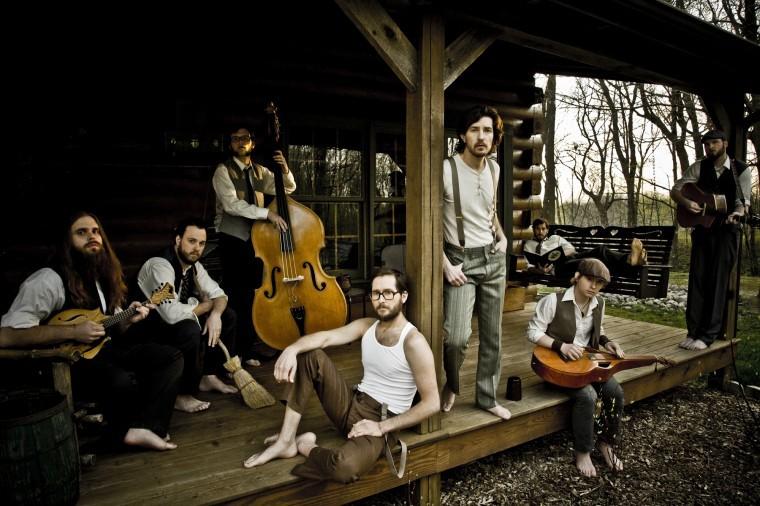 Looking for a way to add a little folk to your life? Then head on over to the House Cafe at 9 p.m. Thursday, when it will play host to The Giving Tree Band.

The Giving Tree Band hails from nearby Yorkville, and they’ve made quite a name for themselves. Founded by brothers Todd and Eric Fink, the band’s tale seems downright storybook – a close-knit, motley band of dedicated vegans living in a house that is mostly made from reclaimed/recycled material, making music and loving life on a 24-hour basis.

With the influx of punk and bands of the noisier persuasion that DeKalb has recently experienced, it’s refreshing to know that soon, the air will be alive with the sounds of fiddle and banjo. The Giving Tree Band sports a seven piece core of instruments that creates a sound it likes to call “progressive old-time.” Though their sounds smacks of our neighbors to the south, the Giving Tree guys still fully embody the spirit of the Midwest. Their latest album, The Joke, the Threat, and the Obvious, is full of sweet, soulful melodies that allow listeners to imagine rolling cornfields and endless blue skies.

“They are a different type of music from today’s ‘norm’,” said Allen Sillens, local fan and NIU alumnus. “It’s the kind of music you can enjoy on a peaceful walk or a long drive.”

Thursday night’s show will be the third time the band has graced a DeKalb stage this school year, but it should be said that they should probably come around more often. Their following here is loyal, and the Giving Tree Band picks up new fans every time they come through. “They’ve been playing shows with Cornmeal; and when I saw them open up for Cornmeal at Middlewest Fest it was the absolute highlight of the weekend,” says Courtney Simpson, senior family and social services major. “Having The Giving Tree Band at the House Cafe is the quintessential DeKalb experience, and it’s an absolute shame to miss out. I will be there each and every time they come.”

Aside from their killer musical stylings, part of the Giving Tree guys’ appeal is that they have a genuine interest in their fans. Every member is extra amiable, and so is their social networking presence. They try their hardest to answer every inquiry and comment; those who follow them on Facebook know that they often tout the talents of their friends and family, as well as invite fans to view snapshots of their daily lives.

It isn’t everyday that a band allows the passion they have for their music flow in abundance to the people who enjoy it.

2012, despite only being a mere two months in, has been a busy year for the Giving Tree Band. In January, the band played at the Chicago Bluegrass and Blues Festival, as well recorded lives sessions for both Daytrotter and Audiotree. In between those highlights has been an almost non-stop roster of local and Midwestern shows. And they don’t seem to ever want to slow down. Their upcoming shows include show in Ames, Iowa and St. Louis, MO, as well as a gig at Summercamp in May.

So if you need a dose of bluegrass bliss, look no further than the stage at the House Cafe. There will be a very large band of very sweet, very talented guys, and odds are that they’ll all be very happy to meet you.