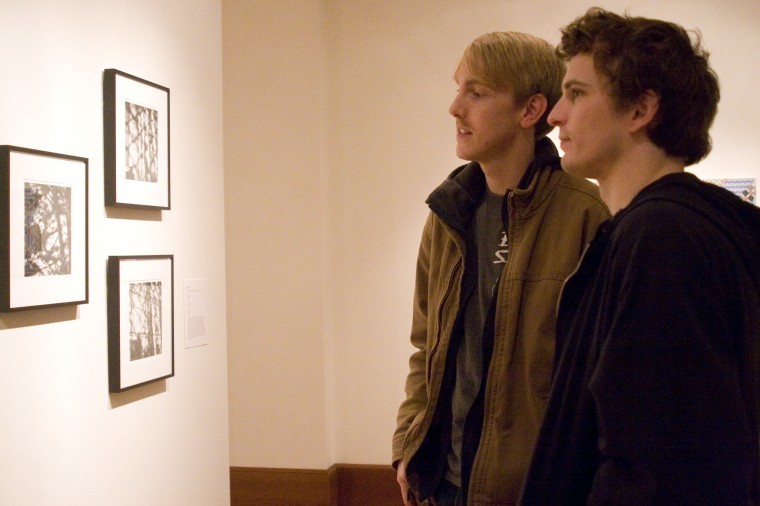 Painting graduate student Bogumil Bronkowski (left) and drawing graduate student David Willett view artwork in the School of Art Faculty Art Exhibit at the reception for the three early winter exhibitions. One exhibition, “The New Art Examiner,” is on display in the Hall Case Gallery in Altgeld Hall.

Chicago was the place to be for artists in the 1960s and ’70s due in large part to The New Art Examiner.

The independent magazine, founded by Derek Guthrie and his wife Jane Addams Allen, provided profiles and criticisms of the Chicago art scene from 1973 to 2002.

“The New Art Examiner, ‘Chicago’s Independent Voice of the Visual Arts,’ 1973-2002,” which opened Tuesday at the NIU Art Museum in Altgeld Hall, explores the history of the influential publication.

Barbara Jaffee, associate professor of art history and curator of the exhibit, said the exhibition was inspired by the Nov. 1 release of Northern Illinois Press’ the Essential New Art Examiner, an anthology of works from the magazine along with new essays by original editors.

“When I heard that the Northern Illinois University Press was in the process of publishing an anthology, I was really excited because, as a lifelong Chicagoan and someone who began her career as a visual artist, I was very familiar with The New Art Examiner,” she said. “I knew the magazine as an artist and how important it was.”

Jaffee said she knew the anthology would have historical essays and memoir-like introductions from editors of The New Art Examiner, but she thought an art exhibit would be a more effective way to explain the history of the publication. She wanted the history to be accessible to students.

The pieces on display are actual magazines from each decade of the publication’s run, some of which are addressed to Barbara Jaffee herself. Each era of the magazine displayed, accompanied by photographs, photo spreads, and selected articles from the publication.

While the magazine was an influential part of the Chicago art scene for almost three decades, a changing social climate and financial struggles forced The New Art Examiner to close its doors for good.

“I do know they were founded out of a kind of idealism of the mid-’60s,” Jaffee said. “It was able to thrive because there was a climate for it. When funding ended as part of the whole culture wars of the late 1980s, it was going to be difficult. Coming out of the Reagan era, there was this new idea that the arts should be based on a corporate model…Funding became extremely problematic for the magazine in this new era of the privatizing of the arts.”

While the influential art magazine no longer exists, today it lives in Altgeld Hall.

The NIU Art Museum is free and open to the public 10 a.m. to 5 p.m. Tuesday through Friday, noon to 4 p.m on Saturday and by appointment for group tours. “The New Art Examiner, ‘Chicago’s Independent Voice of the Visual Arts,’ 1973-2002” will be on display from November 29 to March 10, 2012. The exhibit will be closed from December 17 to January 9.