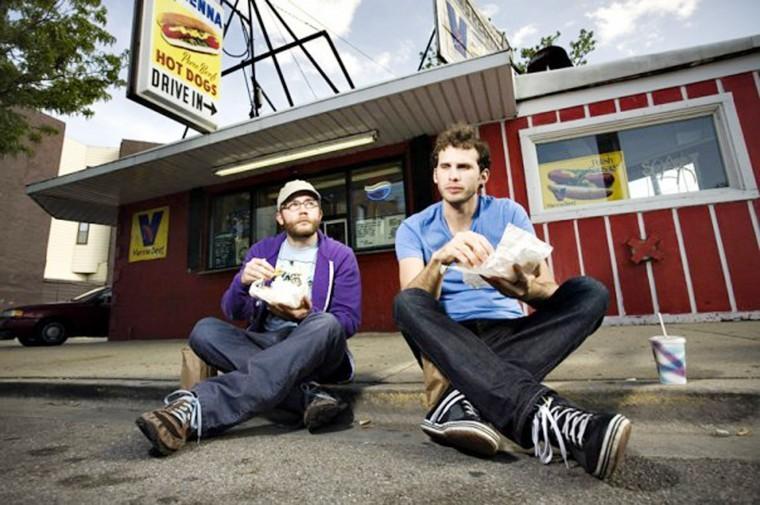 (From left) Steve Reidell, aka STV SLV, and Aaron Brink, aka ABX, make up The Hood Internet, the duo mashing-up 8 p.m. Thursday at the House Café, 263 E. Lincoln Highway.

Bringing a mix of hip hop and indie pop, The Hood Internet is a little something for everyone.

We’ve all been there: You want to listen to that sweet new Broken Social Scene track, but how are you going to get your hip-hop-minded friend to play it on his stereo? Simple, throw some R. Kelly over it. Some may balk; but, for The Hood Internet, it works out surprisingly well.

Mashups are like those weird food-condiment combos your friends tell you about. Sure, they seem odd and gross at first, but all of a sudden, you wonder why you never ate your french fries with mayo earlier. The Hood Internet’s mix of TLC’s “No Scrubs” and Led Zeppelin’s “All of My Love” is the musical equivalent of fries and mayonnaise.

To taste a sample of their work is easy. It’s all free. Their blog is updated frequently with links to their latest mix on the website Soundcloud.

“I think that’s definitely part of why people keep listening to the tracks we make,” said STV SLV, aka Steve Reidell of The Hood Internet.

The duo’s creative process is certainly productive, boasting over 180 songs spread throughout seven albums. A lot of trial and error goes into making a new mashup, Reidell explained.

“There are often notions of things that might fit well together, and from there it moves to application, which results in either success or further moves to trial and error,” he said, “The whole process really feels mathematical.”

Comparing The Hood Internet to that other famous mashup artist, Girl Talk, is inevitable. But the former duo isn’t nearly as ADHD. With Girl Talk there’s no flow; it’s just one sample after another, after another. The Hood take their time, not afraid to let the whole song play out. They let the tracks work with each other, not compete for attention.

Though not all of the tracks are musical genius. Some of them are tongue-in-cheek puns. Take for example “Rock Yo Sea Legs,” a mix of Crime Mob’s “Rock Yo Hips” and The Shins’ “Sea Legs.” A bit

On the other hand is “Billie ‘Wildcat’ Jean,” which replaces the repetitive bass line and synth from Michael Jackson’s “Billie Jean” with the melodic guitar riffs from Ratatat’s “Wildcat.” It’s subtle, and the two tracks fit so well together it’s like Michael Jackson was always missing a wildcat roar sample from his songs.