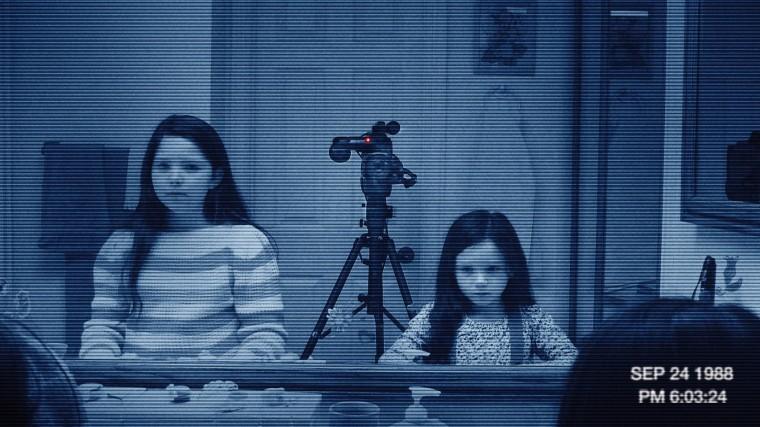 Chloe Csengery (left) plays young a young Katie Strider, the heroine of the Paranormal Activity trilogy. She and her younger sister Kristi Rey, played by Jessica Tyler Brown, film the unexplainable phenomenon which follows them in Paranormal Activity 3.  Released Friday, the film set a box office record, grossing over $54 million in its opening weekend.

Paranormal Activity 3 set a box office record for a horror film over the weekend, and I don’t really understand why.

You see, I saw the movie Friday night and was sorely disappointed. I’d gone into the theater giddy with excitement, flanked by two friends who were just as excited as I was. But when the lights went down, and the movie got to rolling, the excitement waned and was replaced by frustration. There were so many missteps, so many cheap gags and way too much bad CGI. I found myself snickering and throwing up my hands in frustration. Grab the kid and run, you fools! Watch the tapes! Call a priest! I know the movie is set in the ’80s; but, for the love of God, please stop teasing your hair!

Paranormal Activity 3 tries to bring the fright, but it just falls flat. The scare tactics closely resemble that of the original film but lack the subtle creativity that once made them so effective. The cast is much more likeable than previous films — who doesn’t love adorable little girls doing adorably creepy things? But as likeable as the family and their friends are, their behavior was just bizarre. Not one person seems to remember that a video camera captured EVERYTHING they just experienced. No one says, “Hey! This insane thing just happened to me, and it was scary! Please watch the video and try to understand!” I simply do not believe that people who experience honest-to-blog trauma would not rehash it to their moms/dads/employers/spouses until they couldn’t talk anymore. The lack of communication was honestly confusing. And — I hope I’m not giving anything away – the rather rushed explanation of witchcrafty trickery — “Oh, there used to be weird, demon-loving covens with memory erasing powers!” — was so out of place that I forgot about it until the end of the movie.

Now, Paranormal Activity 3 was not a terrible movie. I’m not saying I didn’t jump or gasp or hide my face behind my fingers. The film still managed to play a little into my fears of quiet disturbances and demonic presence. It’s just that I don’t enjoy going to movies and rolling my eyes. I want to believe in what I’m watching. I wanted so badly to ride the ride with the characters, to feel the genuine fear I felt when I first met grown-up Katie in Paranormal Activity and watched her fight and lose against an evil spirit.

My recent movie experience really made me think. I felt taken advantage of — my intelligence had been insulted. Perhaps my expectations were too high. I mean, the first Paranormal Activity had me rethinking trips to the bathroom and sleeping with a nightlight. But I don’t think that’s it. I think the problem stems from the changeover of the films from delightfully low-budget indie pieces to a mega-million production studio baby. The brains behind the recent additions to the Paranormal Activity franchise, Christopher Landon and Oren Peli, are so obviously in it for the money now. It’s working — Paranormal Activity 3 just pulled in over $54 million dollars its opening weekend. These writers don’t seem to care if there are glaring plot holes — Really? The friend or babysitter doesn’t think it’s weird that their former employers just disappear? —  or unrealistic behavior. And they aren’t going to care if we keep forking over money for their mediocrity.

Nice try, Paramount Pictures. But you and I? We’re in a fight now.