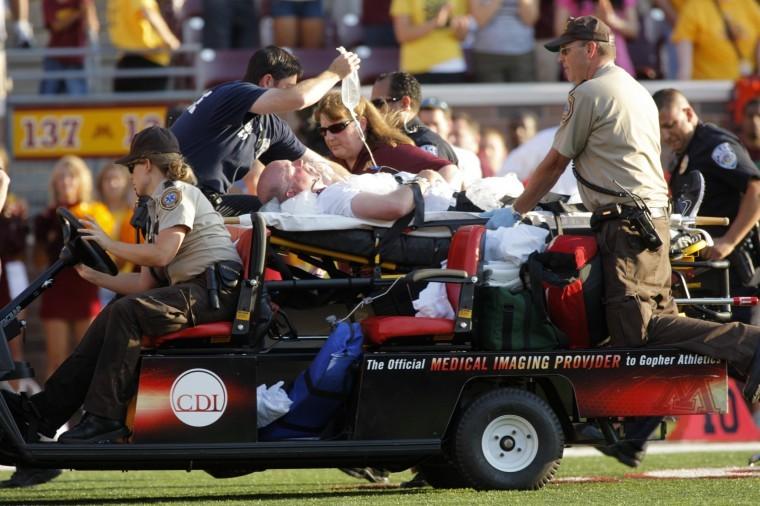 UPDATE: NIU Athletic Director Jeff Compher released the following statement on former NIU coach Jerry Kill after the coach collapsed on the field Saturday night due to a seizure. Kill is currently the head coach for the Minnesota Golden Gophers.

“Just before kickoff here in Lawrence, I heard about Coach Kill and what occurred late in the game in Minneapolis.  Certainly, our heartfelt thoughts and prayers go out to Coach Kill and his family. He has many friends here at NIU, and I know that our university, our athletic department and our fans join Golden Gophers, Salukis and many, many across the college football world in sending him our best wishes.”

MINNEAPOLIS | Minnesota head coach Jerry Kill is listed in stable condition at a local hospital after suffering a seizure late in the game against New Mexico State. It’s the third time in his coaching career that Kill has had a seizure on game day.

Kill was taken from TCF Bank Stadium by ambulance Saturday night after collapsing on the sidelines with 20 seconds to go in the game, a frightening scene that silenced the stadium and had players and coaches from both teams kneeling on the field in prayer.

“He was at no time under any risk in any way,” team doctor Pat Smith said.

Smith said the 88-degree temperature coupled with dehydration might have played a role in the seizure.

With the Gophers down 28-21 and trying for the tying touchdown, medical personnel suddenly surrounded Kill on the sideline. He was rolling around on the turf, with his arms and legs flapping back and forth at times as personnel tried to control him. Smith said the Gophers were fully aware of Kill’s history of seizures and gave the coach medication to sedate him.

After about 15 minutes, Kill was removed from the field on a stretcher, and the crowd clapped and chanted “Jerry! Jerry!” as he was rolled away. He was transported by ambulance to the hospital, with his wife and daughter by his side.

“His vital signs were absolutely normal, and he responded typical of someone that was recovering from a seizure,” Smith said.

With the outcome in the balance, quarterback MarQueis Gray was rushed and threw incomplete on the next down, and New Mexico State ran out the clock to secure the win.

By that time, all thoughts were with Kill.

Kill twice had seizures late in games while coaching at Southern Illinois, once in 2001 and again in 2005. He also collapsed and had a seizure while taping a television show in 2006. Each time, he was able to return to work without missing a game.

Kill has been taking medication to control the seizures for years, some of which doctors say stem from his treatment for kidney cancer. He had one in the closing seconds of Southern Illinois’ 61-35 home loss to Illinois State on Oct. 15, 2005 and another in at the school November 2001.

Kill was hospitalized on Sept. 10, 2010 for dehydration following NIU’s victory over North Dakota. He missed a week of practices but returned to the sidelines the next Saturday at Illinois.

This was the second health-related scare for a coach in the Big Ten in about a year. Michigan State coach Mark Dantonio had what doctors called a mild heart attack after the Spartans beat Notre Dame last October.

Dantonio missed a game against Northern Colorado and then the following one against Wisconsin after being hospitalized with a blood clot in his left leg, but eventually returned to the Spartans sideline to finish out the season.

While Gophers players looked shocked and concerned to see their coach go down on the sidelines, Kill’s coaching staff remained calm.

“It looks worse than what it is, for the most part,” Claeys said. “He’s never missed a game. We just told our kids don’t panic with it. We’ll keep them up to date.”