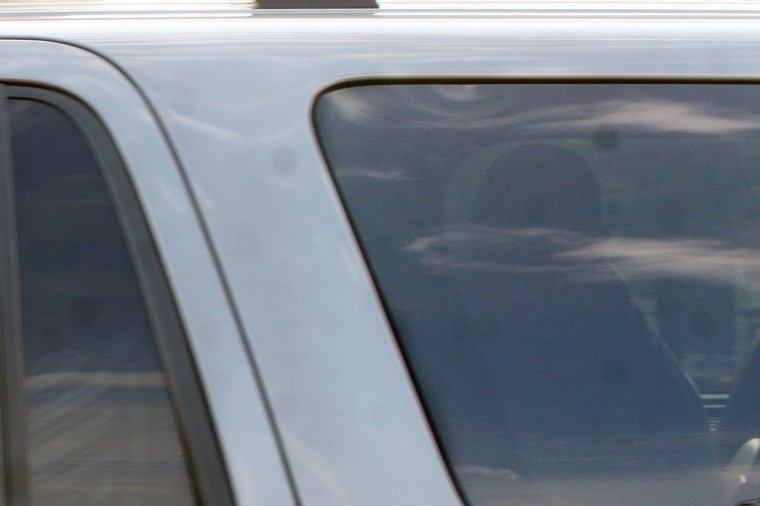 Jack McCullough sits in the back of a Ford Expedition as he is transported from Seattle to the DeKalb County Jail.

UPDATE: Jack Daniel McCullough, the suspect in 1957 kidnapping and murder of Maria Ridulph was transported from Seattle to the DeKalb County Jail at about 4:50 p.m. Wednesday night.

McCullough arrived in a Ford Expedition with tinted windows and was transported into the building through an outdoor garage area.

He is expected to appear in court via closed circuit television on Thursday during an 8:45 a.m. bond call at the DeKalb County Courthouse in Sycamore.

CHICAGO | Illinois authorities on Wednesday began examining the remains of a 7-year-old girl who was abducted and killed more than 50 years ago, trying to find clues that would help them put together a criminal case against a 71-year-old former neighbor.

The body of Maria Ridulph was exhumed early Wednesday, weeks after authorities announced they’d arrested Jack Daniel McCullough in Seattle and charged him with murder in the death of the girl, who was abducted by a man as she played outside her home in Sycamore in December 1957. Maria’s body was found the following spring in a wooded area about 120 miles from her home.

DeKalb County State’s Attorney Clay Campbell said he hopes scientists now can “do a better examination of her remains here in 2011 than were conducted in 1958.

“Suffice it to say science has advanced, thankfully, greatly since that time,” Campbell said at a news conference.

McCullough, a onetime Sycamore resident, waived his right to extradition earlier this month. He was returned to Illinois on Wednesday to face a murder charge, and was scheduled to appear in DeKalb County Circuit Court via closed-circuit television on Thursday for a bond hearing, authorities said. He has denied any involvement in the girl’s death.

When the girl’s body was found, the cause of death was listed as foul play because medical officials at the time lacked any other explanation, Campbell said.

“There’s a certain supposition that when a 7-year-old disappears and is found out in the woods that she was murdered,” but how that happened is unclear, Campbell said.

“I think the job done back then was outstanding considering the state of medical science at the time,” he said. “Now, we can look through the lens of modern science and see that it was inadequate.”

The body was taken to Kishwaukee Community Hospital for X-rays before being returned to the DeKalb County coroner’s office, where it will be examined by a team of experts, including from the FBI and the Illinois State Police, Campbell said.

“We are investigating the murder of a 7-year-old child,” Campbell told The (DeKalb) Daily Chronicle. “Suffice it to say, we’ll leave no stone unturned.”

Authorities have not said what they hope to find, but one cold case expert said a body that has been in a casket for more than 50 years can still reveal evidence crucial to prosecutors.

Some of that information has nothing to do with a suspect, but could nevertheless derail any prosecution if authorities leave any doubt about some very basic questions.

“You have to be able to show it’s a criminal homicide and you have to establish the identity of the victim,” said Richard Walton, an assistant professor of criminal justice at Utah State University and the author of “Cold Case Homicides: Practical Investigative Techniques.”

Walton said even after all this time, there could still be evidence linking a suspect to a crime.

“They might consider fingernail scrapings today to determine if there is any DNA,” he said, explaining that while some DNA degrades over the years, some can still be used.

The key, he said, is the condition of the body, as everything from whether the body was embalmed to whether water seeped into the casket or bugs got inside will determine if there is any useful information.

“You’re not going to know what you have until you open it up,” he said.

Campbell said the experts involved in the exhumation are “very, very satisfied” with what was found, but he would not comment on the condition of the remains out of respect for the Ridulph family.

Maria’s oldest sibling said she cried after hearing her sister’s body had been exhumed, even though she knew it was going to happen.

“It’s brought it back again and crammed it into our faces,” said Patricia Quinn, 70, of Morris. “I had put it to rest a long time ago.”

With no arrests, no new leads and the death of Maria’s parents and investigators involved in the case, the story faded from memory as years passed. McCullough, who told detectives in 1957 that at the time of the girl’s abduction he’d taken a train to Chicago, became the focus of the investigation again last year when a high school girlfriend of McCullough’s discovered an unused train ticket to Chicago behind a framed photograph.

McCullough, then known as John Tessier, lived near the girl in Sycamore, 50 miles west of Chicago, and matched the description of the suspect given immediately after the disappearance by Ridulph’s then-8-year-old friend, Cathy Sigman, who last saw her at about 6 p.m. on Dec. 3, 1957. Sigman said she left Maria with a young man and ran home to get some mittens; when she returned 15 minutes later, the two were gone.

In a July 7 jailhouse interview with The Associated Press, McCullough said he didn’t kill the girl and maintained the same alibi he gave when first questioned by investigators when he was 18: that he could not have committed the murder because he had traveled to Chicago that day for military medical exams before enlisting in the Air Force.