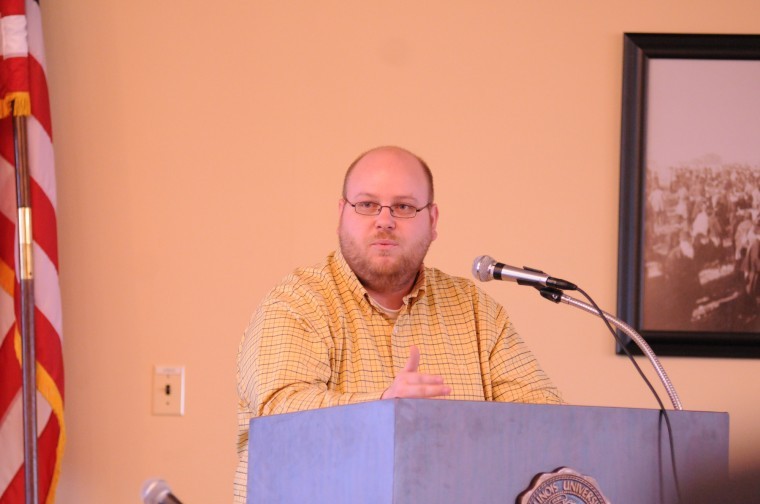 Student Association Senate Speaker Austin Quick speaks at the SA Senate on March 27. The SA just approved their budget for next year on Sunday.

By Danny Cozzi and Shaun Zinck

The budget no longer funds groups for transportation, significantly cutting funding for some groups.

Speaker of the Senate Austin Quick motioned for a debate cap of 45 minutes for the fiscal year 2012 budget of $1.64 million.

The bill was passed within ten minutes and most senators clapped when it was approved.

Quick said he was surprised on account of the speediness of the Senate’s decision.

“I expected there to be more debate,” Quick said. “I think it’s a good budget and we’ll go from there.”

The only matter that was debated within the short time was an issue raised by Senator Nick Wians that the Campus Activities Board has 19 separate phone lines, which cost $383 a month.

No one, however, made a motion to eliminate the funding for the phone lines.

Treasurer Jeremy Sanchez said he was a little surprised by how little the Senate debated the budget.

“Whenever there is change there is always a resentment against the change,” Sanchez said.

Sanchez said he looked over every budget request from all SA organizations.

“I know how important this was because if we didn’t do it, our student organizations wouldn’t be funded,” he said. “I’m very happy with all the hard work from the committee and I’m glad we passed the budget with little resistance.”

Sanchez said NIU is the only university that allows its student government to fund organizations almost entirely. He said the money allocated to the transportation fund will make organizations more accountable.

“Most of the organizations don’t use the money they request through the school year,” Sanchez said to the Senate.

Sanchez said after the meeting if organizations want money for transportation they would need to follow a similar procedure when they request supplemental funding.

Sanchez said the group would submit a request to the finance committee, who would review it and then send it to the Senate for approval.

Senator Derek Koegel said he was shocked with the budget’s easy passing.

“I’m just very happy that the budget got approved with minimal effort,” Koegel said. “It was done with hard work and the senators knew that.”

The Senate approved 11 directors for next semester. Josh Venaas, current director for academic affairs, was approved director of mass transit. Venaas held the position from fall 2009 until he was approved chief of staff last semester.

The Senate postponed the approval of the advertising deputy because it wasn’t clear on whether the position was paid.

SA President-elect Elliot Echols eliminated the director of organizational development position, saying that he felt it was unnecessary. In its place, he created the position of advertising deputy.

Chief of Staff Steven Vaughn is nominated for the position.