Corporations should not be treated as individuals 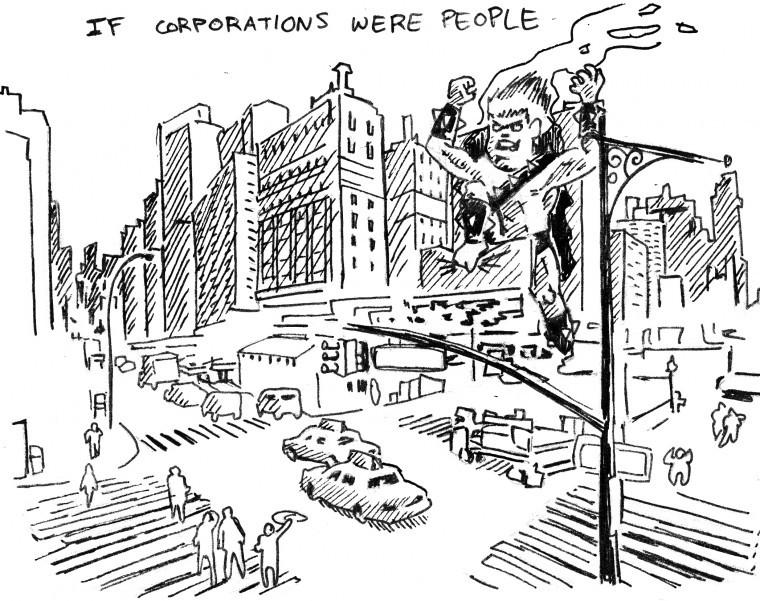 A century-old battle has been fought over the concept of “corporate personhood,” a political construction that grants corporations the same rights afforded to human beings.

On its face, corporate personhood is a matter of logistics–corporations are legal bodies that can sue, be sued, own bank accounts and the like.

It should be understood that corporations are not people at all, but a controversial and ground-breaking ruling made last year grant corporations the right to donate unlimited amounts of money to political campaigns and candidates.

Restrictions are still in place to prevent corporations from donating money directly to politicians, though I wonder how many politicians’ steak dinners and luxury getaways have been gratis, bought on a company dime.

Last year’s ruling is based on a decision that money is a form of free speech, and is thus a breach of corporations’ First Amendment rights to restrict donations to political campaigns.

Some legislators would like to take the ruling a step further and allow direct contributions to politicians. Humorously enough, it is described as putting “businesses on an equal footing with labor unions.”

Yes, those very same unions that are under attack across the country, whose own voice-in the form of collective bargaining-may be stripped from them.

How can buying off politicians with corporate money be so easily seen as an extension of free speech, while the rights of workers to negotiate their pay, work hours and safety standards–all arguably falling under the rights to life, liberty and pursuit of happiness through expression of First Amendment rights–are being curbed?

The fight for corporate personhood is not a balance between the rights of unions and corporations in the context of these legal battles; it’s clearly tipping in favor of corporations, who may soon be able to totally buy the politicians meant to represent us.

In the interest of fairness, neither union nor corporation should be able to donate any money to any political campaign or politician. Like the vote, only individual citizens should have that right.

The first legal strike against corporate personhood only began last week, with the U.S. Supreme Court ruling against AT&T in a privacy battle, arguing that corporations cannot claim personal privacy when subjected to a Freedom of Information Act request.

Even so, it is only a small victory, and one that does not challenge other rights that should belong only to individuals.

A 2008 documentary, The Corporation, details precisely what sort of individual corporations would be. Sharing all the qualities of a person with antisocial personality disorder, they have no empathy for others and will not take responsibility for their actions.

Imagine a man who dumps his daily trash into your town’s water source because hauling it to a dumpster would take too much effort, and you have an idea of what a corporation is on a smaller scale.

It is not hard to find examples of grievous harm done to the environment or human beings by corporations.

Unfortunately, corporations enjoy what I call celebrity immunity–money and fame prevent them from the legal repercussions that any average citizen would face for the same crimes.

If corporations must really insist on being people, then I intend to declare myself a corporation.

That way, I, too, can have extra say in the political process, engage in backhanded deals and enjoy boundless freedom to cause irreparable harm to others (if it benefits me) with none of the consequences. Perhaps the unions should join me.