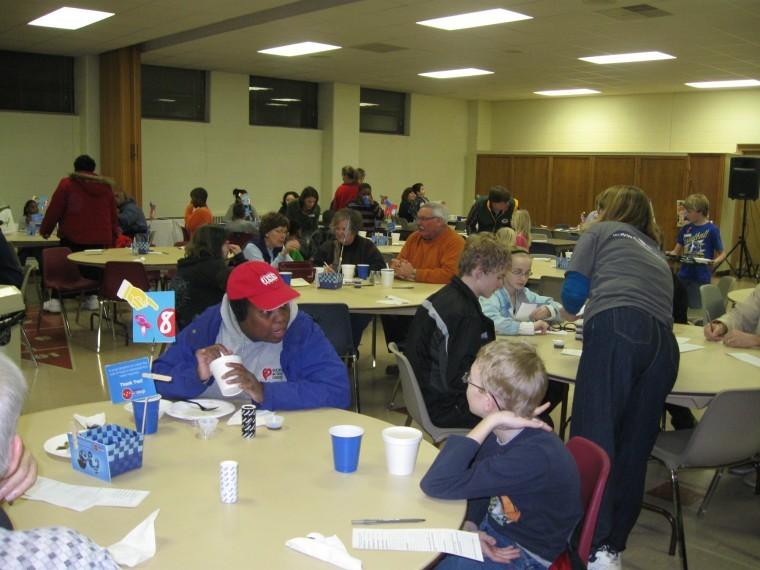 Both died in a car accident Monday night.

The memorial event was held at the soup kitchen from 5 to 7 p.m. on Wednesday in honor of Weber and Getzelman.

Friends of Weber said she was very passionate about her dreams to work with and help children.

Along with studying for school and holding a full-time job, Weber spent time volunteering at Feed ’em Soup.

“She represented everything Feed ‘em Soup stands for,” Lumpkin said.

He said Weber was known for being “up and willing” to help anybody who came to the kitchen.

“She was the most unlazy person I knew,” Lumpkin said.

Weber volunteered at Feed ‘em Soup for close to five months. Her influence affected the entire organization’s practice. Lumpkin said that things picked up when Weber joined the charity.

“It’s a tough loss,” Lumpkin said, “She brought a lot of people here.”

Janessa Davis-Falco, a close friend of Weber, said “she didn’t walk; she bounced.”

“She always smiled. She was genuinely happy,” Davis-Falco said. “She’d be mad at us for being sad.”

Weilbaker said Weber considered social work, which was reinforced by Davis-Falco, who said Weber felt like she had to help kids.

Weber was also very close to those she volunteered with. There were many people at the event to honor Weber and Getzelman as well as support each other.

Josh Akers remembers Weber as being all smiles.

Akers raved about Weber’s impact on Feed ‘em Soup as being uplifting and heart-warming. However, he found it hard to describe with detail.

“You can’t explain how it was,” Akers said. “It’s just a feeling you have.”

Collin Bredeson said Weber always made an effort to make everyone feel welcome.

Cali Swan said Weber made everyone happy when she walked in the room.

“She had not a single mean bone in her entire body,” Swan said.

Akers, Bredeson and Swan are all volunteers at Feed ‘em Soup and friends of Weber.

“Everyone is going to miss her,” Swan said. “But her smile and warmth is going to live on.”