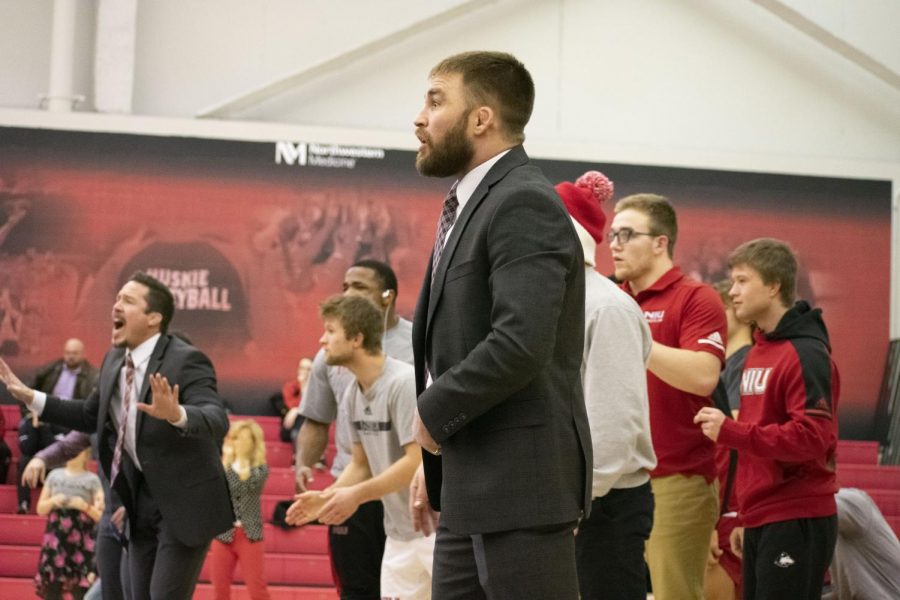 DeKALB — Wrestling Associate Head Coach Dominick Moyer has already paved an amazing career in wrestling with a decade of coaching following a college career during which he competed on a national stage.

It all started with a childhood accident and his recovery.

“I fell out of a tree trying to get a kite,” Moyer said. “I broke my leg and was coming back from that, and a guy my dad works with was running the local kids’ club and said ‘I think wrestling would be good for him [as rehabilitation.]’ So we tried it out, and here we are.”

Moyer, who was promoted to associate head coach in November, has been a crucial part of NIU’s success this season, helping develop the skills of the younger wrestlers. Head Coach Ryan Ludwig said credit for the team’s success falls heavily on the work of Moyer and Assistant Coach Kyle Springer.

“This was an elevation that’s been a long time coming,” Ludwig said. “He’s incredibly important in the development of some of these individuals. When you talk about some of these young guys being able to find more solid levels of technique, guys like Coach Moyer and Coach Springer play a big role in that.”

Moyer said the promotion at the start of the season was gratifying and proof that his hard work had paid off.

“It’s a fantastic thing,” Moyer said. “I appreciate Coach Ludwig having the faith in my leadership to give me the promotion and noticing the hard work that’s been put in. It is rewarding to see that.”

The 35-year old was a two-time Iowa State Champion at Oskaloosa High School before joining the University of Nebraska wrestling team during the 2002-2003 season.

During his time as a Cornhusker, Moyer secured three straight NCAA Championship appearances at 141 lbs. Moyer was also a mainstay of the Big 12 Conference Championships, appearing in the finals twice.

Moyer graduated in 2007 with a degree in health services but had no expectations for the future. He ultimately decided to return to Nebraska as an assistant coach and said he enjoyed some aspects of college wrestling so much that it didn’t take much convincing.

“I didn’t know exactly what to do after college so that opportunity presented itself,” Moyer said. “I knew I really enjoyed that aspect of being hands on, teaching, watching the growth of others and also breaking down film. It was a great fit.”

A year later, in 2008, Moyer came to NIU to work under then-Head Coach Dave Grant, and he’s been part of the program ever since.

Being fresh out of the college game himself, Moyer still feels he has a lot of advice to pass along to young wrestlers, even 12 years later.

“I understand what these guys are going through,” Moyer said. “The successes I’ve had can help show them the way, but I think the biggest part of that is the ups and downs of everything and having a consistent mindset and a great attitude to go from one thing to another.”

The main thing Moyer said he tries to help wrestlers with is the slog of a season that spans five months with rigorous training that often tests the durability of an athlete.

“The season is long, and it’s a grind,” Moyer said. “So continue improving, win or lose, and understand that’s the process, and it’s not always going to be nice to you. [You’re] got to stick with it and reap the rewards when you’re able to.”

Moyer’s role in the program goes beyond helping his wrestlers on the mat.

Moyer plays a role in recruiting, for the team. He attended a day of the Illinois High School Wrestling Championships in Champaign earlier this month.

The coach also serves as the team liaison with Student-Athlete Academic Support Services. SAASS works with student athletes to provide resources to help them with academics, which Moyer believes is an important aspect of a wrestler’s career.

“First and foremost, they’re here to get a degree,” Moyer said. “Unfortunately for them, there isn’t really a professional league of wrestling. So we have to make sure we get them ready, not just [for] all the challenges in the sport, but [for] having that degree for that side of things. It’s extremely important on that end.”

Moyer said he believes that strong grades lead to strong performances in wrestling, and results from NIU wrestlers can back him up. Redshirt sophomore Bryce West was not only among the four wrestlers named to the Academic All-Mid American Conference Team last season, but also punched his ticket to the NCAA Championships.

The focus right now is on preparing his team for the MAC Championships on March 7 and 8 at the Convocation Center. Beyond that, Moyer said he wants to make a lasting impact on college wrestling and the world.

“The immediate future is finishing strong this season and helping the guys here at NIU be the best they can be on the mat and off the mat,” Moyer said. “In the long term, I’d like to be a head coach some day and run my own program. Overall, just have a positive impact on the world and make a change and I do that through communication and kindness to people, so that’s what I want to do.”