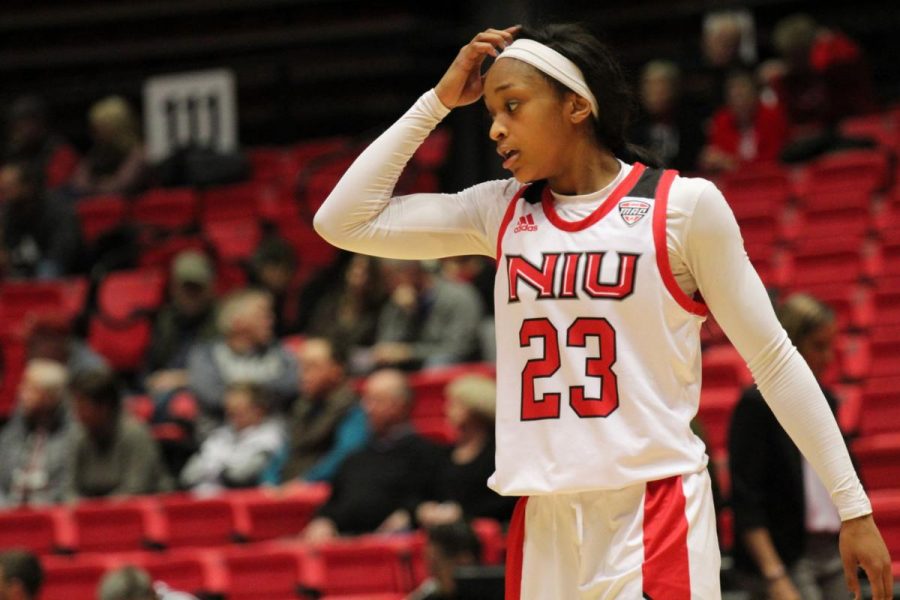 DeKALB — The women’s basketball team ended its three-game losing streak Wednesday against the Eastern Michigan University Eagles. NIU defeated EMU 65-59 in a game where both teams had a combined 39 turnovers.

“It’s always good to get the win you know, obviously at home as well, they have been a little few and far between, so we are not giving any back,” Head Coach Lisa Carlsen said. “It was not the prettiest basketball game to say the least, but I was proud that we found a way to get it done, I think that it’s important as we try to build a little bit of momentum going into the conference tournament.

Outside the ball control issues, EMU had several key players in foul trouble including center junior Autumn Hudson. Hudson averages five points per game and 7.2 rebounds per game on the season

On Jan. 25, Hudson scored 13 points and grabbed 10 boards in a 62-55 win against NIU in Ypsilanti, Michigan. In the game on Wednesday, Hudson fouled out with three points and only played 19 minutes.

“I think [Hudson] is a completely different dynamic for them, we did a much better job than we did when we were at Eastern of trying to be aggressive and making [Hudson] guard,” Carlsen said. “I think that was a big factor, because [Hudson] was such a huge factor for them in Ypsilanti, they don’t replace [Hudson] with somebody else of her caliber.”

Both teams got off to a slow start early in the first quarter, combining to make one of the first five shots in the game. NIU shook off the slow start and took control of the quarter after a 19-8 run, capped off by a 3-pointer by Woods.

NIU took a 21-12 lead after the first quarter, led by Nikitinaite with eight points. EMU’s top performers were redshirt sophomore guard Juanita Agosto and Combs with four points each.

“Coach emphasizes in the locker room every game when we go out and play, we have to start strong in the first quarter, so I felt like we did a great job doing that.” Nikitinaite said.

NIU extended its lead to ten at 28-18 with a little under six minutes left in the second quarter after a layup by Woods. NIU failed to build on its lead as it went scoreless in the final five minutes of the half.

NIU’s scoring drought let EMU cut the deficit to six after a pair of free throws by Cardwell with under two minutes left in the quarter. NIU took a 28-22 lead into halftime only scoring seven points in the second quarter.

Senior forward Ally May was NIU’s leading scorer with three points, while EMU’s top performer was Combs with six points.

EMU once again cut the lead down to three, 56-53, with a little over two minutes left to go in the fourth quarter. NIU withstood the Eagles late push and went on to win the game 65-59.

In the fourth quarter, NIU was led by Starks with five points and two boards, while EMU’s top performer was junior guard Courtnie Lewis with seven points

With the win, NIU’s record moves to 9-17 and 5-10 in the Mid American Conference for the season. NIU’s next game will be 1 p.m Saturday against the Western Michigan University Broncos in Kalamazoo, Michigan.

That game can be watched on ESPN 3.