Hockey loses back and forth game to Maryville University 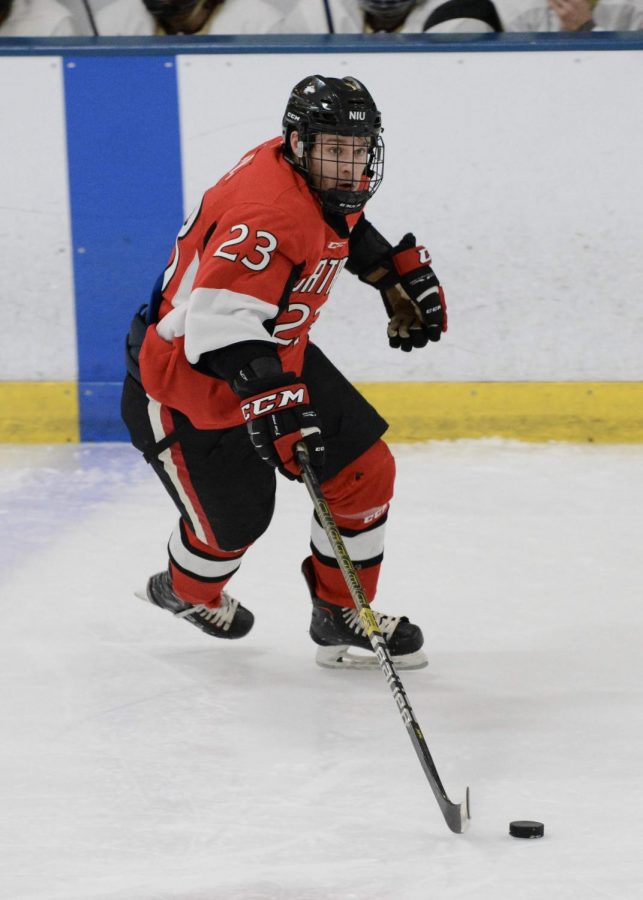 DeKALB — Hockey held a pair of leads but couldn’t secure the victory, losing to the Maryville University Saints Friday night.

NIU had some opportunities, but could never distance itself from Maryville after gaining the lead twice. This allowed the Saints to keep pace with the Huskies and eventually pull away in the third period, handing NIU an 8-5 loss.

The Huskies were firing on all cylinders early. They were piecing together quality offensive possessions and getting quality chances on net. The sustained pressure allowed first-year forward Austin Walny to find the back of the net just 2:36 into the opening period. The goal was Walny’s sixth of the season.

Each team’s offense ramped up in a second period that saw three lead changes. The Huskies opened the scoring when senior forward Brad Krauser carried the puck in on a 2-on-1 breakaway. Rather than pass it off to sophomore forward Brandon Ledyard, Krauser pulled the trigger and it paid off, giving the Huskies a 2-1 lead just 1:30 into period two.

Later in the second period, the Saints would score two unanswered goals to claim a 3-2 lead. But with 5:02 remaining, first-year forward Mason Ihrke buried the biscuit to tie the game at three apiece. Though the lead didn’t last long after Maryville reclaimed a one goal lead just 58 seconds later. As the second period wrapped up, the Saints led 4-3.

Maryville continued riding the momentum in the third period, scoring twice in the first 1:40 of the frame. About seven minutes later, the Saints would scored on the power play to take a commanding 7-3 lead.

The Huskies offense started coming along later in the period. With 6:02 left, Ihrke scored a breakaway goal while NIU was shorthanded to cut Maryville’s lead to three. Three minutes later, first-year forward Rodahn Evans scored to make it a 7-5 game.

But it was too little too late for NIU, as Maryville clinched the win with an empty net goal with about one minute left in the game.

The loss is NIU’s seventh straight, dropping its record to 5-25 and 5-10 in Midwest College Hockey play.

The Huskies will celebrate Krauser, their lone senior, on Saturday evening before the team competes in its final regular season game before MCH playoffs. The puck will drop 4:50 p.m. at Canlan Ice Sports in West Dundee, and the game can be watched on NIU Hockey’s Facebook page.