Hockey ends the regular season on high note, looks ahead to MCH playoffs 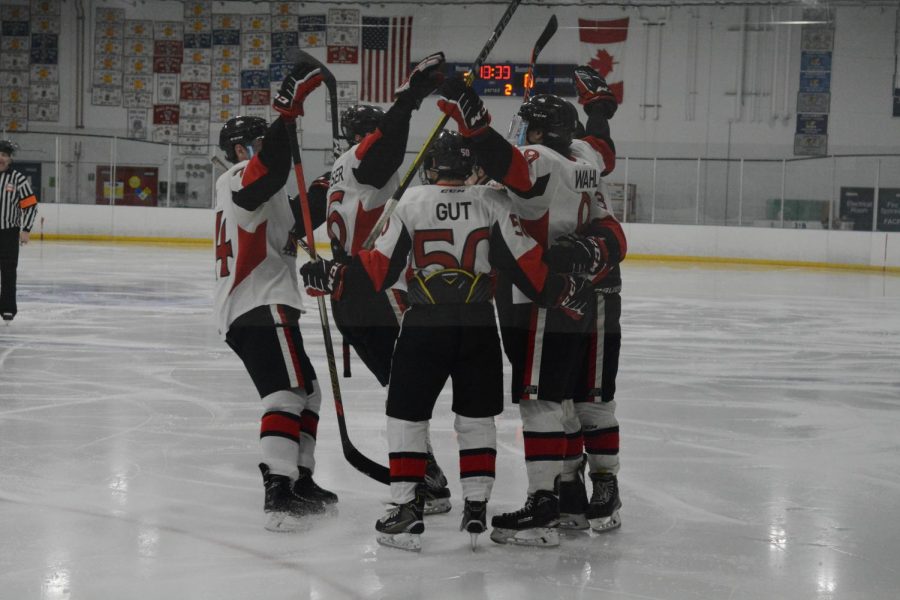 NIU celebrates a goal against Waldorf University on Feb. 2 at Canlan Ice Sports in West Dundee. The Huskies would go on to win 5-4 in overtime.

The Huskies and Saints played a tight game that required a shootout to decide a winner.

On Senior Night, NIU’s lone senior was the hero, scoring the game winning goal in the shootout. Pair that with Eisele’s stellar performance, saving 44 of 47 Maryville shots, and it was enough to land the Huskies in the win column.

Saturday’s win over Maryville was significant because the Huskies will most likely face the Saints on Friday in the Midwest College Hockey playoffs. Maryville took three of four games over the Huskies this season, but Head Coach Mike Rucinski said NIU getting the most recent win was a confidence boost.

“I think from a psychological standpoint, the team is in a good spot right now,” Rucinski said. “Especially if we play Maryville, coming off the win and the fact we played them tough all four games this year.”

The Huskies started the game on their heels, allowing Maryville to win the time of possession battle. This resulted in the Saints getting the first goal of the game with 16:02 left.

Things slowed down in the second period, with neither team able to formulate sustained offensive pressure. The only goal of the period came when Maryville scored on a 4-on-4 with 17:56 left. After two periods of play, the game was tied up at 2-2.

In the third period, a nice feed from first-year forward Hunter Wahl set Evans up nicely to score the go-ahead goal with 18:35 remaining. The goal was Evans’ second of the night and third of the series.

The lead wouldn’t last for long after Maryville scored on the power play about three minutes later. Neither team could break the tie before the final buzzer sounded, bringing the game to overtime.

Despite quality chances for each side, five minutes of OT couldn’t determine a winner, forcing a shootout.

After Eisele stopped the first attempt from Maryville, Krauser was able to get the puck by Maryville senior goaltender Arren Romeril. Eisele would stand tall twice more against the Saints to clinch the victory.

The win snaps the Huskies’ seven game losing skid, bringing their final regular season record to 6-25 and their MCH record to 5-10.

The Huskies will hope to keep the positive momentum rolling Friday as the first round of the MCH playoffs commence at the Maryville University Hockey Center in Chesterfield, Missouri. The tournament is single elimination, and if NIU wins, they’ll play in the semifinals on Saturday.

The Huskies will look forward to treating the playoffs as a chance to reset and build off Saturday’s win.

“Playoffs is a whole new element, whole different style of game,” Krauser said. “What happened in the regular season really doesn’t really matter, everyone’s 0-0 going into playoffs. Anything can happen, anyone can beat anybody.”

NIU’s first round opponent and scheduled start time have not yet been determined.