Janson connects with audience in DeKalb 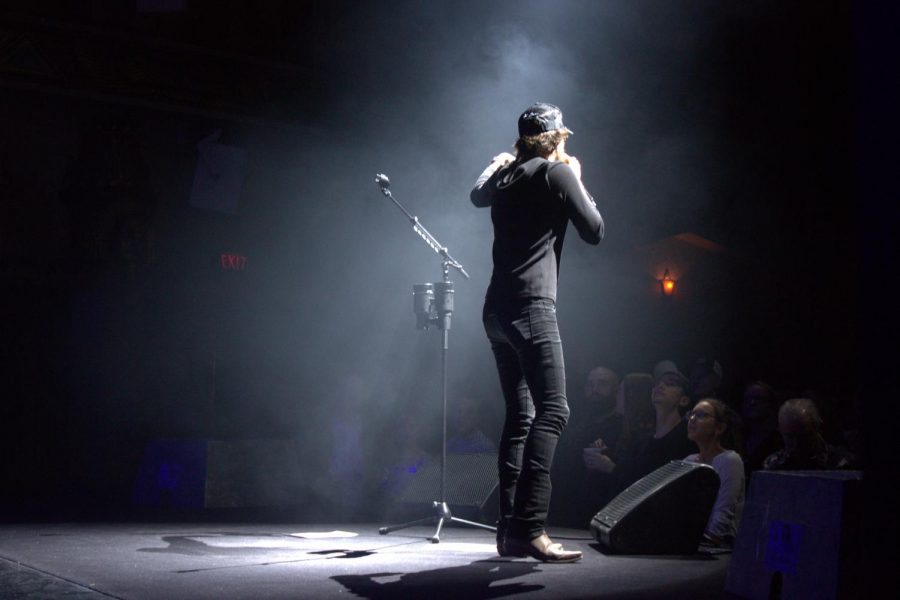 DeKALB — Country artist Chris Janson kept it real with his fans in DeKalb on his Real Friends tour, telling personal anecdotes attached to his songs and personalizing what songs he played to the stories of his fans. His hospitality and gratitude diminished the separation between celebrity and fan.

Fans were treated to a brand new song Janson wrote just 30 minutes before hopping on a plane to fly to the DeKalb show. The song, which remains titleless, is the first he’s written since releasing the “Real Friends” album and going on tour.

Janson performed the song, explaining he had written it about his wife, and the audience cherished every second, holding the loves of their lives.

“If it hadn’t been for you,” Janson sang. The lyric was the hook of the song which he sang repeatedly as he plucked the strings of his acoustic guitar.

Janson stood vulnerable under the lights with the guitar, singing the homage to his wife for fans to see him as just a person, and to witness the birthing of a new song.

The song was delicate, genuine and refreshing compared to his upbeat songs on the radio.

Celebrating with the audience, Jason announced that his album went gold, and said he’s certain next week everyone will see his song “Done’’ on the top 30.

“Can you imagine me with a silent audience?” Janson asked the audience. “No,” the audience screamed at him and laughed at the thought of an inanimate and mellow audience in the presence of Chris Janson.

Growing up in the midwest, Janson was also surrounded by corn like the crowd of people standing in front of him. He said he was raised on simple values as a kid, relating to his crowd.

Gliding on this invisible connection, Janson acknowledged that there might be someone experiencing anxiety, depression, a problem at work or anything in between in the crowd tonight. For a moment those thing would be muted and left behind, Janson said. Getting the crowd to celebrate being alive despite their obstacles, he performed his hit song “Good Vibes” which reached No. 1 on the Billboard Top 100 in October.

It changed the entire energy of the room. In that moment, words hurt less, and everyone understood life is too short to sweat about the small and insignificant things.

The country artist believes fans cannot connect to other musicians who don’t have problems, or at least don’t vocalize them. This humanized the celebrity to a crowd full of people who were honored to be in the same room as him. It was a real friendship.

The celebrity still shops at Walmart, and when Rolling Stone interviewed him, he bought 12 copies, he said. The magazine called him the “most open-minded redneck on the block,” so he embraced this title by writing his song “Say About Me.”

Fans expressed congratulations by singing along and dancing to his song.

At the meet and greet before the show, a woman told Janson about her late husband, a story that Janson said touched him, leading him to perform “Hawaii On Me.” Before hearing that story, Janson said he wasn’t going to perform the song, he said. The song captures the feeling of what it’s like to lose a loved one, but love each other enough to live once the other passes, and the audience was moved. Janson leaned down from the stage and embraced his fan in her time of heartbreak.

Although the transition was abrupt, Janson played his upbeat song “Waitin’ on 5” after the remembrance of his fan’s husband, saying it’s good to be alive and that in itself is a great blessing. The contrast changed fans’ slouched and sad shoulders into flailing arms moving to the music; sorrow-filled faces became cheerful smiles once again.

The switch was appreciated rather than offensive. Although he recognized that death is inevitable and problems exist, Janson successfully elicited an excitement for life.

The opener for the night, Matt Roy rang in the spirit of love with songs like “Wildflower” and “That Town, That Truck, That Song.” He co-wrote Janson’s song “Done,” one of Janson’s few songs to make it to the top 40 country songs. This shortly became Roy’s first hit single.

By tailoring the show uniquely to DeKalb with songs the crowd can relate to and feel, the celebrity Janson shrank, forming a connection between himself and his midwestern audience. DeKalb seemed to become Janson’s real friends, despite the raised stage he stood upon and the flashing lights illuminating his outstanding performance.