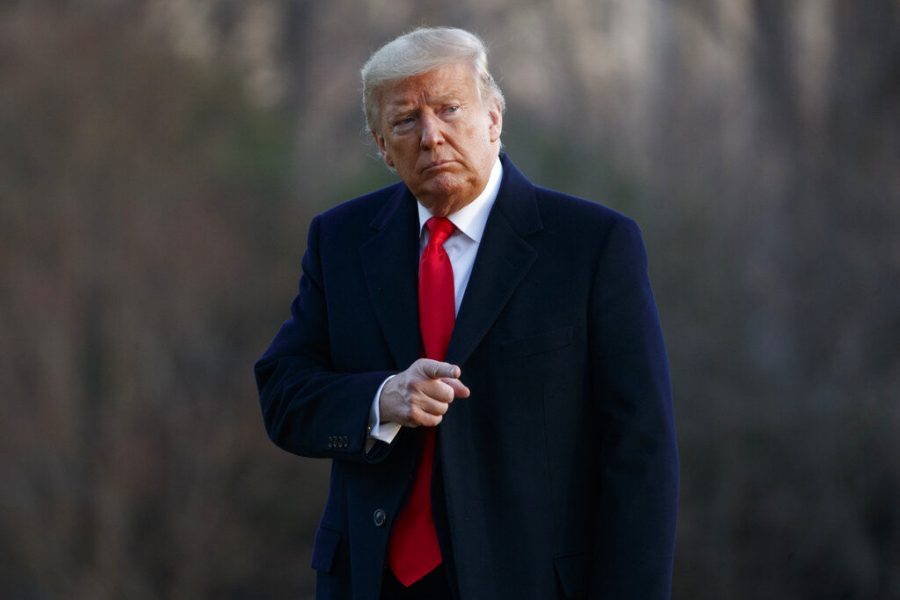 President Donald Trump points to the media as he arrives at the White House in Washington, Saturday, Feb. 29, 2020, on Marine One as he returns from speaking at the Conservative Political Action Conference.

DeKALB — The U.S. Senate’s Feb. 5 acquittal of President Donald Trump marked the end of the third impeachment trial in over 200 years of the country’s history. NIU’s group of experts on the U.S. Constitution provided historical context for the impeachment process.

A three-person panel of NIU professors discussed what impeachment entails, whether it’s a legal or political procedure and whether it matters at all 4 p.m. Tuesday in the Holmes Student Center’s Clara Sperling Sky Room.

Telman discussed impeachment from a constitutional perspective before getting into his assessment of the Trump proceedings. He said the framers’ intent behind including an impeachment clause in the Constitution was to prevent the United States from becoming a repeat of the British Empire, whose king couldn’t be subject to removal from office by Parliament.

“The main thing is, you couldn’t impeach the king because the king, quite literally, was above the law,” Telman said. “The point of impeachment was the president was not supposed to be.”

Article I, Section 2 of the Constitution grants the House of Representatives the singular power to impeach a sitting president, while Section 3 grants the Senate the power to adjudicate all impeachments and ultimately convict the president if he is found guilty of the charges brought against him.

Article II, Section 4 of the Constitution states that the president can be impeached and removed from office on charges of “Treason, Bribery, or other high Crimes and Misdemeanors.” Telman said the phrase “high crimes and misdemeanors” is understood to mean “abuse of power;” in other words, the president’s actions don’t necessarily have to be criminal in nature for him to be impeached.

High crimes and misdemeanors are grounds for impeachment, stemming from the framers’ concern for corruption. The framers feared the president would be incentivised to do everything they could to remain in power, Telman said.

“Without term limits, … [as] there were no term limits until after [Franklin D. Roosevelt, the president] could then become the equivalent of a monarch,” he said.

Telman said he thinks the House Democrats were right to impeach Trump, given the evidence surrounding Trump’s solicitation of Ukrainian assistance in the 2020 presidential election and Russian assistance in 2016.

“[This] is impeachable conduct — the very type of conduct about which the framers were concerned,” he said. “And, unless checked, it was clear based on the president’s past conduct and statements that he would continue to solicit support from foreign governments in defeating his political opponents in the 2020 election.”

Additionally, Telman said there are no constitutionally established rules for how impeachment hearing and trial procedures should be executed and, thus, the House and Senate majorities get to decide on their own rules. Because of this, neither the House Republicans’ nor the Senate Democrats’ objections to the procedures chosen held any legal weight, he said.

“There’s no rules,” he said in regard to the Senate impeachment trial. “It’s not a regular trial — they can call witnesses, they cannot call witnesses, it’s up to the majority.”

Pickerill said it’s important to understand the Constitution in terms of the role it has played throughout history in establishing precedents, which create political norms and traditions.

Pickerill discussed the parallels he has observed between the impeachment of former President Bill Clinton in 1998 to Trump’s impeachment in 2019. He said he thinks the Clinton case set a precedent, especially due to the hyper-partisan nature of our politics today.

“I think it set a precedent that worked against Trump’s opponents and in favor of the president,” he said. “Look no further than [Senate Majority Leader Mitch] McConnell’s adoption of very similar procedures for the Trump impeachment proceedings as the Clinton [proceedings]. … That wasn’t an accident.”

One observation Pickerill has made is that the Democrats in Congress drew a partisan line in both cases when it came time to vote. He noted that, in 1998, only five out of 206 House Democrats voted for any of the four articles of impeachment brought against Clinton, a Democrat, while 81 of 228 House Republicans voted against one of them. All 45 Democrats in the Senate voted against convicting the president in 1999, and they were joined by at least five Republicans.

In 2019, only two out of 231 House Democrats voted against impeaching Trump, a Republican, for abuse of power, with three voting against impeaching Trump for obstruction of Congress. In addition, all 45 Democrats in the Senate voted in favor of conviction on both charges in 2020, with Sen. Mitt Romney being the only Republican to vote alongside Democrats on the charge of abuse of power.

“Partisan, yes. But it’s in both cases you could argue that the Democrats were as partisan, if not more so, than Republicans,” Pickerill said. “And I think that the Clinton impeachment, in part, served as a motivation for Republicans to stand by [Trump].”

Another observation Pickerill made was that the arguments used to defend the president and dismiss the charges against him, in both cases, were largely legalistic in nature.

One example Pickerill used to demonstrate this point was when former Sen. Russ Feingold argued that the perjury charge against Clinton relied too much on “frivolous” allegations for it to be taken seriously. He added that Trump has similarly made legalistic arguments in defense of himself, with Trump saying that he hadn’t violated any laws and that there wasn’t enough evidence to convict.

“At the end of the day, it seems to me that … the takeaway is that politics matter,” Pickerill said. “The partisan divisions, today, run deep. I think the Clinton impeachment made it defensible to vote on partisan lines to save your own partisan and to make it, essentially, a high kind of legalistic standard that it was not … intended to be.”

Romero said she was uninterested in the Trump impeachment proceedings due to the highly political nature of the entire process.

“I didn’t really observe any of the impeachment … because I already knew that it was all rather pointless,” she said. “I don’t bother even worrying about it at this point.”

The commonly held notion is that the Constitution is a profound legal covenant, Romero said, adding that she, on the other hand, views it as nothing more than a political document.

“It establishes some rules that we get to play by and that’s it,” she said. “[It] was meant to, frankly, protect white men and their property from anyone else taking it. … It was not written for people like me, and, in that sense, I really have a hard time completely taking it seriously.”

Romero said this perception she has of the Constitution shapes her opinion on what the framers meant when they wrote Article II, Section 4.

“When I read that [section], and I think of all this debate that we have as to what that really means, to me it just seems very clear that it is anything that the House wants it to be.”

Luce Nguyen, undergraduate student at NIU and research assistant at the University of Kentucky College of Law, co-wrote an op-ed for Jurist about how former President Barack Obama’s infamous tan suit could have been used as grounds for impeachment based on the vague language of the Constitution. Romero cited this as an example of how the power of impeachment can be a tool for political gain.

“If the House were so offended by [Obama’s suit] and decided to go forward with impeaching him over his bad fashion taste, who’s to stop that?” Romero said.

The polarized nature and unsurprising result of the Trump impeachment case exemplified what Romero held to be true about impeachment, which she said is dispiriting for her.

“I guess what I’m really looking at is bringing this sort of nihilistic viewpoint that I feel like this entire impeachment process has really just reaffirmed for me,” she said. “Like, what really is the point here?”