Hockey reveals what they’ve learned about their teammates 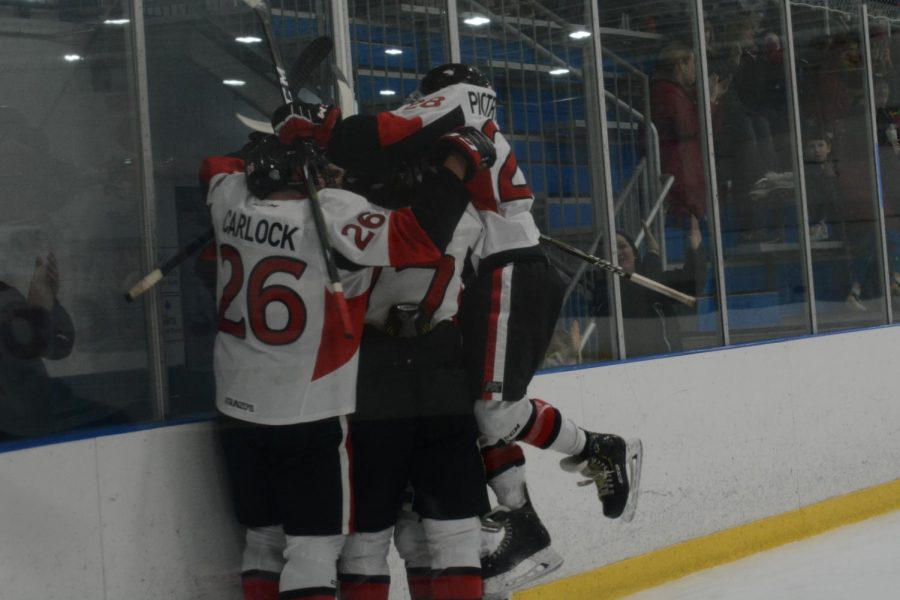 A group of Huskie players celebrate a goal Jan. 10 during NIU’s 4-2 loss against Kent State University at Canlan Ice Sports in West Dundee.

DeKALB — This hockey season was NIU’s first at the American Collegiate Hockey Association’s Division 1 level. After the bump up from the Division 2 ranks, the team was able to recruit higher-skilled players.

This meant NIU saw a flood of new faces on the D1 roster. Only four of the 22 players on the team were Huskies last season.

Now that NIU’s season is drawing to a close, the players have gotten to know one another pretty well. The Northern Star sent out a survey to team members to learn more about the Huskies.

Teammate who is always running late

Sophomore forward Zach Huggins recalled a time when the team implemented a rule stating any player late for a game would be benched for the first period.

“This was the first game after we made this rule, and we had three guys show up late,” Huggins said. “Then we’re all looking around like, ‘Where’s Chad?,’ and he was our only goalie that weekend. So we knew we couldn’t sit him. So we were like, ‘All right everybody, this is a warning day; don’t be late again.’ So he got off the hook on that one.”

This category was the most contentious, but Dodero received 43% of the votes to give him the title.

“I would beat [Dodero],” Walny said upon hearing he received 7% of the votes. “I have to say I am the best [NHL] player on this team. Every time we go hang out at [first-year forward Rodahn Evans] or something, we’re always playing [NHL], but I’m usually the one that comes out on top.”

Evans is also extremely confident in his abilities, saying he has no doubt in his mind that he’s the best at EA Sports NHL.

“I’ve never lost to [Dodero or Walny], so they’re all just blowing smoke,” Evans said. “They hate it. They just won’t vote for me because they talk so much shit.”

Evans later revealed he once lost to Walny in a game that went into triple overtime, which he claims doesn’t count.

Teammate who spends the most time on his phone

Walny’s teammates selected him as the player most glued to his phone. Walny received 40% of the votes, handily beating first-year forward Nick Podlesak who came in second with only 13%.

Walny was bewildered upon hearing the news of being voted for this category.

Huggins and first-year forward Mason Ihrke admitted most of the team spends a significant amount of time on their phones, but Walny stuck out as one of the most consistent users.

“The coaches at dinner sometimes will say, ‘[Everybody has] got to put their phones away,’” Huggins said. “Walny is always the one that’s [kind of] sneaking to look. There’s a handful of them, but he’s definitely one that’s always sneaking a peek at the phone when he can.”

Evans, on the other hand, believes it’s a bit more cut and dried.

Teammate who could survive by himself in the wilderness

Ihrke’s love for hunting and fishing gave him 56% of the votes for this category. He’s a mechanical engineering major, and he often makes gadgets to use in the wilderness.

“That kid is an outdoorsman through and through,” Huggins said. “He loves the outdoors. It’s been so cold out this winter, and he has this little spot in the woods out near campus where he sets a little campfire up and has people over to sit around the fire. Just some random little spot that he made himself.”

Teammate you would most like on your side in a fight

First-year forward Noah Carlock won in a landslide in this category, receiving 94% of the votes. The only person that didn’t vote for Carlock was the 6-foot, 240-pound forward himself.

Carlock said he boxed growing up and got in many fights during his days as a junior hockey player, saying he won about 75% of the scraps he got in.

“I’d want Carlock in a fight because just looking at him, looking at the facial hair, he looks crazy,” Gonzalez said. “Just straight up, the first time I met him I was like, ‘Oh, I’m not going to [mess] with this guy. He’s scary.’ That was in the summer, our first summer skate; he was the first kid I met at NIU. He’s a nice guy off the ice, but if you piss him off on the ice, he’s crazy.”

Gonzalez also said he feels much more comfortable on the ice when he knows Carlock is out there backing him up.

“If I’m on a line with Carlock, I know I can go play my game, talk a little trash to the other team because I know if it comes down to it, he will handle my lightwork,” Gonzalez said.

Teammate with the best hair

Huggins received 53% of the votes, giving him the best hair on the team.

Walny speculated that Huggins likely uses hairspray along with other products to keep his hair looking pristine, but Huggins said the key is using high-quality shampoo and conditioner along with anti-frizz product to tame his curly hair.

Huggins said people shouldn’t be afraid to be more dedicated to their hair if they want better results.

“Just don’t be afraid to use some product,” Huggins said. “You got to spend a little extra money to get the result you want. Don’t be afraid to put effort into your hair. Sometimes if you want it to look good, it’s going to take some work.”

Teammate who is the best DJ

Carlock’s 33% of the vote was enough to give him the title of best DJ. His teammates recognized his awareness to play the right music at the right time.

“Usually I’m only DJ before games, so I personally think rock gets everybody going, gets you in the mood to hit somebody,” Carlock said.

Coming in second place as best DJ was anybody but sophomore defenseman Alec Porzondek. Porzondek’s teammates aren’t big fans of his music selection. His fellow Huskies said his awareness of the situation isn’t as strong as Carlock’s.

“He doesn’t cater the music to the audience or event that’s taking place,” Gonzalez said. “For example, before a game me, Carlock and [first-year forward Osman Cholak] listen to rock music to get us in the mood to run people over. When we get to the locker room, [Porzondek] just plays a lot of rap. He’ll sometimes play love songs, which makes no sense.”

Teammate with the best fashion sense

“For my fashion sense, I just always live by look good, feel good, play good,” Gonzalez said. “So if I feel good and I look good, I’m just going to play good. I’ve lived like that my entire life.”

Traditionally, Gonzalez wears only one color on game days.

Teammate who is most likely to be a millionaire one day

The votes were spread out among many players, but sophomore forward Tyler Gut’s 27% was enough to land him the top spot. According to Gut’s teammates, he has two traits that could translate to monetary success later in life.

The first is Gut’s ability to think outside the box.

“I sit next to him in the locker room, and he’s got some interesting ideas sometimes,” Ihrke said. “Just some of the things he says, not business ideas, but for things we could do as a team or if he sees a video on Instagram, he’ll make some interesting comments that other people wouldn’t think of.”

Teammate with the best nickname

Walny said the nickname started out as a joke, but at the team’s white elephant party, a teammate got Podlesak a stuffed poodle. This cemented Podlesak’s nickname.

“I thought ‘Poodle’ was a funny name, so I started calling him that, and he got very upset about that so he wanted everyone to start calling him ‘Pods,’” Gonzalez said. “That’s what mostly everyone calls him now is ‘Pods’ or ‘Poodle.’ We usually call him ‘Poodle’ when we want to piss him off.”