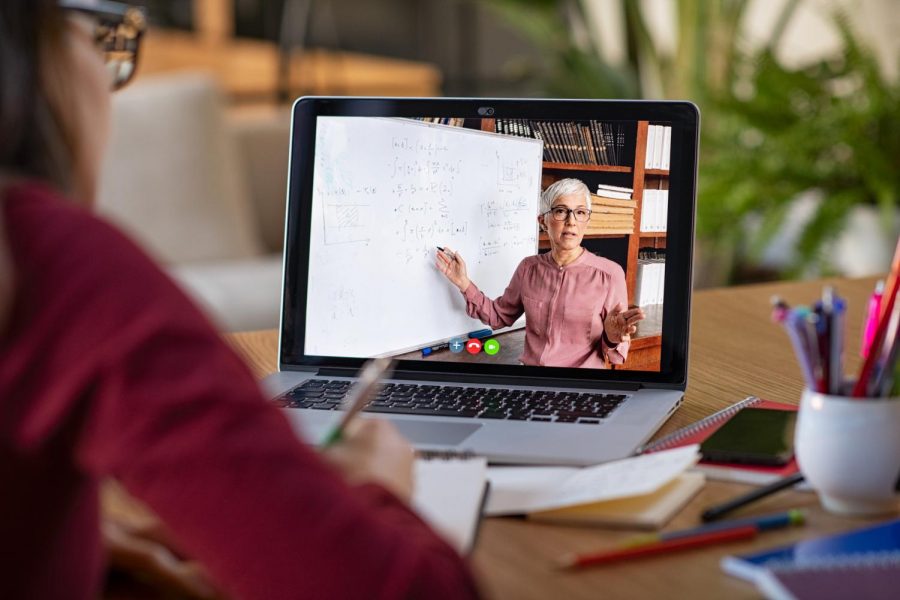 With the transition to in-person learning on the horizon, continuing to provide virtual classes will make learning more accessible for students.

DeKALB – Both students and professors at NIU have had to rearrange their entire lives to continue the Spring 2020 semester amid COVID-19 concerns. Due to the closure of the NIU campus, many students have moved back home, teachers have had to transfer courses online and everyone has to stay indoors.

The rest of the academic year has been spent doing coursework online, and many students have had to move out of their residences, both residence halls and apartments, to move back home.

Connor Murphy, sophomore mechanical engineering major, said he had to move out of his residence hall in Neptune East Hall and is currently living with his brother.

“Moving out was a little hectic,” Murphy said. “I took only my essentials with me and moved everything else to my parents’ place. I also wasn’t used to people acting like electrons and staying as far away as possible.”

“I just thought I was going home for spring break.” Like many students at NIU, John McCombe, a sophomore Communication major, never thought that he’d be spending the next several weeks confined indoors.

McCombe, a resident of University Plaza apartments, has also moved out and is currently living with his family while he finishes the spring semester.

“Home is really the safest place for me during this time,” McCombe said.

Currently taking 18 credit hours of classes, Murphy finds that one of the biggest challenges of online learning is getting past all of the distractions to work on schoolwork.

“I also miss hanging out with friends and being able to ask questions on a face-to-face level with teachers,” Murphy said.

“As a math major, I haven’t had as bad of a change as people in other majors,” Herbig said. “I’ve been teaching myself most of the material out of textbooks before the class cancellations anyway because that’s how it’s so supposed to be for upper-level math classes.”

Herbig said he has concern for students whose majors and classes hinge on participation and in-class work.

One aspect of in-person classes that Herbig missed is the social interaction among students.

“I miss being able to talk to friends in the dining halls at a moment’s notice,” Herbig said.

McCombe also misses the social interaction that in-person classes offer and prefers them to online learning.

Professors have been trying to adjust to the new online medium which has presented challenges to those who are used to in-person classes.

Paula Frasz, professor of dance, has found the lack of immediate feedback one of the biggest challenges as a professor.

“Even when they said a video, immediate feedback isn’t possible,” Frasz said. “In a group setting, we learn by watching others and now we’re missing that interaction.”

However, due to the online medium, professors have found new ways to engage their students. Frasz said she has found a way for students to create their own types of dance at home. The project revolves around Frasz sending her students a short video of natural movements and having her students send her back a video of movement.

“I saw a vulture gliding around and moving its head and I sent it to my students,” Frasz said. “I don’t want them to imitate a vulture, I want them to be inspired by movement.”

After 30 videos, students will compose a nature study of all of the movements they put together. This project serves as a way for Frasz to connect to her students every day, Frasz said.

Another professor navigating this new type of learning is Bobby Broom, professor of Jazz Studies specializing in guitar, who is currently teaching two classes and 10 NIU students in private lessons. When the semester switched to online courses, Broom said he felt concerned because this is his second semester at NIU and he felt that he was finally getting used to life at NIU.

“I just immediately started to envision what I do and what I can do to adjust to switching online,” Broom said.

Despite not being in the same room as his private students, Broom feels that the student-teacher relationship has grown stronger.

Broom also had a guest speaker talk to his class through the Zoom app, which allows multiple people to engage in video conferences at the same time.

“This is an opportunity to become aware of some alternative ways of teaching,” Broom said. “Part of the discipline of being a musician, especially in jazz, is trying to learn, adapt and evolve in what we do.”

Due to the stay-at-home order issued by Gov. Pritzker, feelings of cabin fever have begun to accumulate. Both students and professors have been trying to find different ways to relieve themselves of boredom.

“I’ve been feeling very uncomfortable spending this much time by myself with no fixed schedule,” Herbig said. “To help alleviate that, I’ve started spending a lot more time outside than usual since I live in a rural area and don’t have to stay inside to avoid getting infected.”

Going outside and getting fresh air has been a popular activity to suppress feelings of cabin fever. Broom has found solace in going outside into his backyard and exercising. With his family, Broom enjoys biking, driving and walking his dog when the weather is nice and they are far away from other people.

Frasz has spent time outdoors as well as going on walks with her dog and going horseback riding at her home. She also enjoys exercise because of how physical activity releases positive chemicals in the brain.

Because there are five dance students still living in New Hall and the dining halls are open from 11 a.m. to 1 p.m. and from 4 to 6 p.m., Frasz has started dropping off healthy foods like soup and fruit for her five students to eat so they don’t have to resort to food from local gas stations.

“This is a bit of an offering to look at what we’re doing in a different light,” Broom said.