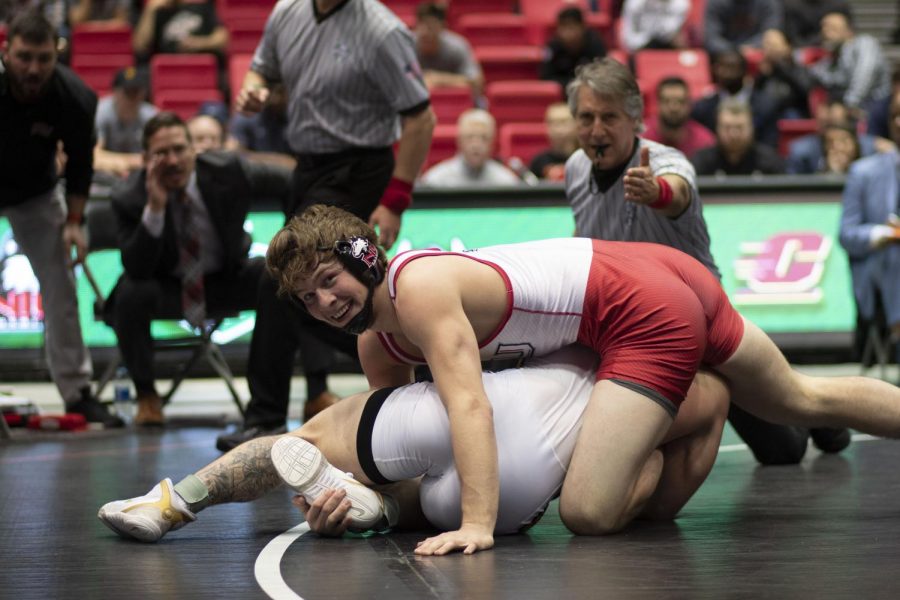 Then-redshirt sophomore Brit Wilson smiling as he holds redshirt senior Dylan Wisman to the mat March 8, 2020 upon realization that he would be crowned Mid-American Conference Champion at the Convocation Center. The 2020 NCAA Wrestling Championships was ultimately canceled due to the COVID-19 pandemic.

Wilson, a runner up last season at 174 lbs., beat defending 184-lbs. champion redshirt senior Dylan Wisman from the University of Missouri by a 8-5 decision after being tied at 4-4 going into the third period. Tied at 4-4 after the second period, Wilson secured a pair of takedowns in the final period to take the individual championship title.

“It feels good knowing that all this work I’ve been putting in here at NIU is paying off,” Wilson said. “It’s great knowing I’ve got these coaches and my teammates behind me and always pushing me. Coming out here and getting this MAC Championship, it feels really good.

Olejnik, who defeated Keller earlier this season, said the champion set the tone early in their rematch.

“It’s just wrestling,” Olejnik said. “Anybody can be beaten on any day. I think he came out and set the pace early, but I think I responded well in the third period; [I] just ran out of time.”

The Huskies finished with 90.5 points for their best team finish since 2009. Only Missouri and Central Michigan University bested the host team of NIU.

Head Coach Ryan Ludwig, who was named MAC Co-Head Coach of the Year, said the program has a bright future with its many young rising stars.

“These guys did a fantastic job fighting for those points, from our seniors on down to our redshirt [first-years],” Ludwig said. “We really believe strongly in this group and where they’re heading. They’re working hard every day to try and break through at the national level.”

Braun was tied at 7 with his opponent, CMU redshirt junior Landon Pelham, who then possessed a ride point in the closing seconds of the third period. With two seconds left, Braun secured a takedown and picked up the 9-8 decision win after the takedown was confirmed by review.

“I knew there was time on the clock,” Braun said. “The coaches really preach wrestling for seven minutes, and I knew it was possible. I wrestled those last two seconds, and it worked itself out.”

In what may be the final tournament of his collegiate career, redshirt senior Kenny Moore had a career-high finish of fifth at 174 lbs. The San Diego native said his final MAC tournament was huge for him, and he hopes he can finish his career in the NCAA Championships with an at-large bid.

“This weekend means a lot,” Moore said. “Everything I’ve worked for my whole career was leading up to this point. [I] definitely feel like I gave it my all — didn’t leave anything out there. I wish I could say I earned a spot, but hopefully I can get a bid. I gave it my all, and our team gave it their all.”

Redshirt sophomore 125-pounder Bryce West won his seventh-place bout with Bloomsburg University first-year Christian Gannone by a 9-6 decision. West trailed throughout the bout, but a late nearfall and ride point helped him pick up his second victory over Gannone on the weekend.

The postseason continues for NIU and the rest of the MAC, and will turn its attention to the NCAA Championships starting March 19 at U.S. Bank Stadium in Minneapolis. National champions will be crowned in each weight class at the tournament’s finale March 21.