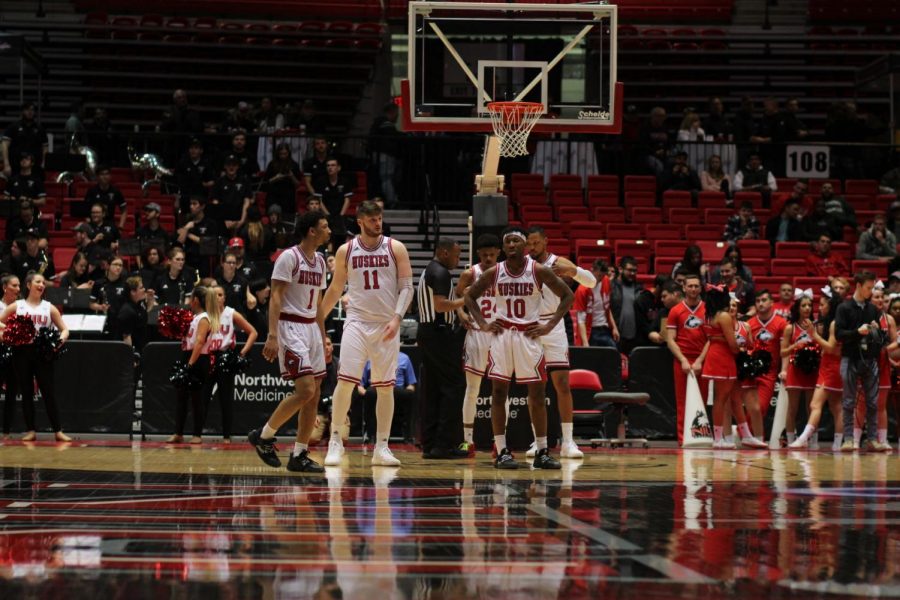 It wasn’t supposed to end this way.

Over the last two months, the men’s basketball team accomplished things that hadn’t happened here in DeKalb for a while. They won a share of the Mid-American Conference West Division for the first time since 2006. They won six straight conference games for the first time in school history, and their 18 wins this season was only bested by three teams over the last 25 years.

They boasted a top 50 defense in the country, an electrifying player in senior guard Eugene German and a supporting cast that with work and maturity will emerge as key contributors in the future.

The program could become very upwardly mobile in the next 2-3 seasons. If Head Coach Mark Montgomery and his staff can plug the holes left by the departure of not only German, but senior forward Noah McCarty and redshirt senior Lacey James, this isn’t the last time we will see this team at such lofty heights.

That’s all well and good for the future, but not now.

This team headed to Cleveland as the fourth seed and were set to take on Miami University-Ohio, in the MAC Tournament quarterfinals, but never saw the floor as the sports world went through its most tumultuous 48 hours ever.

Sports all over the world are shut down for the time being, leaving these Huskies without an opportunity to add to their legacy. Though the road to the NCAA Tournament would’ve meant likely beating two of the top three seeds in the draw, all anyone wanted was a chance.

This team doesn’t get that. While the NCAA is discussing ways to give spring sport athletes an extra year of eligibility, hundreds of basketball careers all over the country are over forever.

That means that the Huskies’ final game will be a 21-point loss on their home floor to Ball State University. That means that this team, especially the seniors, will take away a memory of that game, of the Cardinals taunting and playing to the crowd as they built a huge second-half lead. They derived a lot of pleasure in administering that beatdown, especially on Senior Night.

No one deserves to have that happen to them, of course. This team certainly didn’t. That loss wasn’t who these guys were. All season long, they played with toughness and confidence. Even their losses were close. They just ran into a buzzsaw on a bad night.

The Huskies thought they could go to Cleveland and make things right, perhaps even beating BSU Saturday in a possible rematch in the championship game. It’s all the players and coaches talked about: “We’re just excited to be going to Cleveland.”

Judging by the players’ reactions on social media, they were devastated. The second chance they wanted will never come. All any athlete wants is the chance to compete, to win or lose on their own terms. They can live with that, regardless of the result.

That’s not going to happen. Of course, the decision to cancel the tournament was the right one. People are getting sick; people are dying. If the steps being taken right now saves people’s lives, the inconveniences we have to deal with over the next few weeks will beworth it.

This stings badly for a lot of people who were all-in and invested in this team. For those of us who weren’t part of that inner circle, it’s still disappointing. I’ll admit that I am one of them. I was looking forward to covering a game in an NBA arena for the first time and seeing what this team could do. I really believed in them; they had a legitimate chance to win the MAC Tournament.

I was looking forward to covering the tournament with my editor, Jarrett Huff, because he really, really gets it. He has such a passion for sports, writing and photography, and I was excited for the content we were going to send back. Like, award-winning content. We’ll get that chance next year.

When all of this is over, German, James and McCarty will walk across the stage and receive their degrees and go on with their lives. Next year’s team will assemble in June to start preparing for the season.

Life always goes on, maybe not in the way we want, but it still does.

I guess the thought I have about this whole situation is this team didn’t need Cleveland to establish a legacy. It would’ve been nice, and probably a lot of fun, but they didn’t need it.

That legacy was established over the 31 regular season games over the last four months. This team played hard and with class. They openly rooted for each other. They won a lot of games and established a foundation for the teams coming after them.

Personally, they were fun to watch and great to deal with. Although I am part of the media, I have no problem admitting that dealing with us can be a pain. Montgomery, who, by the way, is a great guy, and his players sat in front of us and praised their teammates when they won, and didn’t make excuses when they lost.

“What if?” will always be in everyone’s minds when it comes to the 2019-20 basketball season, but history will be very kind to this team.

They didn’t need Cleveland to show that they were winners, they already had that locked up.