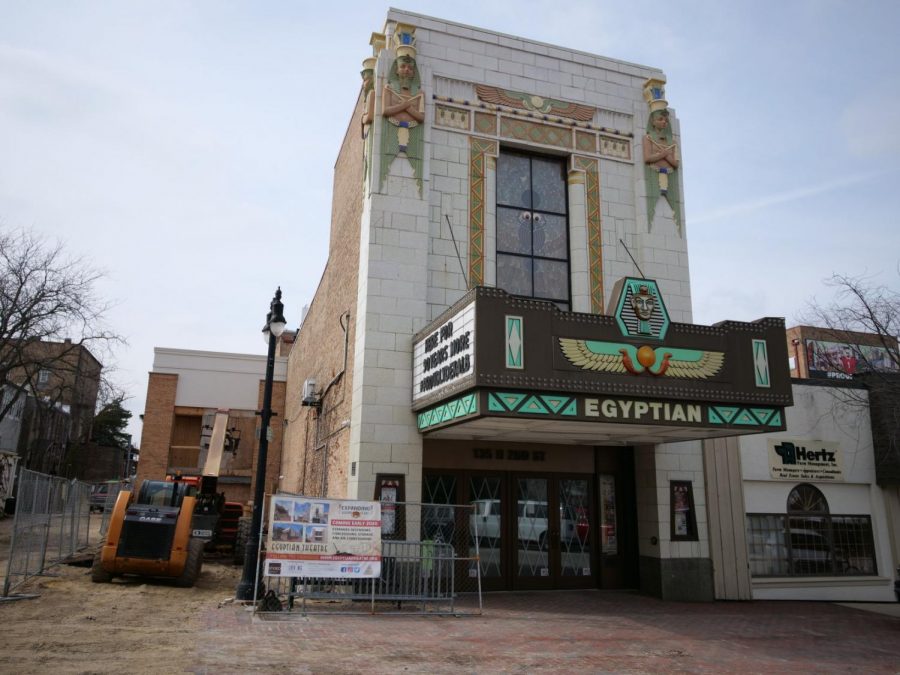 The Egyptian Theatre sits closed March 24 due to the COVID-19 pandemic.

DeKALB — The entertainment industry has slowed down due to lockdowns across the world in light of COVID-19. Locally, the Egyptian Theatre, 135 N. Second St., has closed because of the nationwide quarantine which has meant the postponement of concerts and screenings. However, the theatre’s “Hard Hat Tours” will continue through digital live streaming amidst the ongoing expansion of the Egyptian Theatre.

Originally, the tours lasted an hour and served as both a tour of the theater as well as showing off the expansion project, Jeanine Holcomb, marketing and communications director of the Egyptian Theatre, said. They were hosted at 5:30 p.m. Tuesday, were free of charge and open to the public. The expansion is expected to be relatively finished in June with final touches continuing until the end of July.

These tours will continue through the pandemic virtually so that the community can see what is happening to the Egyptian Theatre. Unlike the in-person tours, the virtual tours will only last ten minutes and will feature a staff member of the Egyptian Theatre talking about the latest additions to the theater during construction, Holcomb said.

A video of a full one-hour tour, filmed March 17, can be found on the YouTube channel as well so that viewers can have a full experience of the theater and get “caught up,” Holcomb said. It is expected that these virtual tours will last until the end of April.

Construction has not ceased on the theater’s expansion project, which began in May, although there have been some delays due to certain parts not being shipped from China, Holcomb said.

The expansion is still occurring but with a smaller crew of about two people due to safety concerns amidst the nationwide quarantine. Currently, the construction is focused on the interior of the Egyptian Theatre.

“The existing bathrooms are nearly gone, the concessions stand is completely gone and we are working on combining the old with the new,” Holcomb said.

When completed, the bathrooms on both the main floor and balcony will be expanded with more stalls and sinks in the women’s bathroom in addition to more urinals in the men’s bathroom, according to the Egyptain Theatre’s website. The concessions stands will be expanded as well, with the current two stations doubled on the first floor and two new stations added to the balcony which previously had no concessions.

As a result of the quarantine, The Egyptian Theatre has had to postpone many events including the 35 mm screenings of “Gone With The Wind” and “The Sound of Music,” a concert from Resurrection: A Journey Tribute and the screening of “The Rocky Horror Picture Show.” However, many events will be pushed back to the summer when the Egyptian Theatre will have air-conditioning for the first time since it opened Dec. 12, 1929.

“We are lucky that we have a whole summer to host things instead of having to cancel due to no [air-conditioning],” Holcomb said. “We’ve never had to [be closed] to this magnitude, and it’s a whole new ballgame, but the Egyptian Theatre has made it through The Great Depression and World War II. The Egyptian will survive.”