The show must go on for theatre students 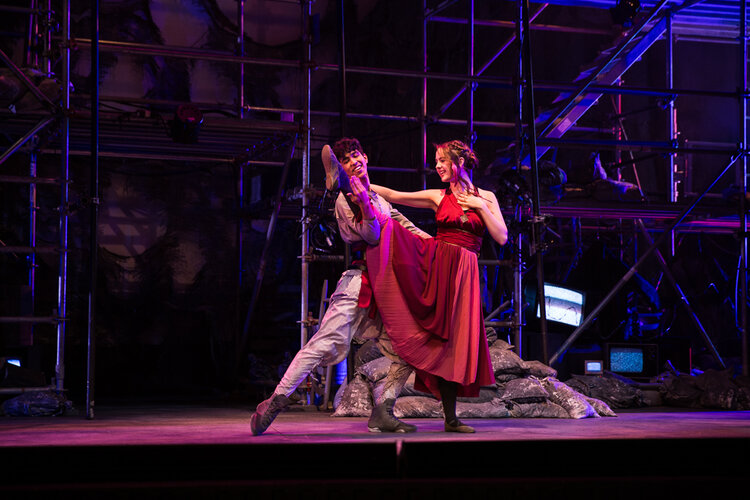 Taken during NIU’s production of "Troilus and Cressida." Paris (Vincent Juarez) is dancing with the face that launched a thousand ships, Helen.

Being a student of NIU’s School of Theatre and Dance means fully committing to performing in front of an audience. In spite of campus being closed because of concerns of the COVID-19 pandemic, Vincent Juarez, sophomore acting student, continues to devote himself to the craft of acting, proving that the show must go on.

Currently taking courses in movement, dialect and acting, Juarez has found the online medium to be “quite a change” with scenes having to be acted in front of a computer screen instead of other people. This has created a disconnect because of technology errors and a lack of interaction.

“Movement class has been the most challenging because we have to work in our homes,” Juarez said. “There’s been a lot of adaptation to our current environment and I can’t do as much as I want because I don’t want to disturb my parents.”

This has also applied to his acting because Juarez can’t be as loud or move as much as his character would due to being in his home instead of in a large, studio space.

Another challenge Juarez has encountered is the postponement of the play he was acting in — the Pulitzer Prize winning play “The Time of Your Life.” Originally meant to be shown March 27, 28 and 29 and April 2, 3 and 4, “The Time of Your Life” tells the story of a group of people, many of them musicians and artists, in Nick’s Pacific Street Saloon, set in 1920s San Francisco.

When the show was postponed to the Fall Semester, Juarez thought that everyone involved “would have to drop the characters living inside of [them].” However, the cast is hard at work continuing to prepare for the show and the actors are “keeping their characters dormant and continue to live their lives.”

Because “The Time of Your Life” was postponed so close to its release date, the cast was prepared with their lines memorized and a clear idea as to how the show would play out, Juarez said. Now that the show is months away, Juarez is still preparing and developing his character.

When playing a character, Juarez, who plays a 12-year-old newsboy, tries to put himself in the characters he plays by learning their habits and trying to “walk around in their shoes.”

“My work is to get more out of these characters,” Juarez said. “I know what my mom fed me for breakfast and I also know how many newspapers I sold today.”

Despite having “The Time of Your Life” postponed to the beginning of the Fall 2020 semester and having to take classes online, Juarez has found positives with social distancing during the nation-wide quarantine.

“A lot of the work we do outside of school will be like this,” Juarez said. “We’ll have to do [professional] auditions online and we’ll have to be self-driven. This [the quarantine] has been preparing us and teaching us to find inspiration within ourselves.”

Juarez believes that this time has also shown just how important the arts are to people.

“When you’re stuck indoors and you can’t do anything, you turn to the arts,” Juarez said. “You sing, you dance and it’s fun to see that the arts are in every person.”