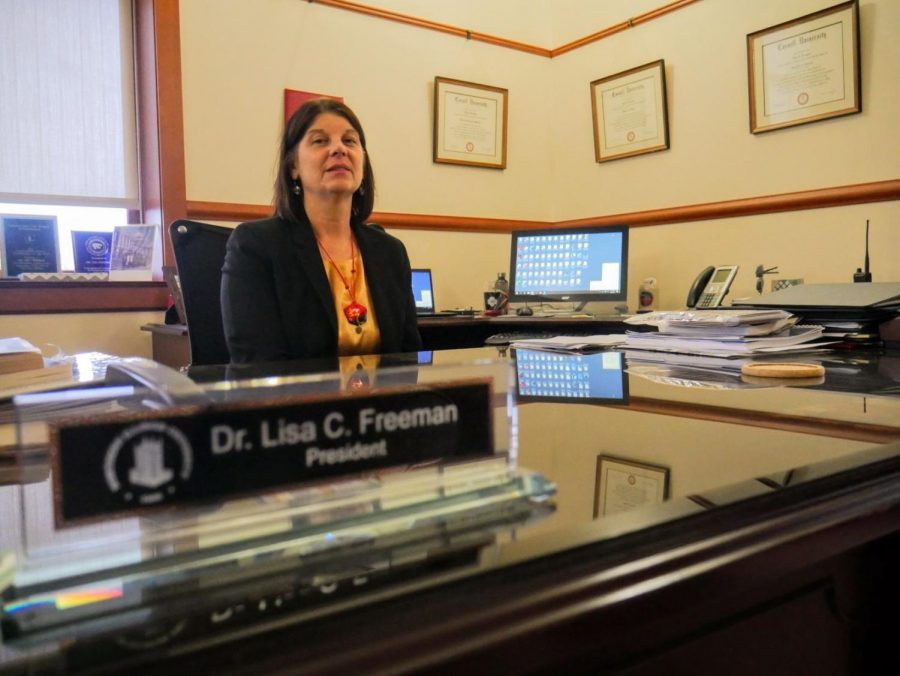 NIU President Lisa Freeman sits in her office at Altgeld Hall. The Board of Trustees granted her the power to suspend any board policies while Illinois is under a state of emergency.

The abrupt disruption of life caused by the COVID-19 pandemic has led to many decisions that effect student life at NIU, including the Board of Trustees’ decision to grant NIU President Lisa Freeman expanded authority. The board’s decision was made during its March 19 meeting and will be reassessed during its May 14 meeting;  it allows Freeman the authority to suspend any board policies and regulations governing campus operations. But what exactly does that mean?

While Freeman has thus far exercised her new powers conservatively, they do still cover vast areas of policy worth being aware of. Campus operations, for example, could fall under every section of the board regulations, with the exception of Section I.

Section I of the regulations covers academic programs regarding degrees, the academic calendar and grants and contracts, among other things. In these cases, the president does not have sole authority and must still confer with the board.

Subsections in Section II of the board regulations have seen changes. This section includes policies concerning employment, salary adjustments and staff reductions.

Freeman has used her authority to alter Section II subsection D of the regulations, which covers employee benefits. Chief of Staff Matt Streb, who is also a liaison to the board, said Freeman did this to adjust the sick day policy to allow for more forgiveness under current circumstances.

Freeman also used the expanded authority to open up NIU facilities for other uses during the pandemic. For example, Freeman announced April 3 that the Holmes Student Center hotel would be used as alternative housing for those unable to self-quarantine.

Streb said Freeman’s power is “limited in scope,” and the thinking behind granting the expanded authority was to help the university move efficiently during this time of rapid change. He said in order to make such changes to policies such as the sick policy, it would take far longer if the board had to go through its normal procedures.

“The power is very limited, but it’s a big thing,” Streb said. “I don’t want to make it sound like a small thing. We still have to make sure the president is communicating changes and reporting those changes.”