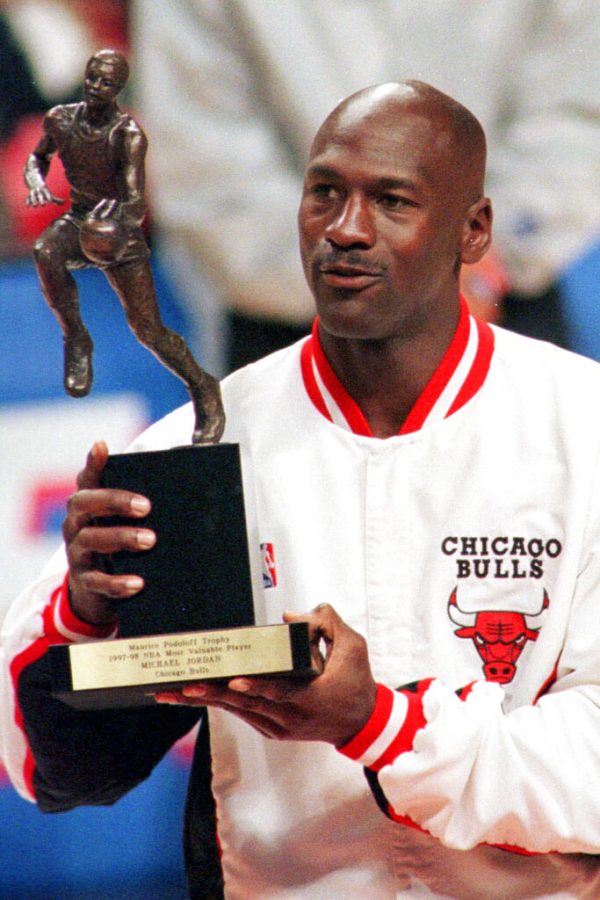 In this May 19, 1998, file photo, Chicago Bulls' Michael Jordan looks at the MVP award presented to him before the Bulls-Indiana Pacers playoff game in Chicago. Jordan described his final NBA championship season with the Chicago Bulls as a “trying year.” “We were all trying to enjoy that year knowing it was coming to an end,” Jordan told Good Morning America on Thursday, April 16, 2020. Jordan appeared on the show via video conference from his home in Florida to promote the “The Last Dance,” a 10-part documentary series focused on the final year of the 90′s Bulls dynasty that won six NBA titles in eight years. (AP Photo/Frank Polich, File)

Episodes three and four of ESPN 30 for 30’s “The Last Dance” aired Sunday, giving us arguably some of the best two hours in the documentary series’ history.

From Ron Harper’s criticism of Cleveland Cavaliers Head Coach Lenny Wilkens decision to have Craig Ehlo guard Michael Jordan on “The Shot” play, to Jordan snitching out Scott Burrell’s partying back in 1998, to Craig Sager slipping Dennis Rodman a $20 bill to “pay for his fine,” the series’ latest episodes were packed full of great moments.

Among the best, however, were Jordan and Horace Grant’s takes on the late ‘80s and early ‘90s Detroit “Bad Boys” Pistons and their rivalry with the Bulls. Between Jordan’s unamused expression while watching Isiah Thomas’ recount of when the Pistons left the bench before Game 4 of the 1991 Eastern Conference Finals was over and Grant calling them “straight up bitches,” one thing was pretty clear: there’s still a lot of bad blood between the players from the rivalry.

In the defense of Jordan and the rest of the Bulls from that era, it’s completely understandable that they hold some resentment toward Thomas and his team, which even included Dennis Rodman, John Salley and James Edwards, as the three former Pistons would join Jordan in his quest for a fourth NBA title in 1996.

The Bulls and Pistons met four times in the playoffs between 1988-1991, including three consecutive ECF matchups. In the first three series between the teams, the Pistons defeated the Bulls, employing dirty tactics to physically and mentally wear down the Bulls, Jordan especially. It went so far to where the players and coaches had established tactics called “The Jordan Rules,” which highlighted how to stop, or essentially take Jordan out based on what he did on offense.

“What I figured out is Jordan wasn’t as good going left as he was right… their offensive scheme allowed us to force him left and double team him.” @IsiahThomas breaks down the strategy behind the ’Jordan Rules’ to @Chris_Broussard 📝 pic.twitter.com/N9TOPdMJDQ

Finally, in 1991, the Bulls were able to get over the hump, sweeping the Pistons in four games. With less than eight seconds remaining in the Game 4, Pistons center Bill Laimbeer convinced Thomas and most of the other players on the bench to walk off the floor early to avoid shaking hands with the Bulls when time would expire, staying true to the team’s moniker.

To no surprise, Laimbeer does not appear in the documentary, and spoke on ESPN’s “The Jump” Monday about how he has no regrets from not shaking the Bulls’ hands, calling them “a bunch of whiners.” Clearly Laimbeer hasn’t changed in 29 years.

Thomas defended Laimbeer and the Pistons’ stance by highlighting how the Boston Celtics walked off the court in similar fashion when the Pistons defeated them in the 1989 ECF, saying it was how the torch was passed. Jordan didn’t subscribe to the idea, pointing out the Bulls shook their hands after Game 7 in the 1990 ECF.

Sadly, in recent years, heated rivalries in the NBA such as the Bulls versus Pistons have gone to the wayside. Sure, every once in a while a good one pops up, but they’re usually short-lived or pretty one-sided, lacking the overall feel of the rivalries from the ‘80s, ‘90s and 2000s.

There are a few reasons for that, as the current NBA era doesn’t really allow for long-standing team versus team rivalries to grow.

One reason is that NBA front offices aren’t as patient anymore when it comes to building teams and competing. Teams can make the Conference or NBA Finals one season, lose, and have their rosters blown up that summer. It doesn’t allow for teams to continuously run into each other.

Gone are the days where a team like the ‘80s and ‘90s Utah Jazz built a contender with John Stockton and Karl Malone, who were drafted by the team in 1984 and 1985 respectively, and kept trying until they finally made the NBA Finals in 1997 and 1998. That’s 12 years of failing before making a Finals appearance. Franchises hardly wait a quarter of that time nowadays to do so.

A second reason is player movement has changed a lot. Players like Kobe Bryant and Dirk Nowitzki, who retired within the last few seasons, played their entire careers with one franchise. Many stars nowadays end up playing for three or more different teams by the time their careers are called. This is due in part to players not trusting franchising as much due to their willingness to move off loyal players with little thought. It’s led to players demanding off of teams or even refusing to play, essentially holding out while still under contract. Players have a lot of power these days.

After Leonard pushed George to find a way to get to the Clippers, Paul George approached the team and requested a trade, league sources tell ESPN. OKC was left with no choice and made the best out of a difficult situation, per sources.

The third reason is player to player relationships. In Jordan’s time, there was no AAU basketball, which means many NBA players didn’t come across other NBA players until college. Current NBA players have known many of their peers since high school or even longer. This has allowed for many friendships to start well before the NBA.

I want to make it clear: I’m not advocating for bad relations between players and for people to hate one another. In my opinion, this is one of the reasons why we haven’t seen the heated rivalries of decades past.

Because of these friendships, we’ve seen a lot of stars team up with their friends, like LeBron James, Dwyane Wade and Chris Bosh with the 2010-2014 Heat or Russell Westbrook and Paul George with the 2017-2019 Thunder. This sort of draws back to my second reason. While it may be fun to watch great players team up and play together, it doesn’t really allow for rivalries to form, especially within their conferences, with stars moving teams so frequently at an unprecedented rate.

“The Last Dance” has made it fun for fans and possibly even former players to look back on old rivalries, even giving the younger generation a taste of what the NBA was like before their time. It has, however, outlined the stark difference between leagues like the NFL, NHL, MLB and today’s NBA, as the basketball league’s rivalries, even between teams that are historically rivals, lack a certain luster that the former all have.